Victor Arbuckle (aged 29), a member of the Royal Ulster Constabulary (RUC), was shot dead by Loyalists during street disturbances on the Shankill Road in Belfast.

Two Protestant civilians were shot dead by the British Army during rioting.

Killed by: British Army (BA)
Shot during street disturbances, at the corner of Shankill Road and Downing Street, Belfast

The first deaths of the Troubles occurred in July 1969. Francis McCloskey, a 67-year-old Catholic civilian had been found unconscious on 13 July near the Dungiven Orange Hall following a police baton charge against a crowd who had been throwing stones at the hall.

Witnesses later said they had seen police batoning a figure in the doorway where McCloskey was found, although police claimed that he had been unconscious before the baton charge and may have been hit with a stone. He was taken to hospital and died the following day.

On 11 October 1969, Constable Victor Arbuckle was shot dead by loyalists on Belfast’s Shankill Road during serious rioting in protest at the recommendations of the Hunt Report. Arbuckle was the first police fatality of the Troubles.

In August 1970, two young constables, Donaldson and Millar, died when an abandoned car they were examining near the strongly republican town of Crossmaglen exploded. They became the first security forces victims of the Provisional Irish Republican Army campaign.

This campaign involved the targeting of police officers, and continued until the final ceasefire in 1997, as the peace process gained momentum.

The last RUC officer killed, Constable Francis O’Reilly (a Catholic), was also killed by loyalists, in a September 1998 bombing during the Drumcree conflict. 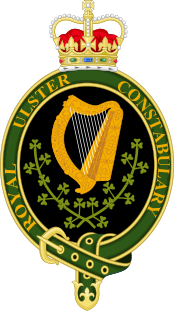 Badge of the Royal Ulster Constabulary

At its peak the force had around 8,500 officers with a further 4,500 who were members of the RUC Reserve.

During the Troubles, 319 members of the RUC were killed and almost 9,000 injured in paramilitary assassinations or attacks, mostly by the Provisional IRA, which made the RUC, by 1983, the most dangerous police force in the world in which to serve.

In the same period, the RUC killed 55 people, 28 of whom were civilians.

The RUC has been accused by republicans and Irish nationalists of one-sided policing and discrimination, as well as collusion with loyalist paramilitaries. Conversely, it was praised as one of the most professional policing operations in the world by British security forces.

The allegations regarding collusion prompted several inquiries, the most recent of which was published by Police Ombudsman Nuala O’Loan. The report identified police, CID and Special Branch collusion with loyalist terrorists under 31 separate headings, in her report on the murder of Raymond McCord and other matters, but no member of the RUC has been charged or convicted of any criminal acts as a result of these inquiries. Ombudsman Dame Nuala O’Loan stated in her conclusions that there was no reason to believe the findings of the investigation were isolated incidents.

See here for more details on the RUC

See here for RUC deaths in the Troubles :

During 12–17 August 1969, intense political and sectarian rioting took place in Northern Ireland. There had been sporadic violence throughout the year arising from the civil rights campaign, which was demanding an end to discrimination against Irish Catholics. Civil rights marches were repeatedly attacked by both Ulster Protestant loyalists and by the Royal Ulster Constabulary (RUC), a unionist and largely Protestant police force.

The disorder led to the Battle of the Bogside in Londonderry, a three-day riot in the Bogside district between the RUC and the nationalist/Catholic residents. In support of the Bogsiders, nationalists and Catholics launched protests elsewhere in Northern Ireland. Some of these led to attacks by loyalists working alongside the police. The most bloody rioting was in Belfast, where seven people were killed and hundreds more wounded. Scores of houses, most of them owned by Catholics, as well as businesses and factories were burned out. In addition, thousands of mostly Catholic families were driven from their homes. In certain areas, the RUC helped the loyalists and failed to protect Catholic areas. Events in Belfast have been viewed by some as a pogrom against the Catholic and nationalist minority.[1][2]

The British Army was deployed to restore order and state control, and peace lines began to be built to separate the two sides. The events of August 1969 are widely seen as the beginning of the thirty-year conflict known as the Troubles.