Two Catholic civilians were killed in separate attacks in Belfast by Loyalist paramilitaries.

The Irish Republican Army (IRA) explode seven bombs in a series of attacks in the West End of London. 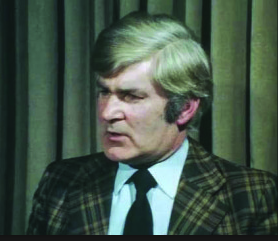 John McKeague, who had been a prominent Loyalist activist, was shot dead by the Irish National Liberation Army (INLA) in his shop, Albertbridge Road, Belfast.

See below for more details on John McKeague

The New Ulster Political Research Group (NUPRG), an organisation associated with the views of the Ulster Defense Association (UDA) and whose chairman was then John McMichael, published a document called Common Sense.

The document proposed a constitutional conference, a devolved assembly and a coalition government.

US Visa Given to Adams

Bill Clinton, then President of the United States of America (USA), ordered that Gerry Adams, then President of Sinn Féin (SF), should be given a ‘limited duration’ visa to enter the USA to address a peace conference. [The decision was supported by the National Security Council and Irish-American Senators but was taken against the advice of the State Department and the British government.]

The Social Democratic and Labour Party (SDLP), the Ulster Democratic Party (UDP) and the Progressive Unionist Party (PUP), held their first meeting under the ‘twin-track’ negotiations.

Tony Blair, then British Prime Minister, announced a new inquiry into the events surrounding ‘Bloody Sunday’ in Derry on 30 January 1972. Relatives announced that they could now consider Lord Widgery’s report to be “dead.”

[The new inquiry was to be known as the Saville Inquiry.]

Six members of one family escaped injury after a pipe-bomb was left in their refuse bin. The device was uncovered just after midnight at the rear of a house in a predominantly Nationalist estate in Greencastle. The attack was carried out by Loyalist paramilitaries.

A Catholic couple escaped injury when a pipe-bomb was thrown through the living room window of their home in Coleraine, County Derry, shortly before midnight.

Just over an hour earlier the home of a Catholic mother-of-two was targeted in the Harpurs Hill area of Coleraine.

The woman was in her kitchen when a pipe-bomb was thrown through the window. It landed on the floor but failed to explode. The Royal Ulster Constabulary (RUC) said that both attacks were sectarian. The attacks were carried out by Loyalist paramilitaries.

[There was a petrol-bomb attack on flats in Ormeau Road, south Belfast, at approximately 9.50pm (2150GMT). The device caused scorch damage to the building but there were no injuries. It was not clear if the attack was sectarian.]

A Social Democratic and Labour Party (SDLP) delegation travelled to Downing Street, London, for a meeting with Tony Blair, then British Prime Minister. The meeting discussed the controversy over the investigation of the Omagh bombing and also reforms to the criminal justice system in Northern Ireland.

There were media reports that members of the security forces would soon lose the right not to have to give evidence at inquests. British Army soldiers and police officers are currently exempt from being compelled to attend inquests when they have been involved in fatal shootings. The change was expected to be introduced by the British government sometime in February 2002.

Solectron, an American company with a factory in Carrickfergus, County Antrim, announced that it was entering a 90-day consultation with its workforce over the future of the plant. It was reported that 200 jobs would be lost. The job losses are a direct result of the problems facing the telecommunications company Nortel – which have resulted in the loss of more than 1,000 jobs in Northern Ireland