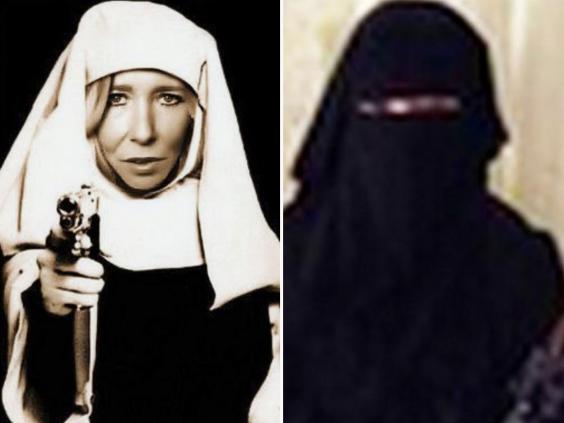 Sally Jones, who left the UK to join the extremist group of ISIS, has threatened to blow herself up after her husband was killed in a drone strike in Syria’s Raqqa.

Jones, 47, is a former punk rocker, originally from Kent. She has converted to Islam and has been radicalized recently through direct contact with terrorist groups online.

Quoting a Muslim extremist woman who killed herself along with scores of Russian soldiers in a truck bombing in 2000, Jones has expressed herself on the social media that she could be about to become a “black widow” suicide bomber.

The term “Black Widows” refers to a group of Chechen Muslim women whose husbands were killed by the Russian forces in Chechnya.

She moved to Syria with her 10-year-old son in 2013 and joined ISIS after being brainwashed.

“I know what I’m doing. Paradise has a price and I hope this will be the price for Paradise,” Jones tweeted. If she carried out her threat, she would be ISIS’s first widely known female suicide bomber.

Her husband Junaid Hussain, 21, was a cyber-hacker and a key propagandist and recruiter for the ISIS terror group. He was killed in an airstrike in Raqqa, the major bastion of ISIS in Syria.

Jones has been following her husband’s path, recruiting young men and women to join ISIS’s ranks.

“I would never love anyone but him,” the extremist widow said on Tweeter, referring to her dead husband, though the group’s leadership prevents widows from staying a long time without husbands, according to ISIS-linked sources.

Jones’s message came after her husband found killed in an airstrike on Raqqa last August.

In a picture that looks like it could have been lifted from a family photo album, mother Sally Jones and her partner cradle her new-born son.

The new image shows Muslim convert Jones, 45 – who spent a lifetime on benefits – looking lovingly into the camera as she holds her baby boy, just hours after he was born on December 19, 2004.

But ten years later the mother-of-two fled from Britain to Syria to join bloodthirsty ISIS militants.

Jones, from Chatham in Kent, also known as ‘Mrs Terror’, was one of four Britons suspected of leading recruitment drives and plotting terrorist attacks against the UK and elsewhere added to a United Nations list.

The other three are Omar Hussain from High Wycombe, Nasser Muthana from Cardiff and Aqsa Mahmood from Glasgow.

The Women of ISIS

Back in the UK She played in a punk band back in Britain called Krunch. Now Sally Ann Jones is looking to raise holy hell online for the Islamic State.
A navel-baring British punk rocker turned Islamic State widow she is now aiming for a leadership role in the terror group’s cadre of hackers and online recruiters, United States officials believe.

Should she succeed, Sally Ann Jones, 45, would become ISIS’s most public European national to openly threaten U.S. and U.K. networks. She also would likely become the most influential woman in the so-called Islamic State, widely known as ISIS, transforming her into a key operational figure.

See Islamic State of Iraq and the Levant