Veronica Guerin (5 July 1958 – 26 June 1996) was an Irish crime reporter who was murdered on 26 June 1996 by drug lords, an event which helped establish the Criminal Assets Bureau.

The daughter of accountant Christopher and his wife Bernadette,  Veronica was nicknamed “Ronnie.” She and her four siblings were born and brought up in Artane, Dublin, and attended Catholic school where she excelled in athletics. Besides basketball and camogie, aged 15 she played in the all-Ireland football finals with a slipped disc.  Guerin studied accountancy at Trinity College, Dublin.

Guerin married Graham Turley, and the couple had a son Cathal. A big fan of Manchester United football team, her prized possession was a photo of her and Eric Cantona taken on a visit to Old Trafford.

After she graduated, her father employed her at his company; but following his death three years later, she changed professions and started a public relations firm in 1983, which she ran for seven years.

In 1983–84, she served as secretary to the Fianna Fáil group at the New Ireland Forum.[5] She served as Charles Haughey‘s personal assistant, and became a family friend, taking holidays with his children. In 1987 she served as election agent and party treasurer in Dublin North for Seán Haughey.

In 1990, she changed careers again, switching to journalism as a reporter with the Sunday Business Post and Sunday Tribune, working under editor Damien Kiberd. Craving first-hand information, she pursued a story directly to the source with little regard for her personal safety, to engage those she deemed central to a story. This allowed her to build close relationships with both the legitimate authorities, such as the Garda Síochána (police), and the criminals, with both sides respecting her diligence by providing highly detailed information. She also reported on Irish Republican Army activities in the Republic of Ireland.

From 1994 onwards, she began to write about criminals for the Sunday Independent. Using her accountancy knowledge to trace the proceeds of illegal activity, she used street names or pseudonyms for underworld figures to avoid Irish libel laws.

When she began to cover drug dealers, and gained information from convicted drugs criminal John Traynor, she received numerous death threats. The first violence against her occurred in October 1994, when two shots were fired into her home after her story on murdered crime kingpin Martin Cahill was published. Guerin dismissed the “warning”. The day after writing an article on Gerry “The Monk” Hutch, on 30 January 1995, she answered her doorbell to a man pointing a revolver at her head. The gunman missed and shot her in the leg. Regardless, she vowed to continue her investigations. Independent Newspapers installed a security system to protect her, and the police gave her a 24-hour escort; however, she did not approve of this, saying that it hampered her work.[citation needed]

On 13 September 1995, convicted criminal John Gilligan, Traynor’s boss, attacked her when she confronted him about his lavish lifestyle with no source of income. He later called her at home and threatened to kidnap and rape her son, and kill her if she wrote anything about him.

Guerin received the International Press Freedom Award from the Committee to Protect Journalists in December 1995.

On the evening of 25 June 1996, Gilligan drug gang members Charles Bowden, Brian Meehan, Peter Mitchell and Seamus Ward had met at their distribution premises on the Greenmount Industrial Estate. Bowden, the gang’s distributor and ammunition quartermaster, had supplied the three with a Colt Python revolver loaded with .357 Magnum Semiwadcutter bullets.

On 26 June 1996, while driving her red Opel Calibra, Guerin stopped at a red traffic light on the Naas Dual Carriageway near Newlands Cross, on the outskirts of Dublin, unaware she was being followed. She was shot six times, fatally, by one of two men sitting on a motorcycle.

About an hour after Guerin was murdered, a meeting took place in Moore Street, Dublin, between Bowden, Meehan, and Mitchell. Bowden later denied under oath in court that the purpose of the meeting was the disposal of the weapon but rather that it was an excuse to appear in a public setting to place them away from the incident.

At the time of her murder, Traynor was seeking a High Court order against Guerin, to prevent her from publishing a book about his involvement in organised crime.[

Guerin was killed two days before she was due to speak at a Freedom Forum conference in London. The topic of her segment was “Dying to Tell the Story: Journalists at Risk.

Her funeral was attended by Ireland’s Taoiseach John Bruton, and the head of the armed forces. It was covered live by Raidió Teilifís Éireann. On 4 July, labour unions across Ireland called for a moment of silence in her memory, which was duly observed by people around the country. Guerin is buried in Dardistown Cemetery, County Dublin.

Guerin’s murder caused outrage, and Taoiseach John Bruton called it “an attack on democracy”. The Oireachtas, the Irish parliament, realised the potential of using tax enforcement laws as a means of deterring and punishing criminals. Within a week of her murder, it enacted the Proceeds of Crime Act 1996 and the Criminal Assets Bureau Act 1996, so that assets purchased with money obtained through crime could be seized by the government. This led to the formation of the Criminal Assets Bureau (CAB).

After the murder of Guerin, Bowden was arrested as were the other members of Gilligan’s gang who were still in Ireland. In an agreement with the Attorney General of Ireland, Bowden agreed to turn state’s witness, and become the first person to enter the Republic of Ireland’s Witness Security Programme. Granted immunity from prosecution for the murder of Guerin, he was the only witness to give evidence against all four drug gang members at their trials in the Special Criminal Court: Patrick Holland, Paul “Hippo” Ward, Brian Meehan and John Gilligan. The investigation into Guerin’s death resulted in over 150 other arrests and convictions, as well as seizures of drugs and arms. Drug crime in Ireland dropped 15 percent in the following 12 months.

In 1997 while acting as a Garda witness, Bowden named Patrick “Dutchy” Holland in court as the man he supplied the gun to, and hence suspected of shooting Guerin. Holland was never convicted of the murder, and he denied the accusation up until his death in June 2009 while in prison in the UK.

In November 1998, after evidence from Bowden and others, Paul “Hippo” Ward was convicted of the murder and sentenced to life in prison as an accomplice, because he had disposed of the murder weapon and the motorbike. This conviction was later overturned on appeal.

Brian Meehan fled to Amsterdam with Traynor (who later escaped to Portugal). After the court dismissed additional evidence from Bowden, Meehan was convicted on the testimony of gang member turned state’s witness Russell Warren, who had followed Guerin’s movements in the hours before the murder, and then called Meehan on a mobile phone with the details. Meehan was convicted of murdering Guerin, and sentenced to life imprisonment.

John Gilligan left Ireland the day before Guerin was murdered, on a flight to Amsterdam. He was arrested 12 months later in the United Kingdom trying to board a flight for Amsterdam, after a routine search of his baggage revealed $500,000 in cash. Claiming it was the proceeds of gambling, he was charged with money laundering. After a three-year legal battle, he was extradited to Ireland on 3 February 2000. Tried and acquitted of Guerin’s murder, he was later convicted of importing 20 tonnes of cannabis and sentenced to 28 years in prison, reduced to 20 years on appeal.

Pursued by CAB, in January 2008, Gilligan made a court appearance in an attempt to stop the Irish State from selling off his assets. He accused Traynor of having ordered Guerin’s murder without his permission. Despite the presiding judge’s attempt to silence Gilligan, he continued to blame a botched Gardaí investigation and planted evidence as the reason for his current imprisonment. Traynor had fled to Portugal after Guerin’s murder, and having been on the run from British authorities since 1992, resided mainly in Spain and the Netherlands from 1996 onwards. After a failed extradition from the Netherlands in 1997, which brought Meehan back to Ireland, in 2010 Traynor was arrested after a joint UK SOCA/Regiokorpsen operation in Amsterdam. Traynor, as of 2013, is living in Kent, England after serving time in an English gaol. It is reported that he is still wanted for tax evasion in Ireland. 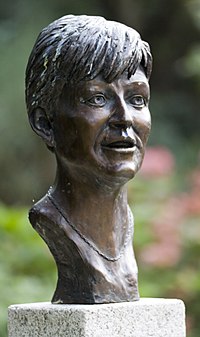 A memorial statue to Guerin is located in Dubh Linn Gardens, in the grounds of Dublin Castle.

On 2 May 1997, at a ceremony in Arlington, Virginia, her name and those of 38 other international journalists who died in the line of duty in 1996 were added to the Freedom Forum Journalists Memorial. Her husband addressed the audience:

“Veronica stood for freedom to write. She stood as light, and wrote of life in Ireland today, and told the truth. Veronica was not a judge, nor was she a juror, but she paid the ultimate price with the sacrifice of her life.”

In 2000, Guerin was named as one of the International Press Institute‘s 50 World Press Freedom Heroes of the past 50 years.

In 2007, the Veronica Guerin Memorial Scholarship was set up at Dublin City University, offering a bursary intended to meet the cost of fees and part of the general expenses of an MA in Journalism student who wishes to specialise in investigative journalism

The murder of Veronica Guerin