Horgan-Wallace’s mother was Sophia Horgan, a fashion designer, and her father is Steve Wallace, a car dealer. They separated when she was three years old.[1] She was raised as a Jehovah’s Witness by her mother in North London[2] and moved schools several times due to clashes with fellow pupils.[2] At the age of 16, Horgan-Wallace stopped living with her mother and stayed with friends before moving to a women’s hostel.[2][3] She was reunited with her father at the age of 18 after he tracked her down.[4]

It has been reported that Horgan-Wallace won a Prince’s Trust grant to take a beauty therapy course at college, and that she had jobs in shoe shops and as a promotions girl.[2] Her official biography states that she studied at the London College of Fashion, and that she took part-time promotional jobs to help fund her education.

Horgan-Wallace rose to become notable in the United Kingdom when she was selected as a contestant in the seventh series of the Channel 4 TV series, Big Brother, in 2006. She entered the Big Brother House on Day 12, and became known for her clashes with fellow contestants Nikki Grahame and Grace Adams-Short, and for being voted into the “House Next Door” by the public — a secret house, where she was forced to choose who, out of five new contestants, would become new housemates.[5][6][7][8][9][10] Horgan-Wallace reached the final on Day 93; she came third with 22% of the public vote.[11] She was the highest placed female housemate of the series.[12] It was reported that Horgan-Wallace’s popularity shocked the show’s producers, with tabloid sources suggesting that they had attempted to “engineer” the series’ finalists, and did not expect the swing in public support for her.[13]

In August 2010, she turned down an offer to appear in Ultimate Big Brother[14] in order to shoot her scenes as ‘Maria’ in the British urban comedy movie, Anuvahood instead. 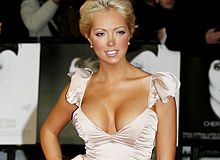 Since 2007, she has appeared in a number of episodes of Charlie Brooker’s Screenwipe. She has also presented for shows such as T4. She appeared in BBC One‘s Test The Nation, on a team with several other Big Brother contestants.[15] She also made a small appearance on The Charlotte Church Show. She appeared in several episodes of the Red TV series Celebrity: Stars at Work, which aired in December 2007 and January 2008.[16] Following on from this, Horgan-Wallace signed a one series contract with Red TV to film a self-titled, fly-on-the-wall documentary Aisleyne. Four episodes were broadcast, the first being aired on 5 March 2008.[17][18]

In June 2008, Horgan-Wallace made a guest appearance on a special edition of The Friday Night Project, which aired after the launch of Big Brother‘s ninth series.[19] Her contributions to the show included a sketch which mocked her rivalry with former housemate Nikki Grahame.[20] In August 2008, she made a brief cameo appearance in The Kevin Bishop Show. In October 2008 Aisleyne appeared in Channel 4 and E4’s horror Dead Set, which was written by Charlie Brooker. She played herself in this show. She featured in two episodes – episode 1.01 and episode 1.05. In episode 1.05 she played a zombie version of herself.

On 2 March 2009 Aisleyne underwent a make-under for the BBC Three programme Snog Marry Avoid?,[21] presented by Jenny Frost. She was persuaded that a more natural look suited her. In May 2009 she was interviewed for the E4/CH4 programme – Big Brother: A Decade in the Headlines, written and presented by Grace Dent.

In March 2010 she appeared as a guest diner on the Living TV programme, Celebrity Restaurant in Our Living Room. On 5 May 2011 she starred in an episode of Celebrity Hens and Stags for Wedding TV.[22] She helped organize a stag night in Edinburgh including racing in an off-road buggy. In June 2011 she appeared as a contestant[23] in the TV3 (Ireland) series, Celebrity Salon. She finished runner-up behind TV presenter, Alan Hughes.

In January 2012 she appeared in the third series of the Channel 4 show Celebrity Coach Trip, alongside fellow Big Brother alumna Nikki Grahame. The pair were given a red card on Day 3 of the series after clashes with older celebrities including Edwina Currie and Jean Broke-Smith. From December 2012, Horgan-Wallace became a regular guest on the Loaded TV chat show, Looser Women Live, a programme regularly hosted by her friend, the model and fellow reality TV star, Nicola McLean.

On 11 February 2015 she appeared as a claimant on the ITV daytime show Judge Rinder, in a case of unpaid debt against her fellow former BB7 contestant Michael Cheshire, winning her case.[24]

In June 2015, after plans were revealed regarding former “legendary” housemates returning to the Big Brother 16 House as part of “Time Warp” week, Horgan-Wallace was amongst many who were hotly tipped to re-enter. On Day 32, fellow BB7 contestant Nikki Grahame re-entered alongside Brian Belo and Helen Wood. It was later revealed that Horgan-Wallace was meant to enter the House on Day 39, however the plans were scrapped for unknown reasons.

On Day 44, during that week’s shopping task, Horgan-Wallace made her return to the House as the fourth “Time Warp” housemate.

After Big Brother, Aisleyne made numerous personal appearances in nightclubs around the UK. She hosted a show for the online radio station, Invincible,[27] was a guest commentator on BBC’s Asian Network[28] and made several guest appearances on Choice FM’s ‘Morning Vybe’ show.[15]

She worked as an agony aunt for More magazine[29] and wrote a weekly column for Reveal magazine covering Big Brother 8 as well as a daily blog on their website. She reprised this role for the programme’s ninth and tenth series.[30]

In September 2007, it was announced that she had taken control of her own career via her management company, Aisleyne Ltd, along with co-director Richard Skeels.

On 10 February 2008 Aisleyne released a fashion range named “Unique by Aisleyne”. She worked with the “high-end” fashion distributors Unique Collections Ltd, to design and produce the outfits. A complementary swimwear range was launched a few weeks later.[31]

It was announced on 24 April 2008, that Mainstream Publishing had bought the right to publish her autobiography, entitled Aisleyne: Surviving Guns, Gangs and Glamour.[32] This book was published on 7 May 2009. The launch party held on 6 May was attended by various celebrities, including Jodie Marsh, Charlie Brooker and Nate James.

Horgan-Wallace plays the character ‘Maria’ in the British film comedy Anuvahood, which was released in the UK on 18 March 2011.

On 10 June 2011 she was a judge in the Miss Universe Ireland beauty contest in Dublin.[34]

Horgan-Wallace plays the character of ‘Jasmine’ in the forthcoming low-budget British horror movie, Serial Kaller, which was filmed in April and May 2013.

In March 2014 she launched her own celebrity boot camp named Aisleyne’s Booty Camp,[35] based in a Country House near Grantham, Leicestershire.

Prior to her appearance on Big Brother,