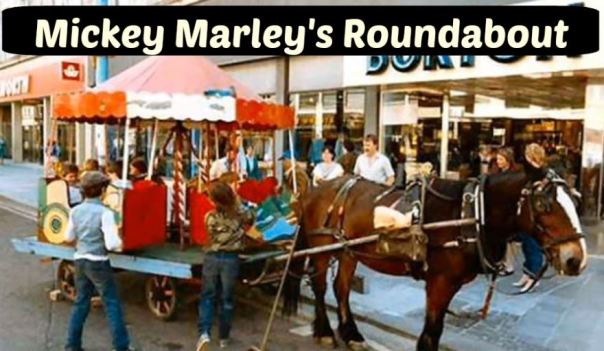 Mickey Marley and his roundabout are woven into the fabric of Northern Ireland’s tortured history and generations of Belfast folk, catholic and protestant alike will have fond memories of grumpy old Mickey and his horse drawn roundabout.

As a child I remember vividly riding on his roundabout one glorious summers day in the Woodvale Park and this memory  always brings a smile to my face. Life was simple and innocent back then and the joy of a ride soothed my childhood soul and the world seemed not so scary for a few short moments.

Thank you for the memories Mickey!

Born in the Markets area of Belfast, but spending most of his life on the Grosvenor Road in the Falls area of West Belfast, Marley was a common sight in Belfast City Centre for over forty years.

Drawn by his horse Joey Marley would tour the streets of Belfast with his hobby-horse roundabout. When he retired he sold the roundabout to the Ulster Folk and Transport Museum.

His local fame was enhanced by a recording of the song “Mickey Marley’s Roundabout” (written by Belfastman Seamus Robinson) which was a popular children’s request on BBC Radio Ulster. BBC Northern Ireland also made a documentary on his life. The 1973 film followed Marley’s everyday life, against the backdrop of the heavy British Army presence on the streets of Belfast during the early years of the Troubles

Round and round and up and down,
Through the streets of Belfast town,
All the children laugh and shout,”
“For here comes mickys roundabout”

The funeral of one of Belfast’s best known characters Mickey Marley, immortalised in a Barnbrack song, was being held today.

Mr Marley, who was made famous in Barnbrack’s hit single Mickey Marley’s Roundabout, died last Thursday. He was in his mid 80s.

Requiem Mass was celebrated at St Peter’s Cathedral this morning followed by cremation at Roselawn.

Mr Marley, who lived in the Grosvenor Road area, and his horse-drawn roundabout was a familiar sight on the city’s streets for decades.

After leaving school at a young age, he saved up to buy his first pony and his roundabout was a huge success, first in the Falls area, then Belfast city centre and beyond.

After Sean McRobin, of local band Barnbrack, penned a song about him he became a local celebrity.

He became so well known that during a trip to Stormont in the 1970s, Prime Minister James Callaghan got his driver to stop so he could have a word with him.