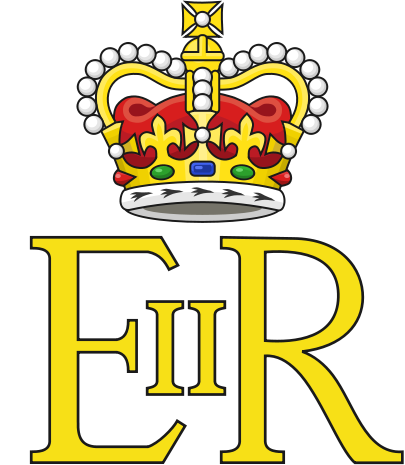 Princess Elizabeth has formally proclaimed herself Queen and Head of the Commonwealth and Defender of the Faith.

Lords of the Council – numbering 150 – representatives from the Commonwealth, officials from the City of London – including the Lord Mayor – and other dignitaries witnessed the accession of the deceased king’s eldest daughter this morning.

The new monarch read an official Proclamation – also ordered to be published – declaring her reign as Her Majesty Queen Elizabeth the Second.

“By the sudden death of my dear father I am called to assume the duties and responsibilities of sovereignty.”

“My heart is too full for me to say more to you today than I shall always work, as my father did throughout his reign, to advance the happiness and prosperity of my peoples, spread as they are all the world over.”

Her husband, Prince Philip of Greece, the Duke of Edinburgh, was also present at the 20 minute meeting at St James’s Palace.

The couple returned to the UK yesterday after cutting short a tour of the Commonwealth – beginning in Kenya a week ago – because of King George VI’s sudden death on 6 February.

After the Accession Declaration, at 1000 GMT, the new Queen held her first Privy Council meeting and her Proclamation was signed by the Lord Chancellor, the prime minister, and many other privy counsellors along with representatives of the Commonwealth and the City and the Lord Mayor of London.

During the ceremonies the 25-year-old Queen also took an oath to assure the security of the Church of Scotland and approved several other Orders in Council.

Other dignitaries formally announced the new sovereign across the UK and Commonwealth.

In a statement this evening the Home Secretary, Sir David Fyfe, asked the nation for two minutes’ silence on 15 February when the late King will be buried at St George’s Chapel, Windsor.

Queen Elizabeth II was proclaimed sovereign throughout her realms after her father, King George VI, died in the night between 5 and 6 February 1952, while Elizabeth was in Kenya. Proclamations were made in different realms on 6, 7, 8, and 11 February (depending on geographic location and time zone). The line of succession was identical in all the Commonwealth realms, but the royal title as proclaimed was not the same in all of them: 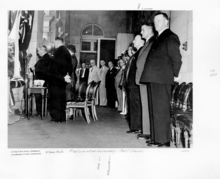 The Governor-General of Australia, Sir William McKell, issued the proclamation of Elizabeth’s accession as Queen of Australia. On Friday, 8 February It was read from the steps of Parliament House as follows:

WHEREAS it hath pleased Almighty God to call to His Mercy Our Late Sovereign Lord, King George the Sixth, of blessed and glorious memory, by whose decease the Crown is solely and rightfully come to the High and Mighty Princess Elizabeth Alexandra Mary: We, therefore, Sir William John McKell, The Governor-General and Commander-in-Chief in and over the Commonwealth of Australia and members of the Federal Executive Council do now hereby, with one voice and consent of tongue and heart, publish and proclaim that the High and Mighty Princess Elizabeth Alexandra Mary is now, by the death of our late Sovereign of happy memory, become Queen Elizabeth the Second, by the Grace of God, Queen of this realm and of all her other Realms and Territories, Head of the Commonwealth, Defender of the Faith, Supreme Liege Lady in and over the Commonwealth of Australia, to whom her lieges do acknowledge all faith and constant obedience, with hearty and humble affection: Beseeching God, by whom Kings and Queens do reign, to bless the Royal Princess Elizabeth the Second with long and happy years to reign over us.

Given at Canberra this seventh day of February in the Year of our Lord One thousand nine hundred and fifty two, and in the first year of Her Majesty’ s reign. God Save the Queen