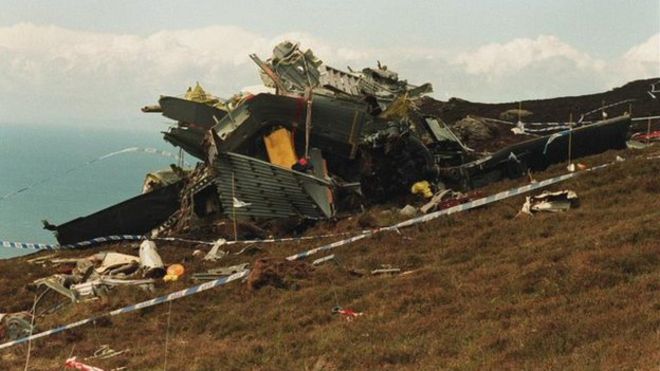 The 1994 Scotland RAF Chinook crash occurred on 2 June 1994 at about 18:00 hours when a Royal Air Force (RAF) Chinookhelicopter (serial number ZD576, callsign F4J40) crashed on the Mull of Kintyre, Scotland, killing all twenty-five passengers and four crew on board. Among the passengers were almost all the United Kingdom’s senior Northern Irelandintelligence experts. It was the RAF’s worst peacetime disaster.

An RAF board of inquiry in 1995 ruled that it was impossible to establish the exact cause of the crash. This ruling was subsequently overturned by two senior reviewing officers who said the pilots were guilty of gross negligence for flying too fast and too low in thick fog. This finding proved to be controversial, especially in light of irregularities and technical issues surrounding the then-new Chinook HC.2 variant which were…