The Blues and Royals (Royal Horse Guards and 1st Dragoons) (RHG/D) is a cavalry regiment of the British Army, part of the Household Cavalry. The Colonel-in-Chief is Queen Elizabeth II and the Colonel of the Regiment is Anne, Princess Royal. It is the second-most senior regiment in the British Army.

The Band of the Blues & Royals – Marching and Public concert in Solothurn, Switzerland

The Blues and Royals is one of two regiments of the Household Division that can trace its lineage back to the New Model Army, the other being the Coldstream Guards.

Troopers of the Blues and Royals at the Trooping the Colour parade, London, 2007

Since then, the new regiment has served in Northern Ireland, Germany, and Cyprus. During the Falklands War of 1982, the regiment provided the two armoured reconnaissance troops. The regiment also had a squadron on operational duty with the United Nations in Bosnia in 1994–95. Most recently, the regiment saw action in the Iraq War and the War in Afghanistan.

Both Prince William, Duke of Cambridge, and Prince Harry joined the regiment as cornets in 2006. 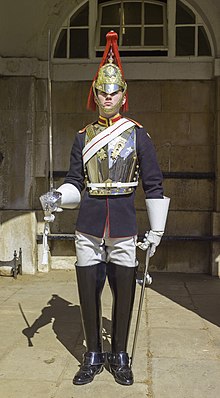 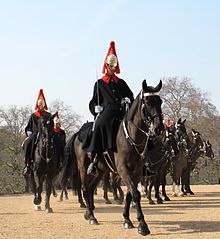 Changing of the guard at Horse Guards

Instead of being known as the Royal Horse Guards and 1st Dragoons, the regiment is known as the Blues and Royals and is therefore the only regiment in the British Army to be officially known by their nickname as opposed to their full name.

Newly commissioned officers in the Blues and Royals are named Cornets, rather than Second Lieutenants as is the standard in the rest of the British Army. The rank of sergeant does not exist in the Household Cavalry. The equivalent is Corporal of Horse, which also applies to any other ranks with the word sergeant in it, such as Regimental Sergeant Major, which is replaced by Regimental Corporal Major. King Edward VII also declared the rank of Private should be replaced by the rank of Trooper in the cavalry.

This set the precedent for the usage of Trooper instead of Private in other cavalry units, such as those of the modern Royal Armoured Corps.

The Blues and Royals is the only regiment in the British Army that allows troopers and non-commissioned officers, when not wearing headdress, to salute an officer. The custom started after the Battle of Warburg in 1760 by the Marquess of Granby, who commanded both the Royal Horse Guards and the Royal Dragoons, which were separate units at the time. During the battle, the Marquess had driven the French forces from the field, losing both his hat and his wig during the charge. When reporting to his commander, Prince Ferdinand of Brunswick, in the heat of the moment he is said to have saluted without wearing his headdress, having lost it earlier. When the Marquess of Granby became the Colonel of the Blues, the regiment adopted this tradition.

Further, the Blues and Royals and the Life Guards are the only two units in the British forces that are not required to remove their headdress indoors, unless they are inside a church.

When the Household Cavalry mounts an escort to the Sovereign on State occasions, a ceremonial axe with a spike is carried by a Farrier Corporal of Horse. The historical reason behind this is that when a horse was wounded or injured so seriously that it could not be treated, its suffering was ended by killing it with the spike. The axe is also a reminder of the days when the Sovereign’s escorts accompanied royal coaches and when English roads were very bad. Horses often fell, becoming entangled in their harnesses and had to be freed with the cut of an axe. It is also said that, in those times, if a horse had to be put to death, its rider had to bring back a hoof, cut off with the axe, to prove to the Quartermaster that the animal was in fact dead, thereby preventing fraudulent replacement. Today, the axe remains as a symbol of the Farrier’s duties.

On ceremonial occasions, the Blues and Royals wear a blue tunic (inherited from the Royal Horse Guards, also known as “the Blues”), a metal cuirass, and a matching helmet with a red plume worn unbound, and against popular belief the regiments farriers wear a red plume like the rest of the regiment but do not wear the metal cuirass. In addition, the Blues and Royals wear their chin strap under their chin, as opposed to the Life Guards, who wear it below their lower lip. On service dress, the Blues and Royals wear a blue lanyard on the left shoulder, as well as a Sam Browne belt containing a whistle. In most dress orders, the Waterloo Eagle is worn on the left arm as part of dress traditions.

Prince Harry wore the uniform at the wedding of his brother, Prince William, to Catherine Middleton.

The battle honours are: