Tomorrow is the anniversary of this brutal attack by the UVF.
They killed 33 civilians and a full-term unborn child, and injured almost 300.

The views and opinions expressed in this page and  documentaries are soley intended to educate and provide background information to those interested in the Troubles of Northern Ireland. They in no way reflect my own opinions and I take no responsibility for any inaccuracies or factual errors

The Dublin and Monaghan 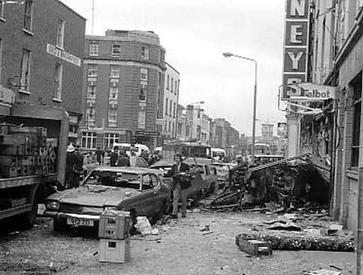 The Dublin and Monaghan bombings of 17 May 1974 were a series of co-ordinated no-warning car bombings in Dublin and Monaghan, Republic of Ireland. Three exploded in Dublin during rush hour and a fourth exploded in Monaghan almost ninety minutes later. They killed 33 civilians and a full-term unborn child, and injured almost 300. The bombings were the deadliest attack of the conflict known as the Troubles, and the deadliest terrorist attack in the Republic’s history.[2] Most of the victims were young women, although the ages of the…