The Irish Republican Army (IRA) exploded 23 bombs at locations all over Northern Ireland.

[Public Records 1972 – Released 1 January 2003: Current Situation Report No 118 by A.W.Stephens, then Head of Defence Secretariat 10 at the Ministry of Defence, providing details of security incidents during the previous 24 hours in Northern Ireland.]

The Royal Ulster Constabulary (RUC) carried out a raid on the Ulster Defence Association (UDA) headquarters in Belfast.

The raid uncovered ammunition and gun parts. Four leading members of the UDA were arrested.

[At this time the UDA was not a ‘proscribed’ organisation. It was only declared illegal on 10 August 1992.] 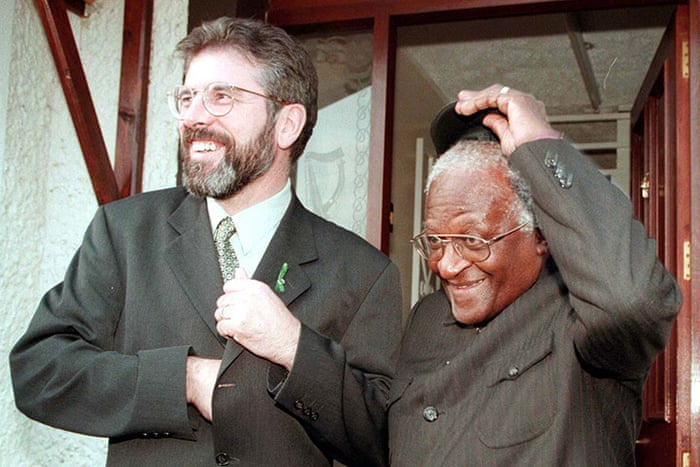 Bishop Desmond Tutu, from South Africa, attended an Anglican conference in Newcastle, County Down. Tutu said that Sinn Féin (SF) should be invited to attend the forthcoming talks on the future of Northern Ireland.

A British Army (BA) recruiting sergeant died after being shot by the Irish National Liberation Army (INLA) in Derby, England.

[This was the first killing by the INLA in Britain since March 1979.]

Teresa Clinton (34), a Catholic Civilian, was shot dead by the Ulster Freedom Fighters (UFF), a cover name (pseudonym) used by the Ulster Defence Association (UDA), during a gun attack on her home, off Ormeau Road, Belfast.

Her husband had been a former Sinn Féin (SF) election candidate.

The UFF carried out another gun attack and wounded of two Catholic civilians.

The Northern Ireland Office (NIO) offered to clarify, for the benefit of SF, specific points related to the Downing Street Declaration (DSD).

The Royal Ulster Constabulary (RUC) discovered 40 weapons and hundreds of rounds of ammunition which were believed to belong to the Ulster Volunteer Force (UVF). The cache was found in Holywood, County Down.

[Three men were arrested following the discovery. A second cache of arms was later found in the town.]

There was an arson attack on St Peter’s Catholic church in Stoneyford, County Antrim. The chapel was badly damaged by the fire.

A man (24) was seriously injured in what was believed to be a Loyalist ‘punishment’ shooting that took place in the Ballysally estate in Coleraine, County Derry.

The Irish Republican Army (IRA) was believed to be responsible for a ‘punishment’ beating attack on a man in Derry. The man subsequently went into hiding.

Patrick Mayhew, then Secretary of State for Northern Ireland, referred the case of Patrick Kane to the Court of Appeal. Kane had been convicted of, and was serving a life sentence for, the murder of corporals Derek Wood and David Howes on 19 March 1988.

In the Republic of Ireland the Irish authorities released nine Irish Republican Army (IRA) prisoners from Portlaoise Prison. On their release the prisoners pledged their “total support” for the leadership of Sinn Féin (SF).

[The releases were criticised by Unionists and by the Garda Representative Association.]

Liz O’Donnell, then Irish Minister of State for Foreign Affairs, acknowledged that the Hillsborough Declaration would not be the basis for resolving the decommissioning impasse.

There was a bomb explosion at a Post Office delivery depot in north London at 11.28pm (2328BST).

There had been no warning of the bomb but no one was injured in the explosion which caused “minor” damage to the building at The Hyde in Hendon. The “real” Irish Republican Army (rIRA) was thought to have been responsible for the attack.

Killed by: not known (nk)
Died two days after being shot while driving his car, at the junction of Albertbridge Road and Woodstock Road, Belfast.