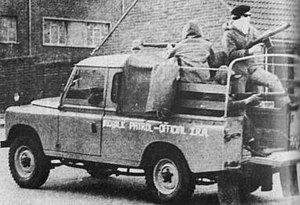 Members of the Official Irish Republican Army (OIRA) engaged in a gun battle with members of the Provisional IRA (PIRA). One man was killed. The feud between the two wings of the IRA had been developing ever since the Republic movement split on 11 January 1970.

A referendum was held on whether or not the people of Northern Ireland wanted to remain part of the United Kingdom (UK). This referendum became known as the ‘Border Poll’. However, Nationalists boycotted the referendum and only 57 per cent of the electorate took part in the poll. It was not surprising therefore that, of those who took part, 98 per cent were in favour of maintaining the Union with Britain.

A British soldier guarding a polling station in the lower Falls area of Belfast was shot dead by the Irish Republican Army (IRA).

A Catholic civilian was found shot dead in an abandoned car in the Oldpark area of Belfast. He had been killed by Loyalist paramilitaries.

The IRA exploded two car bombs in London and injured over 200 people. (One person in the vicinity died a sudden death due to a heart problem; listed in appendix to Sutton.)

One of the bombs had been planted at the ‘Old Bailey’ court in London. Two other car bombs were diffused.

[Nine people were found guilty of the bombings on 14th November 1973. Among those found guilty was Gerry Kelly. Kelly was later to become a leading member of Sinn Féin and played a role in the negotiations that led to the Goody Friday Agreement on 10th April 1998  ]

There were bombs in Belfast and Derry. Loyalist paramilitaries carried out a raid on an Ulster Defence Regiment (UDR) guard at a polling station in east Belfast and stole 8 British Army issue self-loading rifles (SLRs) and ammunition. The members of the guard claimed that they were ‘overpowered’ by the Loyalists.

Eight members of the SAS were each fined £100 in a Dublin court for carrying guns without a certificate. The men had been found in the Republic of Ireland and were arrested.

Thomas Trainor (29), a member of the Irish National Liberation Army (INLA), and Denis Kelly (31), a Catholic civilian, were shot dead by the Red Hand Commando (RHC) in Portadown, County Armagh.

[The RHC was a Loyalist paramilitary group with links to the Ulster Volunteer Force (UVF).]

The body of Lorraine McCausland’s (23), a Protestant civilian, was found in a stream near a Tynedale loyalist club in north Belfast.

McCausland had been drinking in the club the night before her half-naked body was discovered. She had been beaten to death.

[The book ‘Lost Lives’ (2004; p1064) included a claim that “Reliable loyalist sources said the men who killed her belonged to the UDA”. However, currently (2007) the motivation for the killing remains unclear.]

A car believed to belong to those killed in Gibraltar was found in Marbella and was discovered to contain 140 pounds of high explosives.

The Irish Republican Army (IRA) killed two soldiers and injured six others in a landmine explosion on the Buncrana Road near Derry. The Emergency Provision Act was renewed in the House of Commons.

Patrick Mayhew, then Secretary of State for Northern Ireland, welcomed the speech made by Dick Spring, then Tánaiste (deputy Irish Prime Minister and Minister for Foreign Affairs), on 5 March 1993. Mayhew said that Spring was someone he could “do business with”.

Michael Howard, then British Home Secretary, lifted exclusion orders against 16 people. The orders were made under the Prevention of Terrorism Act (PTA). The Northern Ireland Office (NIO) announced that security barriers in Belfast city centre would be removed.

The Loyalist Volunteer Force (LVF) planted firebombs in the offices of the Northern Ireland Tourist Board (NITB) in Banbridge and Newcastle, which caused serious damage.

[The attacks were believed to be a response to the marketing of the whole of Ireland as a tourist destination by the Northern Ireland Tourist Board in conjunction with Bord Fáilte (the tourist board in the Republic of Ireland). Many Loyalists are opposed to cross-border co-operation of any kind.]

There were demonstrations in support of Roisín McAliskey, then being held in prison awaiting a decision about extradition, in Dublin, London, New York, Washington, and a number of other cities.

Loyalist paramilitaries carried out a bomb attack on the home of a Catholic man and his Protestant partner in Larne, County Antrim. The man claimed that attack was sectarian and blamed local members of the Ulster Defence Association (UDA); he said that he was involved in a ‘run-in’ (a fracas) with a leading Loyalist figure the previous week.

The Royal Ulster Constabulary (RUC) said that no motive had been established for the attack.

The Loyalist Volunteer Force (LVF) issued threats against Protestant churchmen, business leaders and politicians whom it claimed were “colluding” with the peace process. In a ‘policy document’ the LVF expressed support for Ian Paisley, then leader of the Democratic Unionist Party (DUP), saying “Paisley has got it absolutely right”.

Gerry Adams, then President of Sinn Féin (SF), conceded that there was no prospect of an imminent united Ireland. An article written by Adams appeared in the Ireland on Sunday (a Republic of Ireland newspaper) set out the minimum demands that would have to be met before SF would sign any agreement.

An opinion  poll published in the same paper reported that 71 per cent of people in the Republic of Ireland wanted to see a united Ireland.

David Trimble, then First Minister Designate, reacted angrily to Marjorie (Mo) Mowlam’s, then Secretary of State for Northern Ireland, announcement extending the deadline for the creation of the Northern Ireland Executive until Easter week (2 April 1999).

Bertie Ahern, then Taoiseach (Irish Prime Minister), met with Gerry Adams, then President of SF, in Government Buildings in Dublin.

Loyalists carried out a ‘pipe-bomb’ attack on the home of a family in Portadown, County Armagh

. It was disclosed that the Royal Ulster Constabulary (RUC) had advised Gerry Adams of a threat to his life from dissident Republicans.

On International Women’s Day, the President, Mrs McAleese, said “skewed, twisted and unhealthy” thinking and teaching about the role of women over generations had left an obstacle course of impediments to their equal treatment.

A special debate in Parliament Buildings, Stormont, was among many events to mark the day on both sides of the Border.

Tony Blair, then British Prime Minister, and Bertie Ahern, then Taoiseach (Irish Prime Minister), held new talks in Belfast with the political parties. It appeared that the two governments were resigned to being unable to achieve any breakthrough deal before the British general election.

However the two men hoped for an interim agreement to keep the peace process alive.

The Irish Republican Army (IRA) stated that it was willing to meet with John de Chastelain (Gen.), then head of the Independent International Commission on Decommissioning (IICD).

[This was to be the first meeting since June 2000. Most Unionists were not impressed by the IRA offer of talks and demanded action on disarmament.]

Killed by: non-specific Republican group (REP)
Died one month after being injured in an explosion at temporary council offices in school hall, Keady, County Armagh. Explosion occurred on 6 February 1972.

Killed by: Irish Republican Army (IRA)
Off duty. Shot at his workplace, a petrol station, Airport Road, near Moira, County Down.