A man who stood in front of a column of tanks on June 5, 1989, the morning after the Chinese military had suppressed the Tiananmen Square protests of 1989 by force, became known as the Tank Man or Unknown Protester. As the lead tank maneuvered to pass by the man, he repeatedly shifted his position in order to obstruct the tank’s attempted path around him. The incident was filmed and seen worldwide.

Currently, there is no reliable information about the identity or fate of the tank man.

The incident took place near Tiananmen on Chang’an Avenue, which runs east-west along the north end of Tiananmen Square in Beijing, China, on June 5, 1989, one day after the Chinese government’s violent crackdown on the Tiananmen protests.[4] The man stood in the middle of the wide avenue, directly in the path of a column of approaching Type 59 tanks. He wore a white shirt and black trousers, and he held two shopping bags, one in each hand.[5] As the tanks came to a stop, the man gestured towards the tanks with his bags. In response, the lead tank attempted to drive around the man, but the man repeatedly stepped into the path of the tank in a show of nonviolent action.[6] After repeatedly attempting to go around rather than crush the man, the lead tank stopped its engines, and the armored vehicles behind it seemed to follow suit. There was a short pause with the man and the tanks having reached a quiet, still impasse.

Having successfully brought the column to a halt, the man climbed onto the hull of the buttoned-up lead tank and, after briefly stopping at the driver’s hatch, appeared in video footage of the incident to call into various ports in the tank’s turret. He then climbed atop the turret and seemed to have a short conversation with a crew member at the gunner’s hatch. After ending the conversation, the man descended from the tank. The tank commander briefly emerged from his hatch, and the tanks restarted their engines, ready to continue on. At that point, the man, who was still standing within a meter or two from the side of the lead tank, leapt in front of the vehicle once again and quickly re-established the man–tank standoff.

Video footage shows two figures in blue pulling the man away and disappearing with him into a nearby crowd; the tanks continued on their way.[6] Eyewitnesses are unsure who pulled him aside. Charlie Cole, who was there for Newsweek, said it was the Chinese government PSB (Public Security Bureau),[7] while Jan Wong, who was there for The Globe and Mail, thought that the men who pulled him away were concerned bystanders. In April 1998, Time included the “Unknown Rebel” in a feature titled Time 100: The Most Important People of the Century.[8]

Little is publicly known of the man’s identity or that of the commander of the lead tank. Shortly after the incident, the British tabloid the Sunday Express named him as Wang Weilin (王维林), a 19-year-old student[9] who was later charged with “political hooliganism” and “attempting to subvert members of the People’s Liberation Army.”[10] However, this claim has been rejected by internal Communist Party of China documents, which reported that they could not find the man, according to the Hong Kong-based Information Center for Human Rights.[11] One party member was quoted as saying, “We can’t find him. We got his name from journalists. We have checked through computers but can’t find him among the dead or among those in prison.”[11] Numerous theories have sprung up as to the man’s identity and current whereabouts.[12]

There are several conflicting stories about what happened to him after the demonstration. In a speech to the President’s Club in 1999, Bruce Herschensohn, former deputy special assistant to President Richard Nixon, reported that he was executed 14 days later; other sources say he was executed by firing squad a few months after the Tiananmen Square protests.[6] In Red China Blues: My Long March from Mao to Now, Jan Wong writes that she believes from her interactions with the government press that they have “no idea who he was either” and that he’s still alive somewhere on the mainland.

The government of the People’s Republic of China has made few statements about the incident or the people involved. In a 1990 interview with Barbara Walters, then-CPC General Secretary Jiang Zemin was asked what became of the man. Jiang first stated (through an interpreter), “I can’t confirm whether this young man you mentioned was arrested or not,” and then replied in English, “I think…never killed” [sic].[13] At the time, the party’s propaganda apparatus referred to the incident as showing the “humanity” of the country’s military.[14]

In a 2000 interview with Mike Wallace, Jiang Zemin said, “He was never arrested.” He then stated, “I don’t know where he is now.” He also emphasized that the tank stopped and did not run the young man down.[15]

The intersection in 2014, viewed from a different angle

Internationally, the image of the lone man in front of the tank has come to symbolize the events at Tiananmen Square in 1989[11][16] and is widely considered one of the most iconic images of the 20th century.[1][2][3]

However, a PBS interview of six experts noted that the memory of the Tiananmen Square protests appears to have faded in China, especially among younger Chinese people, due to government censorship.[17] Images of the protest on the Internet have been censored in China.[11] When undergraduate students at Beijing University, which was at the center of the incident, were shown copies of the iconic photograph 16 years afterwards, they “were genuinely mystified.”[18] One of the students said that the image was “artwork.” It is noted in the documentary Frontline: The Tank Man, that he whispered to the student next to him “89”–which led the interviewer to surmise that the student may have concealed his knowledge of the event.

It has been suggested that the “Unknown Rebel,” if still alive, never made himself known as he is unaware of his international recognition due to Chinese media suppression of events relating to government protest.[11]

At and after the events in the square, the PSB treated members of the international press roughly, confiscating and destroying all the film they could find, and forced the signing of confessions to offences such as photography during martial law, punishable by long imprisonment.[19]

Five photographers (one of whom did not share his material for 20 years) managed to capture the event on film that was not later confiscated by the PSB.[20] On June 4, 2009, the fifth photographer released an image of the scene taken from ground level.[16]

The widest coverage of the event, and one of the best-known photographs of the event, appearing in both Time and Life magazines, was documented by Stuart Franklin. He was on the same balcony as Charlie Cole, and his roll of film was smuggled out of the country by a French student, concealed in a box of tea.[20]

The most-used photograph of the event was taken by Jeff Widener of the Associated Press, from a sixth-floor balcony of the Beijing Hotel, about half a mile (800 meters) away from the scene. Widener was injured and suffering from flu. The image was taken using a Nikon FE2 camera through a Nikkor 400mm 5.6 ED IF lens and TC-301 teleconverter.[21] With Widener running out of film, a friend hastily obtained a roll of Fuji 100 ASA color negative film, allowing him to make the shot.[22] Though he was concerned that his shots were no good, his image was syndicated to many newspapers around the world[20] and was said to have appeared on the front page of all European papers.[22] 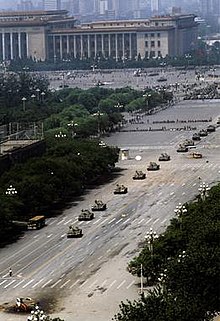 Charlie Cole, working for Newsweek and on the same balcony as Stuart Franklin, hid his roll of film containing Tank Man in a Beijing Hotel toilet, sacrificing an unused roll of film and undeveloped images of wounded protesters after the PSB raided his room, destroyed the two aforementioned rolls of film and forced him to sign a confession to photography during martial law, an imprisonable offence. Cole was able to retrieve the roll and have it sent to Newsweek.[20]

Franklin won a World Press Award for a similar photo.[23] It was featured in Life‍‍ ’​‍s “100 Photographs That Changed the World” in 2003.

On June 4, 2009, in connection with the 20th anniversary of the protests, Associated Press reporter Terril Jones revealed a photo he had taken showing the Tank Man from ground level, a different angle from all of the other known photos of the Tank Man. Jones wrote that he was not aware of what he had captured until a month later when printing his photos.[24]

Arthur Tsang Hin Wah of Reuters took several shots from room 1111 of the Beijing Hotel,[25] but only the shot of Tank Man climbing the tank was chosen.[20] It was not until several hours later that the photo of the man standing in front of the tank was finally chosen. When the staff noticed Widener’s work, they re-checked Wah’s negative to see if it was of the same moment as Widener’s. On March 20, 2013, in an interview by the Hong Kong Press Photographers Association (HKPPA), Wah told the story and added further detail. He told HKPPA that on the night of June 3, 1989, he was beaten by students while taking photos and was bleeding. A “foreign” photographer accompanying him suddenly said, “I am not gonna die for your country,” and left. Wah returned to the hotel. When he decided to go out again, the public security stopped him, so he stayed in his room, stood next to the window and eventually witnessed the Tank Man and took several shots of the event.[25]

In addition to the photography, video footage of the scene was recorded and transmitted across the world. Australian Broadcasting Corporation (ABC) cameraman Willie Phua and CNN cameraman Jonathon Schaer appear to be the only two television cameramen who captured the scene.[26][27] ABC correspondents Max Uechtritz and Peter Cave were the journalists reporting from the balcony.[28]

After seeing Chinese tanks crush vehicles and people on June 3, many journalists and photographers believed the protests had already reached their peak, causing many to leave the area before the “tank man” incident occurred.[19][29]

Franklin studied drawing under Leonard McComb in Oxford and Whitechapel, London, and from 1976–1979 photography at West Surrey College of Art and Design, where he graduated with a BA. Moreover, between 1995 and 1997, he studied geography at the University of Oxford, first receiving a BA and the Gibbs Prize for geography. He received a doctorate in Geography from the University of Oxford in 2000.[1]

From 1980 until 1985, Franklin worked with Agence Presse Sygma in Paris. During that time he photographed the civil war in Lebanon, unemployed people in Britain, famine in Sudan and the Heysel Stadium disaster.

Joining Magnum Photos in 1985,[2] he became a full member in 1989. In the same year, Franklin photographed the uprising in Tiananmen Square and shot one of the Tank Man photographs, first published in Time Magazine, as well as widely documenting the uprising in Beijing [3][4] earning him a World Press Photo Award.

In 1989 Franklin traveled with Greenpeace to Antarctica. He worked on about twenty stories for National Geographic between 1991 and 2009, subjects including Inca conqueror Francisco Pizarro and the hydro-struggle in Quebec and places such as Buenos Aires and Malaysia.[1] In addition, he worked on book and cultural projects. In October 2008, his book Footprint: Our Landscape in Flux was published by Thames & Hudson. An ominous photographic document of Europe’s changing landscape, it highlights Franklin’s deep ecological concern.

During 2009 Franklin curated an exhibition on Gaza – “Point of No Return” for the Noorderlicht Photo Festival. Since 2009 Franklin has focused on a long term landscape project in Norway published as “Narcissus” in 2013. Recently Franklin has worked on documentary projects on doctors working in Syria, and immigration in Calais. He leads a programme in documentary photography at Høgskulen i Volda, Norway.