A member of the Irish Republican Army (IRA) was killed in a premature bomb explosion in Santry, Dublin.

[Public Records 1975 – Released 1 January 2006: Note of a meeting between the Permanent Under-Secretary (PUS), on behalf of the British government, and Mr Stanley Worrall and Dr Jack Weir. The meeting took place at a house known as Laneside, in Hollywood, County Down. Worral and Weir had been part of a group of Protestant clergymen who had meet with senior members of the Irish Republican Army (IRA) at Feakle, County Clare, on 10 December 1974].

A Loyalist paramilitary group called the Loyalist Prisoners Action Force (LPAF) shot dead William Burns (45) a prisoner officer in Belfast. [It is believed that the LPAF was a cover name used by the Ulster Volunteer Force (UVF).]

Fergal Caraher, a member of Sinn Féin (SF), was shot and killed and his brother wounded when British Army troops opened fire on their car at a check point at Cullyhanna, County Armagh.

The Ulster Volunteer Force (UVF) said that it did not feel threatened by the Downing Street Declaration and would not support another “publicity stunt” by Ian Paisley, then leader of the Democratic Unionist Party (DUP). 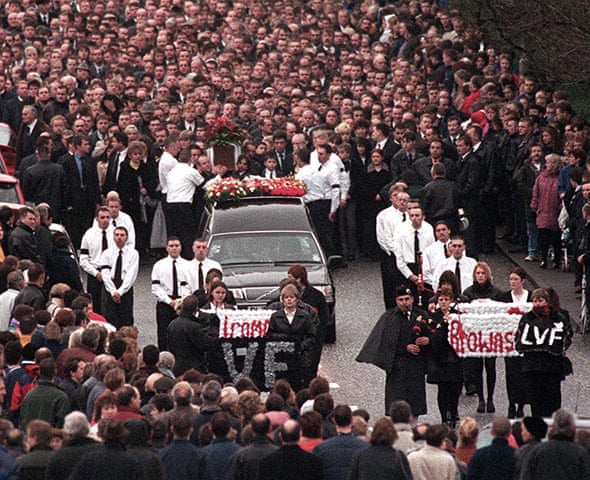 There was a heavy Royal Ulster Constabulary (RUC) presence in Portadown, County Armagh, during the funeral of Billy Wright, who had been leader of the Loyalist Volunteer Force (LVF). Leaflets issued by the LVF requested shopkeepers to close their premises as a mark of respect.
Séamus Dillon, who had been killed by the Loyalist Volunteer Force (LVF), was buried in Coalisland, County Tyrone. His family called for no retaliation for his murder.

Killed by: not known (nk)
Shot during attempt to steal his shotgun, while wildfowling on the shore of Belfast Lough, by Whitehouse Park, Newtownabbey, County Antrim.