Like many Belfast and Northern Ireland people Alex Higgins was a hero of mine and as a teenager I remember watching the Hurricane win the world championship in 1982 and becoming the pride of Ulster and a national treasure.

I was lucky to meet him on a few occasions, my dad and his brothers use to hang about with him in the Jampot in Sandy Row and when my grandmother died he came to the wake and drank us all under the table.

Sadly his antics away from the table made uncomfortable viewing and I watch with a heavy heart as he stumbled from one calamity to another and eventually he  faded away from the game and spent his later life drinking and gambling and was a common sight in The Crown Bar and betting shops in Belfast City Centre.

Cancer finally took him off this mortal coil and the Hurricane  run out of steam. But he was and remains The Pride  of Belfast

Alexander Gordon “Alex” Higgins (18 March 1949 – 24 July 2010)[6] was a Northern Irish professional snooker player, who is remembered as one of the most iconic figures in the game. Nicknamed Hurricane Higgins because of his fast play,[7] he was World Champion in 1972 and 1982, and runner-up in 1976 and 1980. He won the UK Championship in 1983 and the Masters in 1978 and 1981, making him one of ten players to have completed snooker’s Triple Crown. He was also World Doubles champion with Jimmy White in 1984, and won the World Cup three times with the All Ireland team.

Higgins came to be known as the “People’s Champion” because of his popularity,[8] and is often credited with having brought the game of snooker to a wider audience, contributing to its peak in popularity in the 1980s.[9] He had a reputation as an unpredictable and difficult character.[10] He was a heavy smoker,[11] struggled with drinking and gambling,[9][12] and admitted to using cocaine and marijuana.[7] First diagnosed with throat cancer in 1998,[13] Higgins died of multiple causes in his Belfast home on 24 July 2010. 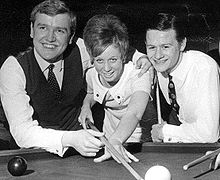 Higgins (right) with David Taylor at an exhibition at Queen’s University Belfast, 1968

Alex Higgins was born in Belfast[14] and had three sisters.[13] He started playing snooker at the age of 11,[15] often in the Jampot club in his native Sandy Row area of south Belfast and later in the YMCA in the nearby city centre. At age 14 and weighing seven and a half stone (47.6 kg), he left for England and a career as a jockey.[16] However, he never made the grade because, in his youth, he drank a lot of Guinness and ate a lot of chocolate, making him too heavy to ride competitively.[17] He returned to Belfast and by 1965, aged 16, he had compiled his first maximum break.[15] In 1968 he won the All-Ireland and Northern Ireland Amateur Snooker Championships.[14]

Higgins turned professional at the age of 22, winning the World Championship at his first attempt in 1972, against John Spencer winning 37–32.[18] Higgins was then the youngest ever winner of the title, a record retained until Stephen Hendry‘s 1990 victory at the age of 21.[19] In April 1976, Higgins reached the final again and faced Ray Reardon. Higgins led 11–9, but Reardon made four centuries and seven breaks over 60 to pull away and win the title for the fifth time with the score of 27–16. Higgins was also the runner-up to Cliff Thorburn in 1980, losing 18–16, after being 9–5 up. Higgins won the world title for a second time in 1982 after beating Reardon 18–15 (with a 135 total clearance in the final frame); it was an emotional as well as professional victory for him. Higgins would have been ranked No. 1 in the world rankings for the 1982/83 season had he not forfeited ranking points following disciplinary action.[20][21]

Throughout his career, Higgins won 20 other titles, one of the most notable being the 1983 UK Championship. In the final he trailed Steve Davis 0–7 before producing a famous comeback to win 16–15.[22] He also won the Masters twice, in 1978 and in 1981, beating Cliff Thorburn and Terry Griffiths in the finals respectively.[23] Another notable victory was his final professional triumph in the 1989 Irish Masters at the age of 40 when he defeated a young Stephen Hendry.

After his retirement from the professional game, Higgins spent time playing for small sums of money in and around Northern Ireland. He made appearances in the 2005 and 2006 Irish Professional Championship, these comebacks ending in first-round defeats by Garry Hardiman and Joe Delaney respectively.

On 12 June 2007, it was reported that Higgins had assaulted a referee at a charity match in the north-east of England.[24] Higgins returned to competitive action in September 2007 at the Irish Professional Championship in Dublin but was whitewashed 0–5 by former British Open champion Fergal O’Brien in the first round at the Spawell Club, Templelogue.[25]

Higgins continued to play fairly regularly, and enjoyed “hustling” all comers for small-time stakes in clubs in Northern Ireland and beyond; in May 2009 he entered the Northern Ireland Amateur Championship, “to give it a crack”,[26] but failed to appear for his match.

On 8 April 2010, Higgins was part of the debut Snooker Legends Tour event in Sheffield, at the Crucible, checking himself out of hospital two days before the event, after having been admitted with pneumonia and breathing problems.[27] Appearing alongside other retired or close-to-retiring professionals, including John Parrott, Jimmy White, John Virgo and Cliff Thorburn, he faced Thorburn in his match, but lost 2–0.[28]

It is estimated that Higgins earned and spent £3–4 million in his career as a snooker player.[29][30]

Higgins’s speed around the table, his ability to pot balls at a rapid rate and flamboyant style earned him the nickname “Hurricane Higgins” and made him a very high-profile player. His highly unusual cueing technique sometimes included a body swerve and movement, as well as a stance that was noticeably higher than that of most professionals.

The unorthodox play of Higgins was encapsulated in his break of 69, made under unusual pressure, against Jimmy White in the penultimate frame of their World Professional Snooker Championship semi-final in 1982. Higgins was 0–59 down in that frame, but managed to compile an extremely challenging clearance during which he was scarcely in position until the colours. In particular, former world champion Dennis Taylor considers a three-quarter-ball pot on a blue into the green pocket especially memorable, not only for its extreme degree of difficulty but for enabling Higgins to continue the break and keep White off the table and unable to clinch victory at that moment. In potting the blue, Higgins screwed the cue-ball on to the side cushion to bring it back towards the black/pink area with extreme left-hand sidespin, a shot Taylor believes could be played 100 times without coming close to the position Higgins reached with cue-ball. He went a little too far for ideal position on his next red but the match-saving break was still alive.[31][citation needed]

Higgins drank alcohol and smoked during tournaments, as did many of his contemporaries. A volatile personality got him into frequent fights and arguments, both on and off the snooker table. One of the most serious of these clashes was when he head-butted a referee at the UK championship in 1986. This led to his being fined £12,000 and banned from five tournaments.[32] He was convicted of assault and criminal damage, and fined £250 by a court.[33] Another came at the 1990 World Championship; after losing his first-round match to Steve James, he punched tournament official Colin Randle in the abdomen, before the start of a press conference at which he announced his retirement. This, added to his having threatened to have fellow player and compatriot Dennis Taylor shot, led to a ban for the whole of the following season.[34]

At the time of his 1972 triumph at the World Championship, Higgins had no permanent home and by his own account had recently lived in a row of abandoned houses in Blackburn which were awaiting demolition. In one week he had moved into five different houses on the same street, moving down one every time his current dwelling was demolished.[35]

He had a long and enduring friendship with Oliver Reed and was a good friend of John Sykes, with whom he often played exhibition matches.[41]

While not normally noted for his philanthropy, in 1983 Higgins helped a young boy from the Manchester area, a fan of his who had been in a coma for two months. His parents were growing desperate and wrote to Higgins. He recorded his voice on a tape and sent it to the boy with his best wishes. He later visited the boy in hospital, unannounced, and promised that if the boy recovered they would play snooker together. True to his word, once the boy was out, the match was held.[42]

In 1996, Higgins was convicted of assaulting a 14-year-old boy,[30] while in 1997 then-girlfriend Holly Haise stabbed him three times during a domestic argument.[33] He published his autobiography, From the Eye of the Hurricane: My Story, in 2007.[43] Higgins appeared in the Sporting Stars edition of the British television quiz The Weakest Link on 25 July 2009.[44]

By 2009, Higgins lived alone in a caravan.[30] In spring 2010, he contracted pneumonia.[39] In April 2010 Higgins’s friends announced that they had set up a campaign to help raise the £20,000 he needed for teeth implants, to enable him to eat properly again and put on weight. Higgins had lost his teeth after intensive radiotherapy used to treat his throat cancer. It was reported that since losing them he had been living on liquid food, and had become increasingly depressed, even contemplating suicide.[47] He was too ill to have the implants fitted.[48] Despite his illness he continued to smoke cigarettes and drink heavily until the end of his life.[49]

At the end of his life, Higgins’ weight fell to 6 stone (38 kilograms).[30] He lived in sheltered housing on the Donegall Road, Belfast.[39] Despite having once been worth £4 million, he was bankrupt and survived on a £200-a-week disability allowance.[47] He was found dead in bed in his flat on 24 July 2010.[6][14][38] The cause of death was a combination of malnutrition, pneumonia, a bronchial condition and throat cancer.[50] His children survive him.[51]

Higgins’ funeral service was held in Belfast on 2 August 2010. He was cremated, and his ashes were interred in Carnmoney Cemetery in Newtownabbey, County Antrim.

Higgins was inducted into the Snooker Hall of Fame in 2011.

Alex Higgins was an inspiration to many subsequent professional snooker players, including Ken Doherty, Jimmy White and Ronnie O’Sullivan, who in an interview stated “Alex was an inspiration to players like Jimmy White and thousands of snooker players all over the country, including me. The way he played at his best is the way I believe the game should be played. It was on the edge, keeping the crowd entertained and glued to the action.”[52]

In Clive Everton‘s TV documentary The Story of Snooker (2002), Steve Davis described Higgins as the “one true genius that snooker has produced”,[53] despite the autobiography of a contemporary leading professional Willie Thorne characterising Higgins as “not a great player”.[54] Higgins arguably fulfilled his potential only intermittently during his career peak in the 1970s and ’80s; Everton puts this down to Davis and Ray Reardon generally being too consistent for him.[55]

Regardless, Higgins’ exciting style and explosive persona helped make snooker a growing television sport in the 1970s and 1980s. Higgins also made the first 16-red clearance (in a challenge match in 1976); it was a break of 146 (with the brown as the first “red”, and sixteen colours: 1 green, 5 pinks and 10 blacks).[56]