Two Catholic teenagers were shot dead by the Royal Ulster Constabulary (RUC) while ‘joy riding’ in a stolen car in Belfast.

There was a general election in the Republic of Ireland. As a result of the election there was a change of government. Fine Gael / Labour coalition government took over from Fianna Fáil which had been in power for 16 years.

Merlyn Rees, then Secretary of Sate for Northern Ireland, announced that those people convicted of causing terrorist offences would no longer be entitled to special category status. In other words they were to be treated as ordinary criminals.

[This was part of a process, which some commentators called ‘criminalisation’, which saw the British government move from trying to reach a settlement with the Irish Republican Army (IRA) to treating the conflict. On 14 September 1976 Kieran Nugent was the first prisoner to be sentenced under the new regime and he refused to wear prison clothes choosing instead to wrap a blanket around himself. So started the ‘Blanket Protest’.]

Bobby Sands, then leader of the Irish Republican Army (IRA) in the Maze Prison, refused food and so began a new hunger strike . The choice of the start date was significant because it marked the fifth anniversary of the ending of special category status (1 March 1976). The main aim of the new strike was to achieve the reintroduction of political status for Republican prisoners. Edward Daly, then Catholic Bishop of Derry, criticised the decision to begin another hunger strike.

[Sands was to lead the hunger strike but it was decided that Brendan McFarlane would take over Sands’ role as leader of the Irish Republican Army (IRA) in the Maze Prison. It later became clear that the IRA leadership outside the prison was not in favour of a new hunger strike following the outcome of the 1980 strike. The main impetus came from the prisoners themselves. The strike was to last until 3 October 1981 and was to see 10 Republican prisoners starve themselves to death in support of their protest. The strike led to a heightening of political tensions in the region. It was also to pave the way for the emergence of Sinn Féin (SF) as a major political force in Northern Ireland.]

The British Enkalon company announced that it would close its factory in Antrim with the loss of 850 jobs.

Lord Lowry, then Northern Ireland Lord Chief Justice, was attacked by the Irish Republican Army (IRA) as he paid a visit to the Queen’s University of Belfast. The IRA fired several shots at Lowry who was not injured but a lecturer at the university was wounded by the gunfire. 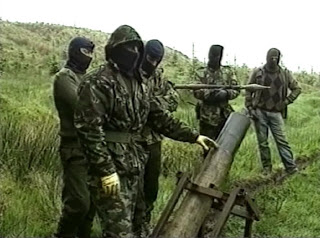 The Irish Republican Army (IRA) carried out a (horizontal) mortar attack on a Ulster Defence Regiment (UDR) mobile patrol on the Killylea Road, Armagh. One UDR soldier was killed and another, who was mortally wounded, died on 4 March 1991.

John Major, then British Prime Minister, completed a two-day visit to Washington, USA. [The visit was reported as an attempt to repair damage to Anglo-American relations following the decision to grant a visa to Gerry Adams, then President of Sinn Féin (SF).

A chocolate box containing a bomb was left on the windowsill of a Catholic house in Coalisland, County Tyrone. The owner of the house said the bomb was in a large Roses tin and was first spotted as she returned home by taxi after 10.00pm. The attack was carried out by Loyalist paramilitaries.

A pipe-bomb was found in Derriaghy, south of Belfast.

The new Northern Ireland Human Rights Commission (NIHRC) was established and replaced the Standing Advisory Commission on Human Rights (SACHR). The first Chief Commissioner of the NIHRC was Professor Brice Dickson of the University of Ulster. Unionists criticised the balance of the new Commission.

It was reported that almost 2,000 Catholics had applied to join the Police Service of Northern Ireland (PSNI) as part of the latest recruitment drive.

Advertisements were placed in a range of outlets during October 2001 as part of the second phase of recruitment to the police service.

[Almost 5,000 people applied, of whom 38 per cent were Catholic. Those who meet the basic requirements are then selected under the 50-50 Catholic-Protestant recruitment arrangements. The first pool of recruits who joined in 2001 complete their training on 5 April 2002. The new police badge and uniform will be introduced on the same date.]

The section of the Police (NI) Act 2000 which guarantees Catholics 50 per cent of new recruit places for the PSNI was challenged in the High Court in Belfast by a Protestant man (18) whose application was rejected. The section of legislation states: “In making appointments the Chief Constable shall appoint from a pool of qualified applicants an even number of whom one half shall be persons who are treated as Roman Catholic and one half shall be persons who are not so treated.”

Lawyers will argue that this section is incompatible with Article 9 of the European Convention of Human Rights and Article 14. Martin McGuinness (SF), then Education Minister, asked Unionist politicians to reconsider their views on academic selection at aged 11 years (the ’11-plus’ exam). McGuinness was addressing the northern conference of the Irish National Teachers’ Organisation (INTO) in Newcastle, County Down.

[Most Unionist politicians had expressed opposition to any changes to the current system of selection.]

James Sheehan, then Sinn Féin (SF) director of elections in Kerry North, was released without charge by Garda Síochána (the Irish police) in Killarney. He had been questioned as part of an investigation into an alleged vigilante-style abduction in the area that had taken place before Christmas.

Killed by: not known (nk)
Shot while walking along Linenhall Street West, Belfast