Jan Palach (11 August 1948 – 19 January 1969; Czech pronunciation: [jan ˈpalax]) was a Czech student of history and political economy at Charles University. He committed self-immolation as a political protest against the end of the Prague Spring resulting from the 1968 invasion of Czechoslovakia by the Warsaw Pact armies.

In August 1968, the Soviet Union invaded Czechoslovakia to crush the liberalising reforms of Alexander Dubček‘s government during what was known as the Prague Spring. Prague-born Palach decided to sacrifice himself in protest of the invasion and set himself on fire, in Wenceslas Square, on 16 January 1969. According to a letter he sent to several public figures, an entire clandestine resistance organization had been established with the purpose of practicing self-immolation until their demands were met; however, it seems that such a group never existed.[1] The demands declared in the letter were the abolition of censorship and a halt to the distribution of Zprávy, the official newspaper of the Soviet occupying forces. In addition, the letter called for the Czech and the Slovak peoples to go on a general strike in support of these demands.[2] An earlier draft of the letter that Palach wrote also called for the resignation of a number of pro-Soviet politicians,[3] but that demand did not make it into the final version, which included the remark that “our demands are not extreme, on the contrary”. Palach died from his burns several days after his act, at the hospital. On his deathbed, he was visited by a female acquaintance from his college and by a student leader, to whom he had addressed one of the copies of his letter. It was reported that he had pleaded for others not to do what he had done but instead to continue the struggle by other means, although it has been doubted whether he really said that.[4] 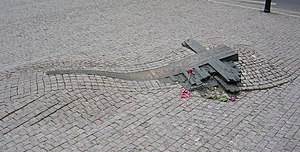 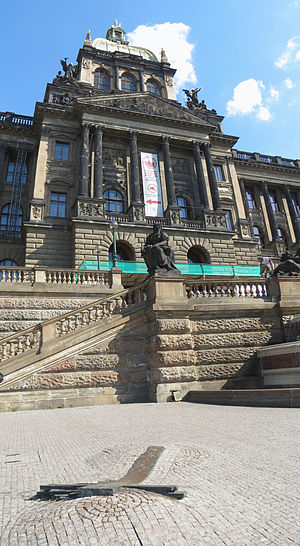 The memorial in front of the National Museum

The funeral of Palach turned into a major protest against the occupation, and a month later (on 25 February 1969) another student, Jan Zajíc, burned himself to death in the same place, followed in April of the same year by Evžen Plocek in Jihlava. 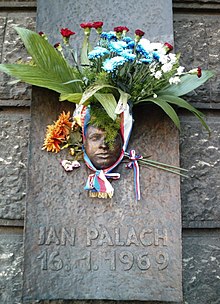 Palach was initially interred in Olšany Cemetery. As his gravesite was growing into a national shrine, the Czechoslovak secret police (StB) set out to destroy any memory of Palach’s deed and exhumed his remains on the night of 25 October 1973. His body was then cremated and sent to his mother in Palach’s native town of Všetaty while an anonymous old woman from a rest home was laid in the grave.[6] Palach’s mother was not allowed to deposit the urn in the local cemetery until 1974. On 25 October 1990 the urn was officially returned to its initial site in Prague.

On the 20th anniversary of Palach’s death, protests ostensibly in memory of Palach (but intended as criticism of the regime) escalated into what would be called “Palach Week”. The series of anticommunist demonstrations in Prague between 15 and 21 January 1989 were suppressed by the police, who beat demonstrators and used water cannons, often catching passers-by in the fray. Palach Week is considered one of the catalyst demonstrations which preceded the fall of communism in Czechoslovakia 10 months later.[citation needed]

After the Velvet Revolution, Palach (along with Zajíc) was commemorated in Prague by a bronze cross embedded at the spot where he fell outside the National Museum, as well as a square named in his honour. The Czech astronomer Luboš Kohoutek, who left Czechoslovakia the following year, named an asteroid which had been discovered on 22 August 1969, after Jan Palach (1834 Palach). There are several other memorials to Palach in cities throughout Europe, including a small memorial inside the glacier tunnels beneath the Jungfraujoch in Switzerland.

Several later incidents of self-immolation may have been influenced by the example of Palach and his media popularity. In the spring of 2003, a total of six young Czechs burned themselves to death,[7] notably Zdeněk Adamec, a 19-year-old student from Humpolec who burned himself on 6 March 2003 on almost the same spot in front of the National Museum where Palach burnt himself, leaving a suicide note explicitly referring to Palach and the others who had committed suicide in the 1969 Prague Spring.[8])

Just walking distance from the site of Palach’s self-immolation, a statuary in Prague’s Old Town Square honours iconic Bohemian religious thinker Jan Hus, who was burned at the stake for his beliefs in 1415. Himself celebrated as a national hero for many centuries, some commentary has linked Palach’s self-immolation to the execution of Hus.[9][10][11]

The music video for the song “Club Foot” by the band Kasabian is dedicated to Palach. The composition “The Funeral of Jan Palach” performed by The Zippo Band and composed by Phil Kline is a tribute. He is mentioned in The Stranglers‘ bassist, Jean-Jacques Burnel‘s 1979 solo album, Euroman Cometh.

After seeking political asylum in the United States, Polish artist Wiktor Szostalo commemorated Jan Palach in his “Performance for Freedom” proclaiming “I am Jan Palach. I’m a Czech, I’m a Pole, a Lithuanian, a Vietnamese, an Afghani, a betrayed You. After I’ve burnt myself a thousand times, perhaps we’ll win”.[12]

On the occasion of the 40th anniversary of the death of Jan Palach, a statue sculpted by András Beck as a tribute to the student was transported from France to the Czech Republic. The statue was installed in Mělník, the city where Jan Palach did his studies.[13]

The Luxembourg-based Welsh composer Dafydd Bullock was commissioned to write “Requiem for Jan Palach” (op 182) to commemorate the fortieth anniversary of Palach’s suicide. It includes a setting of words which appeared briefly on a statue in Wenceslas Square after the event, before being erased by the authorities: “Do not be indifferent to the day when the light of the future was carried forward by a burning body”.[14]

In their 1983 song “Nuuj Helde” the Janse Bagge Bend (from the Netherlands) asks whether people know why Jan Palach burned. This song was meant to make the general public aware of heroes.

Palach featured in a monologue radio play entitled “Torch No 1” on BBC Radio 4, directed by Martin Jenkins, and written by David Pownall. Palach was played by Karl Davies.[15]

A sequence of poems exploring the implications of Palach’s death called One Match by the poet Sheila Hamilton were published in issue 51 of the Dorset-based poetry serial, Tears in the Fence (ed. David Caddy) in 2010.

A three-part 2013 Czech-Polish television show “Burning Bush“, directed by Agnieszka Holland, is situated around the events that happened after Jan Palach’s self-immolation.

In the Czech republic, many towns have streets or squares named after Palach, of which perhaps most notable is the Jan Palach Square in central Prague. He also had streets named after him in Luxembourg city (Luxembourg), Angers and Parthenay (France), Kraków (Poland), Assen and Haarlem (Netherlands), Varna (Bulgaria) and Nantwich (United Kingdom). In Rome (Italy) (as well as in many other Italian towns), there is a central square named after Palach with a commemorative statue.

The oldest rock club in Croatia is named Palach. It is situated in Rijeka since 1969 to this day. There is a bus station in the town of Curepipe, Mauritius named after Jan Palach. A student hall in Venice, Italy on the Giudecca island has also been given the name of Jan Palach.