Actor Alan Rickman, known for films including Harry Potter, Die Hard and Robin Hood: Prince of Thieves, has died at the age of 69, his family has said.

The star had been suffering from cancer, a statement said.

He became one of Britain’s best-loved acting stars thanks to roles including Professor Snape in the Harry Potter films and Hans Gruber in Die Hard.

Harry Potter author JK Rowling led the tributes, describing him as “a magnificent actor and a wonderful man”.

She wrote on Twitter: “There are no words to express how shocked and devastated I am to hear of Alan Rickman’s death.”

She added: “My thoughts are with [Rickman’s wife] Rima and the rest of Alan’s family. We have all lost a great talent. They have lost part of their hearts.”

Alan Sidney Patrick Rickman (21 February 1946 – 14 January 2016) was an English actor and director, known for playing a variety of roles on stage and screen, often as a complex antagonist. Rickman was a member of the Royal Shakespeare Company performing in both modern and classical theatre productions. His first major television role came in 1982, but his big break was his role as the Vicomte de Valmont in the stage production of Les Liaisons Dangereuses in 1985, for which he was nominated for a Tony Award. Rickman gained wider notice for his film performances as Hans Gruber in Die Hard and Severus Snape in the Harry Potter film series.

In 1995, Rickman was awarded a Golden Globe Award, an Emmy Award and a Screen Actors Guild Award for his portrayal of Rasputin in Rasputin: Dark Servant of Destiny. He won a BAFTA Award for his role in Robin Hood. He was godfather to actor Tom Burke.[1]

Rickman was born in Acton, London,[2][3] to a working class family, the son of Margaret Doreen Rose (née Bartlett), a housewife, and Bernard Rickman, a factory worker.[4] His ancestry was English, Irish and Welsh; his father was Catholic and his mother a Methodist.[5][6] His family included an older brother, David (b. 1944), a graphic designer, a younger brother, Michael (b. 1947), a tennis coach, and a younger sister, Sheila (b. 1950).[5][7] Rickman attended Derwentwater Primary School, in Acton, a school that followed the Montessori method of education.[8]

When he was eight, Rickman’s father died, leaving his mother to raise him and his three siblings mostly alone. She married again, but divorced his stepfather after three years. “There was one love in her life”, Rickman later said of her.[5] He excelled at calligraphy and watercolour painting. From Derwentwater Junior School he won a scholarship to Latymer Upper School in London, where he became involved in drama. After leaving Latymer, he attended Chelsea College of Art and Design and then the Royal College of Art. This education allowed him to work as a graphic designer for the radical newspaper the Notting Hill Herald,[9] which he considered a more stable occupation than acting. “Drama school wasn’t considered the sensible thing to do at 18”, he said.[10]

After graduation, Rickman and several friends opened a graphic design studio called Graphiti, but after three years of successful business, he decided that if he was going to pursue acting professionally, it was now or never. He wrote to the Royal Academy of Dramatic Art (RADA) requesting an audition[11] and was awarded a place at RADA, which he attended from 1972-74. While there, he studied Shakespeare and supported himself by working as a dresser for Nigel Hawthorne and Sir Ralph Richardson.[12] He left after winning several prizes, including the Emile Littler Prize, the Forbes Robertson Prize and the Bancroft Gold Medal.[citation needed]

After graduating from RADA, Rickman worked extensively with British repertory and experimental theatre groups in productions including Chekhov‘s The Seagull and Snoo Wilson‘s The Grass Widow at the Royal Court Theatre, and appeared three times at the Edinburgh International Festival. In 1978, he performed with the Court Drama Group, gaining parts in Romeo and Juliet and A View from the Bridge, among other plays. While working with the Royal Shakespeare Company (RSC) he was cast in As You Like It. He appeared in the BBC’s adaptation of Trollope‘s first two Barchester novels known as The Barchester Chronicles (1982), as the Reverend Obadiah Slope.

He was given the male lead, the Vicomte de Valmont, in the 1985 Royal Shakespeare Company’s production of Christopher Hampton‘s adaptation of Les Liaisons Dangereuses, directed by Howard Davies.[13] After the RSC production transferred to Broadway in 1987, Rickman received both a Tony Award nomination[14] and a Drama Desk Award nomination for his performance.

His career was filled with a wide variety of roles. He played romantic leads like Colonel Brandon in Sense and Sensibility (1995), and Jamie in Truly, Madly, Deeply (1991); numerous villains in Hollywood big budget films, like German terrorist Hans Gruber in Die Hard (1988) and the Sheriff of Nottingham in Robin Hood: Prince of Thieves (1991); the very occasional television role such as the “mad monk” Rasputin in an HBO biopic Rasputin: Dark Servant of Destiny (1996), for which he won a Golden Globe and an Emmy.[15] In 1992, he was the “master of ceremonies” on Mike Oldfield‘s album Tubular Bells II where he read off a list of instruments on the album.

His role in Die Hard earned him a spot on the AFI’s 100 Years…100 Heroes & Villains as the 46th best villain in film history, though he revealed he almost did not take the role as he did not think Die Hard was the kind of film he wanted to make.[16] His performance as the Sheriff of Nottingham in Robin Hood: Prince of Thieves also made him known as one of the best actors to portray a villain in films.[17][18]

Rickman took issue with being typecast as a “villain actor”, citing the fact that he had not portrayed a stock villain character since the Sheriff of Nottingham in 1991. He played the ambiguous character of Severus Snape, the potions master in the Harry Potter series (2001–11). During his career Rickman played comedic roles, sending up classically trained British actors who take on “lesser roles” as the character Sir Alexander Dane/Dr. Lazarus in the science fiction parody Galaxy Quest (1999), portraying the angel Metatron, the voice of God, in Dogma (also 1999), appearing as Emma Thompson‘s foolish husband Harry in Love Actually (2003), providing the voice of Marvin the Paranoid Android in The Hitchhiker’s Guide to the Galaxy, and the egotistical, Nobel Prize-winning father in Nobel Son.[citation needed] 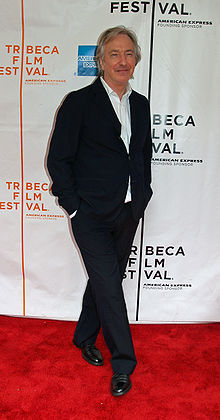 Rickman at the 2007 Tribeca Film Festival

Rickman was nominated for an Emmy for his work as Dr. Alfred Blalock in HBO’s Something the Lord Made (2004). He also starred in the independent film Snow Cake (with Sigourney Weaver and Carrie-Anne Moss) which had its debut at the Berlin International Film Festival, and also Perfume: The Story of a Murderer (with Dustin Hoffman), directed by Tom Tykwer. Rickman appeared as the evil Judge Turpin in the critically acclaimed Sweeney Todd: The Demon Barber of Fleet Street (2007) directed by Tim Burton, alongside Harry Potter co-stars Helena Bonham Carter and Timothy Spall. Rickman also appeared as Absolem the Caterpillar in Burton’s film Alice in Wonderland (2010).[citation needed]

He performed onstage in Noël Coward‘s romantic comedy Private Lives, which transferred to Broadway after its successful run in London at the Albery Theatre and ended in September 2002; he reunited with his Les Liaisons Dangereuses co-star Lindsay Duncan and director Howard Davies in the Tony Award-winning production. His previous stage performance was as Mark Antony, opposite Dame Helen Mirren as Cleopatra, in the Royal National Theatre’s production of Antony and Cleopatra at the Olivier Theatre in London, which ran from 20 October to 3 December 1998. Rickman appeared in Victoria Wood with All The Trimmings (2000), a Christmas special with Victoria Wood, playing an aged colonel in the battle of Waterloo who is forced to break off his engagement to Honeysuckle Weeks‘ character. Harry Potter co-star Imelda Staunton also appeared in the special. Rickman was originally cast as the voice of Lord Farquaad in the movie Shrek, but he turned it down to play Severus Snape instead. He was replaced by John Lithgow.[citation needed]

Rickman had also directed The Winter Guest at London’s Almeida Theatre in 1995 and the film version of the same play in 1996 starring Emma Thompson and her real life mother Phyllida Law. He compiled (with Katharine Viner) and directed the play My Name Is Rachel Corrie in April 2005 at the Royal Court Theatre, London, and won the Theatre Goers’ Choice Awards for Best Director. In 2009, Rickman was awarded the James Joyce Award by University College Dublin’s Literary and Historical Society.[19]

In October and November 2010, Rickman starred in the eponymous role in Henrik Ibsen‘s John Gabriel Borkman at the Abbey Theatre, Dublin alongside Lindsay Duncan and Fiona Shaw.[20] The Irish Independent called Rickman’s performance breathtaking.[21] This production subsequently travelled to the Brooklyn Academy of Music for performances in January and February 2011.[citation needed]

In 2011, Rickman again appeared as Severus Snape in the final installment in the Harry Potter series, Harry Potter and the Deathly Hallows – Part 2. Throughout the series, his portrayal of Snape garnered widespread critical acclaim.[22][23][24]

Kenneth Turan of The Los Angeles Times said Rickman “as always, makes the most lasting impression,”[25] while Peter Travers of Rolling Stone called Rickman “sublime at giving us a glimpse at last into the secret nurturing heart that […] Snape masks with a sneer.”[26] Media coverage characterised Rickman’s performance as worthy of an Academy Award for Best Supporting Actor nomination.[27][28][29][30][31]

On 21 November 2011, Rickman opened in Seminar, a new play by Theresa Rebeck, at the John Golden Theatre on Broadway.[33] Rickman, who left the production on 1 April, won the Broadway.com Audience Choice Award for Favorite Actor in a Play[34] and was nominated for a Drama League Award.[35]

Rickman starred with Colin Firth and Cameron Diaz in a remake of 1966’s Gambit by Michael Hoffman.[36]

In 2013, he played Hilly Kristal, the founder of the famous East Village punk-rock club CBGB, in the CBGB film with Rupert Grint.[37]

He was voted No 19 in Empire magazine’s Greatest Living Movie Stars over the age of 50 and was twice nominated for Broadway’s Tony Award as Best Actor (Play): in 1987 for Les Liaisons Dangereuses, and in 2002 for a revival of Noël Coward‘s Private Lives. The Guardian named Rickman as an “honourable mention” in a list of the best actors never to have received an Academy Award nomination.[38]

Two researchers, a linguist and a sound engineer, found “the perfect [male] voice” to be a combination of Rickman’s and Jeremy Irons‘s voices based on a sample of 50 voices.[39]

Rickman featured in several musical works – most notably in a song composed by the English songwriter Adam Leonard entitled “Not Alan Rickman”.[40] Moreover, the actor played a “Master of Ceremonies” part in announcing the various instruments in Mike Oldfield‘s Tubular Bells II on the track The Bell.[41] Rickman was one of the many artists who recited Shakespearian sonnets on the 2002 album When Love Speaks, and is also featured prominently in a music video by the band Texas entitled “In Demand“,[42] which premiered on Europe MTV in August 2000.

In 1965, at the age of 19, Rickman met 18-year-old Rima Horton, who became his first girlfriend and would later be a Labour Party councillor on the Kensington and Chelsea London Borough Council (1986–2006) and an economics lecturer at the nearby Kingston University.[43][44][45] They lived together from 1977 until his death.

In 2015, Rickman confirmed that they had married in a private ceremony in New York City in 2012.[46][47] He was an active patron of the charity Saving Faces[48] and honorary president of the International Performers’ Aid Trust, a charity that alleviates poverty in some of the world’s toughest conditions.[49]

When discussing politics, Rickman said he “was born a card-carrying member of the Labour Party”.[citation needed]

Rickman’s family reported on 14 January 2016 that he had died, aged 69. He had been suffering from cancer