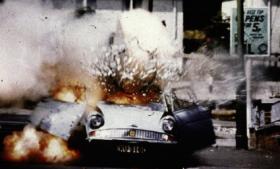 The IRA began a bombing campaign on Britain on 8 March 1973 when they exploded a car bomb outside the Old Bailey which injured 180 people and one man died from a heart attack. The IRA unit responsible for the Old Bailey bombing were arrested trying to leave the country.

Thereafter to try to help avoid their active service units (ASUs) from being captured and to have a better chance of carrying out a sustained bombing assault , the IRA decided to send to England sleeper cells who would arrive within weeks before actually carrying out any military activity and blend in with the public as not to draw attention to themselves. According to the leader of the Balcombe Street unit, the first bombing they carried out was the Guildford pub bombings on 5 October 1974, which killed five people and injured over 60 for which four innocent people known as the Guildford Four were arrested and received large jail sentences.

In February 1975 the Provisional Irish Republican Army agreed to a truce and ceasefire with the British government and the Northern Ireland Office.  Several “incident centres” were established in Irish nationalist areas in Northern Ireland to monitor the ceasefire and the activity of the security forces. Before the truce, the IRA ASU, later dubbed the Balcombe Street Gang (because of the December 1975 Balcombe Street siege), had been bombing targets in England since autumn 1974, particularly in London and surrounding areas.

Their last attack was an assassination attempt on former Prime Minister Edward Heath but he was not home when the attackers threw a bomb into his bedroom window on 22 December 1974.

After the 1975 PIRA–British Army truce began to break, the IRA’s Balcombe Street ASU stepped up its bombing and shooting campaign on mainland Britain. On the night of 18 November 1975 the unit picked Walton’s Restaurant to bomb. Two civilians, Audrey Edgson (aged 45) and Theodore Williams (aged 49), were killed  when a bomb was thrown by one of the IRA Volunteers through the window of Walton’s Restaurant in Walton Street, Chelsea.

The device injured 23 other people, the oldest of them 71 years of age. In the bomb the IRA used miniature ball bearings to maximise injuries. Two persons, a man and woman, died at St. Stephen’s Hospital shortly after being taken there. According to Dr. Laurence Martin the consultant in charge of the casualty department in St. Stephen’s Hospital said that four of those injured required emergency operations.

“We have been involved with nine bomb incidents in the past two years but this is the worst,”

Senior Scotland Yard official, James Nevin, deputy head of the bomb squad, said that the bomb used in the attack had been a “shrapnel‐like device.” containing three pounds of explosives.

“This was obviously designed to kill and injure people rather than damage property,”

This was a calculated bombing campaign aimed at destroying businesses and scaring customers in London’s West End.

Other previous attacks by the unit in 1975 included Scott’s Oyster Bar bombing on 12 November, the London Hilton bombing on 5 September and the Caterham Arms Pub Bombingon 27 August. In total the unit carried out around 40 bomb and gun attacks on mainland Britain between October 1974 – December 1975.

The unit would eventually end up exploding close to 50 bombs in England and carried out several shootings which cost millions of pounds in damages, claimed the lives of 18 people, which included 10 civilians, 7 British soldiers and one London police officer, and injured almost 400 people, but they were only sentenced for the deaths of seven people.

The IRA would continue to attack targets in England during the rest of the 1970s and throughout the 1980s but would not launch such a sustained campaign on the British mainland again until the early 1990s.

In custody the ASU also admitted to carrying out the Guildford pub bombings and the Kings Arms, Woolwich bombing for which the Guildford Four had been arrested, and received lengthy jail terms