The Gentleman Usher of the Black Rod, generally shortened to Black Rod, is an official in the parliaments of several Commonwealth countries. The position originates in the House of Lords of the Parliament of the United Kingdom. 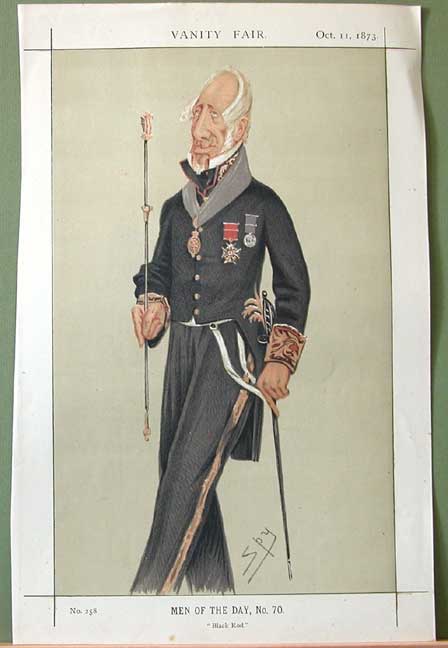 In the United Kingdom, Black Rod is responsible for maintaining the buildings, services, and security of the Palace of Westminster.

The office was created in 1350 by royal letters patent, though the current title dates from 1522. The position was adopted by other members of the Commonwealth when they adopted the British Westminster system. The title is derived from the staff of office, an ebony staff topped with a golden lion, which is the main symbol of the office’s authority.

Black Rod is formally appointed by the Crown based on a recruitment search performed by the Clerk of the Parliaments, to whom he reports. Prior to 2002 the office rotated among retired senior officers from the Royal Navy, the British Army and the Royal Air Force. It is now advertised openly. Black Rod is an officer of the English Order of the Garter, and is usually appointed Knight Bachelor if not already knighted. His deputy is the Yeoman Usher of the Black Rod.

He is responsible, as the representative of the Administration and Works Committee, for maintaining the buildings, services, and security of the Palace of Westminster. Black Rod’s official duties also include responsibility as the usher and doorkeeper at meetings of the Most Noble Order of the Garter; the personal attendant of the Sovereign in the Lords; as secretary to the Lord Great Chamberlain and as the Sergeant-at-Arms and Keeper of the Doors of the House, in charge of the admission of strangers to the House of Lords. Either Black Rod or his deputy, the Yeoman Usher, is required to be present when the House of Lords, the upper house of Parliament, is in session, and plays a role in the introduction of all new Lords Temporal in the House (but not of bishops as new Lords Spiritual). Black Rod also arrests any Lord guilty of breach of privilege or other Parliamentary offence, such as contempt or disorder, or the disturbance of the House’s proceedings. His equivalent for security in the House of Commons is the Serjeant at Arms.

Black Rod, along with his deputy, is responsible for organizing ceremonial events within the Palace of Westminster, providing leadership in guiding the significant logistics of running such events.

Black Rod is in theory responsible for carrying the Mace into and out of the chamber for the Speaker of the House of Lords (formerly the Lord Chancellor, now the Lord Speaker), though this role is delegated to the Yeoman Usher and Deputy Serjeant-at-Arms, or on judicial occasions, to the Lord Speaker’s deputy, the Assistant Serjeant-at-Arms. The mace was introduced in 1876.

Black Rod is best known for his part in the ceremonies surrounding the State Opening of Parliament and the Throne speech. He summons the Commons to attend the speech and leads them to the Lords. As part of the ritual, as Black Rod approaches the doors to the chamber of the House of Commons to make his summons, they are slammed in his face. This is to symbolize the Commons’ independence of the Sovereign. Black Rod then strikes the door three times with his staff, and is then admitted and issues the summons of the monarch to attend.

This ritual is derived from the attempt by King Charles I to arrest the Five Members in 1642, in what was seen as a breach of the constitution. This and prior actions of the King led to the Civil War. After that incident, the House of Commons has maintained its right to question the right of the monarch’s representative to enter their chamber, although they cannot bar him from entering with lawful authority. In recent years, Black Rod has received jibes on this annual occasion from the outspoken republican Labour MP Dennis Skinner