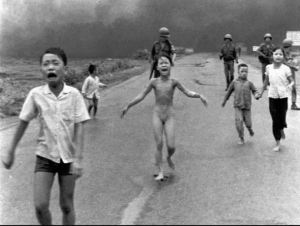 See pictures that changed the World

The Vietnam War (Vietnamese: Chiến tranh Việt Nam), also known as the Second Indochina War,[37] and also known in Vietnam as Resistance War Against America (Vietnamese: Kháng chiến chống Mỹ) or simply the American War, was a Cold War-era proxy war[38] that occurred in Vietnam, Laos, and Cambodia from 1 November 1955[A 1] to the fall of Saigon on 30 April 1975. This war followed the First Indochina War (1946–54) and was fought between North Vietnam—supported by the Soviet Union, China and other communist allies—and the government of South Vietnam—supported by the United States, Philippines and other anti-communist allies.[43] The Viet Cong (also known as the National Liberation Front, or NLF), a South Vietnamese communist common front aided by the North, fought a guerrilla war against anti-communist forces in the region. The People’s Army of Vietnam (also known as the North Vietnamese Army) engaged in a more conventional war, at times committing large units to battle.

Cold Blooded US Soldier in Vietnam speaks of his Killing Ethics

See Pictures that changed the World

As the war continued, the part of the Viet Cong in the fighting decreased as the role of the NVA grew. U.S. and South Vietnamese forces relied on air superiority and overwhelming firepower to conduct search and destroy operations, involving ground forces, artillery, and airstrikes. In the course of the war, the U.S. conducted a large-scale strategic bombing campaign against North Vietnam, and over time the North Vietnamese airspace became the most heavily defended in the world.[citation needed] 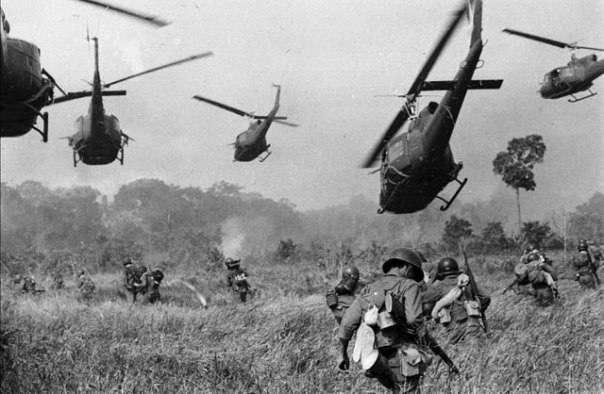 The U.S. government viewed its involvement in the war as a way to prevent a Communist takeover of South Vietnam. This was part of a wider containment policy, with the stated aim of stopping the spread of communism. The North Vietnamese government and the Viet Cong were fighting to reunify Vietnam under communist rule. They viewed the conflict as a colonial war, fought initially against forces from France and then America, and later against South Vietnam.[44]

Beginning in 1950, American military advisors arrived in what was then French Indochina.[45][A 3] U.S. involvement escalated in the early 1960s, with troop levels tripling in 1961 and again in 1962.[46] U.S. involvement escalated further following the 1964 Gulf of Tonkin incident, in which a U.S. destroyer clashed with North Vietnamese fast attack craft, which was followed by the Gulf of Tonkin Resolution, which gave the U.S. president authorization to increase U.S. military presence. Regular U.S. combat units were deployed beginning in 1965. Operations crossed international borders: bordering areas of Laos and Cambodia were heavily bombed by U.S. forces as American involvement in the war peaked in 1968, the same year that the communist side launched the Tet Offensive. The Tet Offensive failed in its goal of overthrowing the South Vietnamese government but became the turning point in the war, as it persuaded a large segment of the United States population that its government’s claims of progress toward winning the war were illusory despite many years of massive U.S. military aid to South Vietnam.

Gradual withdrawal of U.S. ground forces began as part of “Vietnamization“, which aimed to end American involvement in the war while transferring the task of fighting the Communists to the South Vietnamese themselves. Despite the Paris Peace Accord, which was signed by all parties in January 1973, the fighting continued. In the U.S. and the Western world, a large anti-Vietnam War movement developed as part of a larger counterculture. The war changed the dynamics between the Eastern and Western Blocs, and altered North-South relations.[47]