Top ISIS commander ‘Omar the Chechen ‘ believed to have been killed in airstrike.

This is the third or fourth time he has reportedly been killed and like any death of Islamic States  top  leaders confirmation is slow and details are often hidden behind the fog of  war.

However US sources are confident they have got it right this time and if so this will be a major blow to the disciples  of hate and the twisted ideology of  Islamic State and their deluded followers.

The Syrian Democratic Forces have been celebrating a string of victories as they reclaim villages from Isis control, putting them within 20 miles of Raqqa
See Independent for full story

Without a doubt the forces against IS are slowly gaining the upper hand and IS’s  area of control is reducing almost daily. Desertion among their members has become such an issue that it carries a mandatory death sentence and according to local sources the majority of deserters are foreign and European fighters whom have become disillusioned  with the harsh conditions and religious  fanaticism.

Whatever is causing disharmony among these monstrous Jihadists  is good news for the world in general and the death of the Chechen is another nail in the coffin which will send these scum straight to HELL! 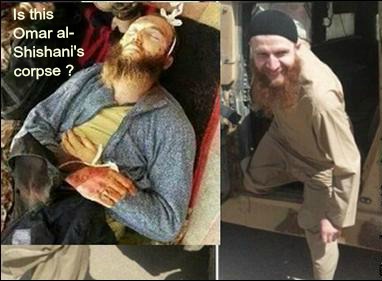 According to officials, he survived an initial attack carried out in the beginning of March, but has since died of his wounds, Martin reports. A U.S. official previously said an attack was carried out March 4 by multiple waves of planes and drone aircraft.

Al-Shishani, whose real name was Tarkhan Batirashvili, was described as the Islamic State of Iraq and Syria (ISIS) equivalent of a Secretary of Defense. He was an ethnic Chechen from the former Soviet Republic of Georgia.

The U.S. government had a longstanding $5-million bounty for information leading to his being brought to justice.

In announcing the strike last week, Pentagon press secretary Peter Cook said it occurred near al-Shaddadeh, a former ISIS stronghold that was captured in February by the U.S.-backed, predominantly Kurdish Syria Democratic Forces. He said the ISIS leader held numerous senior military positions within the group, including “minister of war,” and was based in Raqqa, Syria.

A veteran of the 2008 Russo-Georgian War, Batirashvili became a jihadist after being discharged from the Georgian military and served in various command positions with Islamist militant groups fighting in the Syrian Civil War. Batirashvili was previously the leader of the rebel group Muhajireen Brigade (Emigrants Brigade), and its successor, Jaish al-Muhajireen wal-Ansar (Army of Emigrants and Supporters).

In May 2013, Batirashvili was appointed northern commander for ISIL, with authority over ISIL’s military operations and forces in northern Syria, specifically Aleppo, al-Raqqah, Latakia, and northern Idlib Provinces.By late 2013, he was the ISIL amir (leader) for northern Syria and was operating in and around Aleppo Province. He was also in charge of fighters from Chechnya and elsewhere in the Caucasus.[10] Units under his command participated in major assaults on Syrian military bases in and around Aleppo, including the capture of Menagh Airbase in August 2013.[3] He was considered “one of the most influential military leaders of the Syrian opposition forces”.[2] By mid-2014, Batirashvili was a senior ISIL commander and Shura Council member based in al-Raqqah, Syria.[10]

The US Treasury Department added Batirashvili to its list of Specially Designated Global Terrorists on 24 September 2014.[11] On 5 May 2015, The U.S. State Department Rewards for Justice Program announced a reward up to US$5 million for information leading to his capture.[12][13]

Batirashvili died from his injuries several days after being the target of a 4 March 2016 U.S. Airstrike near the al-Shaddadi region in Northern Syria, according to U.S. officials

Tarkhan Tayumurazovich Batirashvili was born in the Georgian SSR, Soviet Union (now Georgia) in 1986. His father, Teimuraz Batirashvili, is an ethnic Georgian and Orthodox Christian. His mother was a Muslim Kist—an ethnic Chechen subgroup from Georgia’s Pankisi Gorge—of the Melkhi clan.[2][15][16]

Batirashvili grew up in the largely Kist-populated village of Birkiani, located in the Pankisi Gorge in northeast Georgia. In his youth, he worked as a shepherd in the hills above the gorge. Later in the 1990s, the Pankisi Gorge was a major transit point for rebels participating in the Second Chechen War, and it was there that Batirashvili reportedly came into contact with the Chechen rebels moving into Russia.[17] According to his father, a young Batirashvili secretly helped Chechen militants into Russia and sometimes joined them on missions against Russian troops.[3]

Service in the Georgian Armed Forces

After finishing high school, Batirashvili joined the Georgian Army and distinguished himself as master of various weaponry and maps, according to his former commander Malkhaz Topuria, who recruited him into a special reconnaissance group.[3] His unit was trained by US special forces, and Batirashvili was reportedly a “star pupil”.[18] He rose to the rank of sergeant in a newly formed intelligence unit, and during the 2008 Russo-Georgian War he served near the front line at the Battle of Tskhinvali, spying on Russian tank columns and relaying their coordinates to Georgian artillery units.[3] Batirashvili’s unit inflicted serious damage on the Russians, and among the actions they participated in was an attack on a column of the Russian 58th Army during which the commander of the 58th Army, General Anatoly Khrulyov, was wounded.[18]

Batirashvili was never decorated for his military service.[2] He was due to be promoted to become an officer, but in 2010 he was diagnosed with tuberculosis. After spending several months in a military hospital, he was discharged on medical grounds. He tried and failed to re-enlist.[3][17] Upon returning home, he was unable to secure work in the local police force. Around this time, his mother also died of cancer. According to his father, he became “very disillusioned”.[3]

According to the Georgian Defense Ministry, Batirashvili was arrested in September 2010 for illegally harboring weapons and was sentenced to three years in prison.[3] He was allegedly released after serving about 16 months in early 2012 and immediately left the country. According to an interview on a jihadist website, Batirashvili said that prison transformed him; “I promised God that if I come out of prison alive, I’ll go fight jihad for the sake of God”, he said.[3]

Batirashvili reportedly told his father that he was leaving for Istanbul, where members of the Chechen diaspora were ready to recruit him to lead fighters inside war-ravaged Syria; an older brother had already gone to Syria some months before.[3] In an interview, Batirashvili said that he had considered going to Yemen and briefly lived in Egypt before ultimately arriving in Syria in March 2012.[19][20]

His first command was the Muhajireen Brigade, an Islamist jihadist group made up of foreign fighters that was formed in the summer of 2012. His unit became involved in the Battle of Aleppo, and in October 2012 they assisted Al-Nusra Front in a raid on an air defense and Scud missile base in Aleppo.[8]

In December 2012, they fought alongside Al-Nusra Front during the overrunning of the Sheikh Suleiman Army base in Western Aleppo. In February 2013, together with the Tawhid Brigades and Al-Nusra Front, they stormed the base of the Syrian military’s 80th Regiment near the main airport in Aleppo.[21]

In March 2013, Kavkaz Center reported that the Muhajireen Brigade had merged with two Syrian jihadist groups called Jaish Muhammad and Kataeb Khattab to form a new group called Jaish al-Muhajireen wal-Ansar, or Army of Emigrants and Helpers.[22] The group played a key role in the August 2013 capture of Menagh Air Base, which culminated in a Vehicle Borne Improvised Explosive Device (VBIED) driven by two of their members killing and wounding many of the last remaining Syrian Armed Forces defenders.[23] A branch of the Muhajireen Brigade was involved in the 2013 Latakia offensive.[24]

Islamic State of Iraq and the Levant

In Mid 2013, Batirashvili made an oath of allegiance to Abu Bakr al-Baghdadi and was appointed northern commander for the Islamic State of Iraq and the Levant (ISIL).[25] In August 2013, Batirashvili released a statement announcing the expulsion of one of his commanders, Emir Seyfullah, and twenty-seven of his fighters. Batirashvili accused the men of embezzlement and stirring up the animosity of local Syrians against the foreign fighters by indulging in takfir—excommunication—against other Muslims.[26] However, Seyfullah denied these allegations and claimed that the dispute was due to his refusal to join ISIL with Batirashvili.[27] In late 2013, Batirashvili was replaced as leader of Jaish al-Muhajireen wal-Ansar by another Chechen commander known as Salahuddin, as most of the Chechen members of the group did not support Batirashvili’s support of ISIL, due to their preexisting oath to the Caucasus Emirate militant group, and it’s leader Dokka Umarov.[2][6] By mid-2014, Batirashvili was a senior ISIL commander and Shura Council member operating in Ar-Raqqah, Syria.[25]

According to Batirashvili’s father, he called him once since he left for Syria to tell him that he was now married to a Chechen woman and had a daughter named Sophia.[15] For a time, Batirashvili lived with his family in a large villa owned by a businessman in the town of Huraytan just northwest of Aleppo.[28] He is said to have overseen the group’s prison facility near Ar-Raqqah, where foreign hostages may have been held.[29] By 2016, Batirashvili led special battalions of the Islamic State, in particular a unit named as ‘the group of the central directorate’ which appears to be the primary special forces strike force of the group.[30]

Reports of death or capture

Shishani has been reported as being killed on numerous occasions. In 2014, there were reports that he had been killed in various parts of Syria and Iraq in May, June, August and October, all of which proved to be untrue.[31] On 13 November 2014, Chechen leader Ramzan Kadyrov posted on his personal Instagram account that al-Shishani had been killed, and posted a photo of a dead ginger-bearded man, however the man in the photograph was not Shishani, and Kadyrov later deleted the post. Before the post was deleted, the statement was picked up and reported on by many media outlets around the world.[31]

There were further reports of his death in 2015: in May,[32] June[33] and October.[34] On December 27, Russian News Agency TASS, quoting EIN news, claimed that American special forces had captured al-Shishani near Kirkuk in Iraq.[35] This report was denied by a Pentagon spokesman.[36]

In March 2016, several unnamed US Officials told CNN that Shishani may have been killed in a 4 March targeted airstrike, near the Syrian town of al-Shadadi; however, they were unable to confirm his death. Other officials said he had been “critically injured” in the strike, and that US military intelligence was assessing whether or not he had died.[37][38] On 12 March, the Syrian Observatory for Human Rights (SOHR) reported that al-Shishani had become clinically dead following the US airstrikes, with the ISIL commander in critical condition and unable to breathe without the use of life-support machines.[39][40] On 14 March 2016, two U.S. officials told CNN that there was confirmation al-Shishani had died after the airstrike