The first meeting of the Northern Ireland Housing Executive was held at Stormont.

[The headquarters and regional offices of the NIHE were to be the target of paramilitary attacks on many occasions during ‘the Troubles’.] 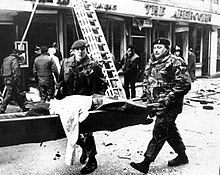 The Abercorn Restaurant in Belfast was bombed without warning. Two Catholic civilians were killed and over 130 people injured. The Irish Republican Army (IRA) did not claim responsibility for the bomb but were universally considered to have been involved.

The Stormont government refused to hand over control of law and order to Westminster control.

Those Unionists who were in favour of the Assembly and the Executive decided that the Sunnindale Agreement  should not be ratified unless Articles 2 and 3 of the Irish  Constitution   were repealed.

. [Public Records 1974 – Released 1 January 2005: Note of a meeting that took place in Northern Ireland on Monday 4 March 1974. Those attending were Brian Faulkner, then Chief Executive of the Northern Ireland Executive, Kenneth Bloomfield, Northern Ireland Civil Servant, and Frank Cooper, then Permanet Secretary at the Northern Ireland Office (NIO). The meeting discussed the implications of the result of the Westminster General Election (NI) held on Thursday  28th February 1972

By-Election in South Belfast Following the killing of Robert Bradford on 14 November 1981 there was a  by – election in the constituency of South Belfast to fill the vacant Westminster seat.

Martin Smyth, then head of the Orange Order, won the election as a Ulster Unionist Party (UUP) candidate.

[The election campaign was marked by antagonism between the UUP and the Democratic Unionist Party (DUP) who both fielded candidates.]

Gerard Tuite, formerly a member of the Irish Republican Army (IRA), was arrested in the Republic of Ireland following a period ‘on the run’.

[Tuite became the first person to be charged in the Republic for offences committed in Britain. He had escaped from Brixton Prison in London on 16 December 1980 where he had been serving a sentence for bombing offences in London in 1978. He was sentenced in July 1982 to 10 years imprisonment.]

Tom King, then Secretary of State for Northern Ireland, speaking in the House of Commons said that Unionist Members of Parliament (MPs) had made common cause with men in paramilitary uniforms.

Councillors in Belfast City Council voted by 21 to 19 to end the ban on visits by government ministers.

[The first visit by a government minister since the signing of the Anglo-Irish Agreement (AIA) took place on 25 March 1991.]

Hugh Annesley, then Chief Constable of the Royal Ulster Constabulary (RUC), was subpoenaed to produce the Stalker report in order to assist the ‘shoot to kill’ inquest.

Proximity Talks Launch of a period of intensive consultations between the Northern Ireland political parties at Stormont. The Ulster Unionist Party (UUP) and the Democratic Unionist Party (DUP) refused to join these ‘proximity’ talks. Sinn Féin (SF) were refused entry to the talks.

Patrick Mayhew, then Secretary of State for Northern Ireland, and Dick Spring, then Tánaiste (deputy Irish Prime Minister and Minister for Foreign Affairs), met a number of the other parties.

The Radio Telefis Éireann (RTE) programme Prime Time claimed that Gerry Adams, then President of Sinn Féin (SF), had indicated that SF was “behind” some of the residents groups that were opposing Orange Order parades.

[Adams was alleged to have made the comments at a Republican conference in Athboy, County Meath on 23 November 1996. SF denied the claims.]

The impact of the double killing in the village of Poyntzpass, County Armagh, on 3 March 1998 continued to be felt across Northern Ireland. In a rare show of unity David Trimble, then leader of the Ulster Unionist Party (UUP), and Seamus Mallon, then Deputy leader of the Social Democratic and Labour Party (SDLP), and the Member of Parliament (MP) for the area, walked through the village together to pay their respect to the families of those killed and to condemn the killings

. Leaders of the main Churches in Ireland issued a strong condemnation of the violence that had escalated since 27 December 1997.

The British government issued a discussion paper on the future of policing in Northern Ireland. John McDonnell, then a Labour Member of Parliament (MP), said that the Irish in Britain should be treated as a separate ethnic category in the census in 2001.

Final details of four new British-Irish treaties were agreed between the Bertie Ahern, then Taoiseach (Irish Prime Minister), and David Trimble, then First Minister Designate. The treaties provide for the establishment, in principle, of North-South bodies and other institutions in the Good Friday Agreement. The principal treaty would establish the six North-South implementation bodies that had been agreed before Christmas.

The other one-page treaties allowed for the setting up of the North-South ministerial council, the British-Irish council and the new British-Irish inter-governmental conference.

[The treaties were signed by the two governments on 8 March 1999.]

Tony Blair, then British Prime Minister, called on the Irish Republican Army (IRA) to begin handing over its weapons before Sinn Féin (SF) joined an Executive Committee. An opinion poll commissioned by the British Broadcasting Corporation (BBC) and Price Waterhouse Coopers indicated that, of those asked, only 41 per cent of Unionists now supported the Good Friday Agreement.

Bomb Explosion in London A car-bomb exploded outside British Broadcasting Corporation (BBC) Television Centre in west London at 12.30am (00.30GMT). A warning had been received at 11.20pm (23.20GMT) on Saturday evening. The bomb (thought to have contained 20 kilograms of home-made explosives) exploded as bomb squad officers tried to carry out a controlled explosion on a taxi left near Television Centre.

One man was injured in the explosion and there was some damage to surrounding buildings.

[The bomb was thought to have been planted by the “real” Irish Republican Army (rIRA). There was speculation that the bomb was in retaliation for last year’s Panorama programme which named four men allegedly responsible for the Omagh bombing.]

There was a sectarian attack on a young Catholic man (19) in north Belfast. Four youths stabbed him in the back as he was leaving the Yorkgate Centre. He suffered a collapsed lung and needed 15 stitches to the stab wound.

[The Yorkgate complex is on the interface between the Nationalist New Lodge area and the Loyalist Tigers Bay area. The four attackers ran towards Tigers Bay following the incident. Sinn Féin (SF) described the attack as attempted murder.]

A total of 28 windows were broken in a Catholic church in Newcastle, County Down.

The Belfast Telegraph (a Belfast based newsaper) reported on a paper entitled Post Mortem by Michael McKeown. The paper (which was circulated privately) was a study of the motives behind the killings that occurred during the conflict. McKeown used eight general categories, ranging from “counter insurgency” to “economic sabotage”, and applied one to each of the more than 3,600 deaths that occurred after 1969. His figures showed that 31.19 per cent of the deaths were attributable to attacks on security forces and most of these were carried out by Republican paramilitaries. 26.91 per cent were the result of sectarian attacks with the majority carried out by Loyalist paramilitaries. 18.52 per cent of killings were “punitive” attacks – killings carried out by paramilitaries to intimidate their own communities or protect rackets. ” Counter insurgency” killings accounted for 7.15 per cent of the deaths.

Unionist Members of Parliament (MPs) criticised the government in the House of Commons for not allowing more time to debate the Bill which is intended to review the criminal justice system in Northern Ireland.

[The issue of the use of Royal Crests in courtrooms and the flying of the Union Flag outside the buildings has proved controversial.]

Jeffrey Donaldson and David Burnside, then both Ulster Unionist Party (UUP) MPs, had a meeting with Ronnie Flanagan, then Chief Constable of the Police Service of Northern Ireland (PSNI), to discuss their concerns about the phasing out of the Police Reserve. Following the meeting Donaldson said that he believed that Flanagan would recommend the retention of the reserve force.

Killed by: Official Irish Republican Army (OIRA)
Found shot, by the side of Braehead Road, Derry.