Keith Palmer, GM (1969 – 22 March 2017) was a British police officer who was posthumously awarded the George Medal, the second highest award for gallantry “not in the face of the enemy“.

Though unarmed, he stopped a knife wielding terrorist from entering the Palace of Westminster during the 2017 Westminster attack; he died from wounds he received in this attack.

He had worked for the Metropolitan Police Service (MPS) for 16 years, and had joined the MPS’s Parliamentary and Diplomatic Protection Group in April 2016

In November 2001, Palmer joined the Metropolitan Police Service (MPS) as a police constable. From 2002 to 2009, he served in the London Borough of Bromley.

He then joined the Territorial Support Group, a grouping that specialises in public order and operates across Greater London. In 2015, he was nominated as “best thief taker” at the Commissioner’s Excellence Awards in recognition of making 150 arrests in twelve months.

In April 2016, he joined the MPS’s Parliamentary and Diplomatic Protection Group.

On 22 March 2017, Palmer was in New Palace Yard guarding the Palace of Westminster. 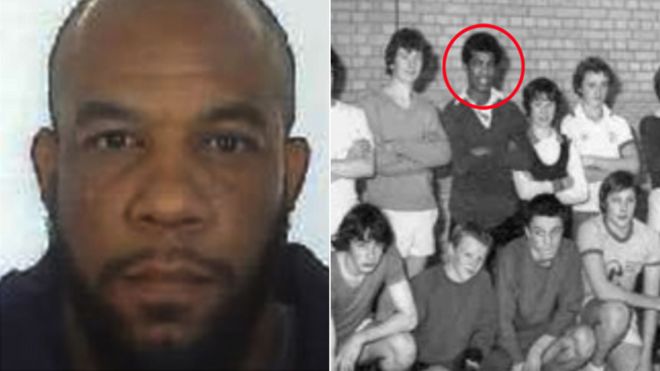 At approximately 14:40, he was approached by Khalid Masood who was armed with two knives. Though unarmed, Palmer confronted Masood in an attempt to stop him. Masood fatally injured Palmer during this encounter. 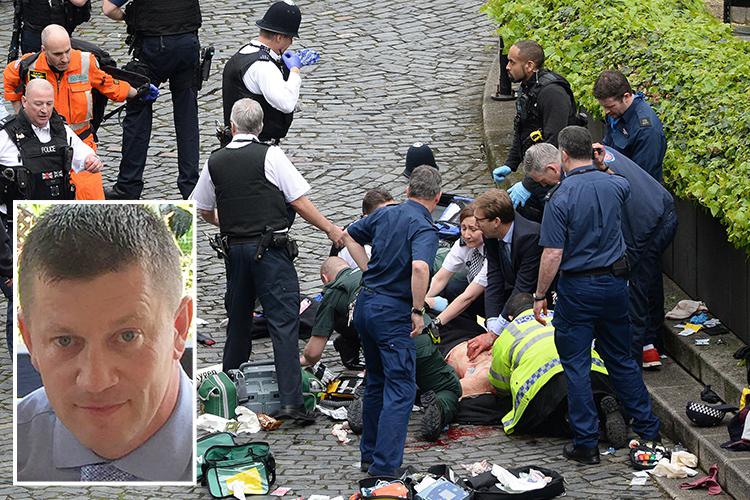 By confronting Masood, Palmer delayed him long enough for an armed policeman to arrive and shoot Masood dead.

Before the  funeral procession

Palmer was granted the rare honour of lying in rest in the Chapel of St Mary Undercroft, Palace of Westminster; other recipients of this honour include Margaret Thatcher and Tony Benn. On 9 April 2017, his coffin was received into the chapel with a guard of honour of police officers.

A private service was then held for his family.

Officers kept vigil next to the coffin overnight.

The following day, on 10 April, Palmer’s coffin travelled in procession to Southwark Cathedral. The route was 2.6-miles long and avoided Westminster Bridge where the terrorist attack had begun.

Instead, the procession crossed the Thames over Lambeth Bridge, during which a ten-second horn salute was given by boats on the river.

Tens of thousands of people lined the streets, including 5,000 police officers.

The procession was fronted by a colour party carrying the Metropolitan Police Service Standard, who were followed by five mounted police officers. Then came the funeral conductor and chaplains (including Rose Hudson-Wilkin, Chaplain to the House of Commons) who were walking in front of the hearse.

The hearse carried Palmer’s coffin which was draped in the police flag, and there were “red and white floral tributes atop the hearse”;

Making up the rear were cars carrying his family, and four more mounted officers.

Palmer was given a full police funeral at Southwark Cathedral. It was attended by his family and friends, and a number of dignitaries including Cressida Dick, the newly appointed Commissioner of the Metropolitan Police. 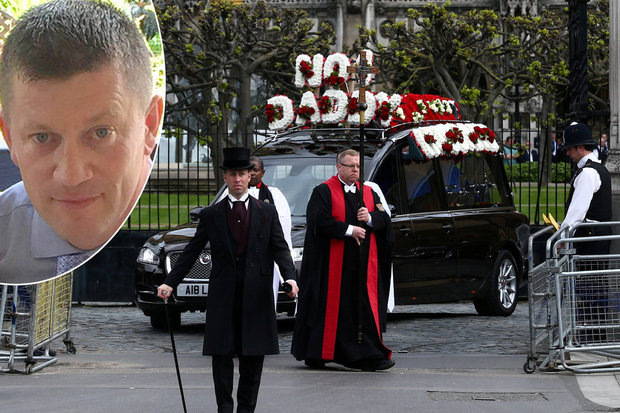 The hearse carrying Palmer’s coffin with ‘No 1 Daddy’ floral decoration.

Dick read the poem Funeral Blues by W. H. Auden at the service which was her first public engagement since taking up the post. The address was given by Andrew Nunn, the Dean of Southwark.

Palmer was married to his wife, Michelle. They have a daughter, who was aged five at the time of Palmer’s death.

Palmer was a supporter of Charlton Athletic F.C. and held a season ticket. The club honoured him by replacing his regular seat at The Valley stadium with “a white chair bearing his warrant number ‘P204752′”.

In the 2017 Birthday Honours, Palmer was awarded the George Medal (GM)

“for confronting an armed terrorist to protect others and Parliament”.

In recognition of his sacrifice, the Metropolitan Police Service retired his shoulder number (4157U) and stated that it would :

“not be reissued to any other officer”.

The medal is granted in recognition of “acts of great bravery”. The original warrant for the George Medal did not permit it to be awarded posthumously. This was changed in December 1977 to allow posthumous awards, several of which have been subsequently made.

The medal is primarily a civilian award, but it may be awarded to military personnel for gallant conduct that is not in the face of the enemy.

As the Warrant states:

The Medal is intended primarily for civilians and award in Our military services is to be confined to actions for which purely military Honours are not normally granted.

Bars are awarded to the GM in recognition of the performance of further acts of bravery meriting the award. In undress uniform or on occasions when the medal ribbon alone is worn, a silver rosette is worn on the ribbon to indicate each bar.

Recipients are entitled to the post-nominal letters GM.

The details of all awards to British and Commonwealth recipients are published in the London Gazette. Approximately 2,122 medals have been awarded since its inception in 1940.

See here for more details on:   The George Medal