The Bayeux Tapestry (UK: /baɪˈjɜːr/, US: /bɑːˈjuː, beɪ-/; French: Tapisserie de Bayeux, IPA: [tapisʁi də bajø], or La telle du conquest; Latin: Tapete Baiocense) is an embroidered cloth nearly 70 metres (230 ft) long and 50 centimetres (20 in) tall  , which depicts the events leading up to the Norman conquest of England concerning William, Duke of Normandy, and Harold, Earl of Wessex, later King of England, and culminating in the Battle of Hastings.

It is thought to date to the 11th century, within a few years after the battle. It tells the story from the point of view of the conquering Normans.

According to Sylvette Lemagnen, conservator of the tapestry, in her 2005 book La Tapisserie de Bayeux:

The Bayeux tapestry is one of the supreme achievements of the Norman Romanesque …. Its survival almost intact over nine centuries is little short of miraculous … Its exceptional length, the harmony and freshness of its colours, its exquisite workmanship, and the genius of its guiding spirit combine to make it endlessly fascinating.

The tapestry consists of some fifty scenes with Latin tituli, embroidered on linen with coloured woollen yarns. It is likely that it was commissioned by Bishop Odo, William’s half-brother, and made in England—not Bayeux—in the 1070s.

In 1729 the hanging was rediscovered by scholars at a time when it was being displayed annually in Bayeux Cathedral. The tapestry is now exhibited at the Musée de la Tapisserie de Bayeux in Bayeux, Normandy, 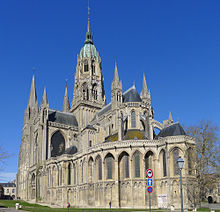 The designs on the Bayeux Tapestry are embroidered rather than woven, so that it is not technically a tapestry.

Nevertheless, it has always been referred to as a tapestry until recent years, when the name “Bayeux Embroidery” has gained ground among certain art historians. The tapestry can be seen as a perfect example of secular Norman art. Tapestries adorned both churches and wealthy houses in Medieval western Europe, though at 0.5 by 68.38 metres (1.6 by 224.3 ft, and apparently incomplete) the Bayeux Tapestry is exceptionally large. Only the figures and decoration are embroidered, on a background left plain, which shows the subject very clearly and was necessary to cover large areas.

See here for more info on the Bayeux Tapestry

The Tapestry – Scene by Scene

See below for the complete story