When investigators combed through the charred remains of the Fisher family’s burned down home in Scottsdale, Arizona, they uncovered evidence of a shocking triple murder.

It was April 10, 2001. Someone had cut the throats of Mary Fisher and her two children, Brittney, age 12 and Bobby, 10.
Mary Fisher also had been shot in the back of her head. The remains of all three victims were found in their beds. A natural gas line in the house had been severed. Someone poured a flammable liquid throughout the home to make the fire spread faster, lit a candle and then left.
Ten hours later, the home exploded and burned to the ground. What was left of Mary Fisher and the children’s bodies was barely recognizable. Mary Fisher’s husband, the children’s father — Robert Fisher, was nowhere to be found.
“All signs pointed to Robert Fisher as the suspect,” Scottsdale police Detective Hugh Lockerby told CNN’s “The Hunt with John Walsh.” Friends and neighbors said the couple had been having problems.

“They did not have a happy marriage,”
said Wade Rencsok, a former neighbor.

Police believe Mary Fisher was going to leave Robert and divorce him. But Robert Fisher, who’d suffered through his own parents’ divorce as a teen, “wasn’t going to let that happen,” Lockerby said. Robert Fisher made his living as a respiratory tech at a medical clinic. Before that, he’d worked as a firefighter and served in the Navy, where he’d tried out — and failed — to join the Navy SEAL program.
People who knew him said Fisher could be aggressive and controlling. He’d been a hunter and outdoorsman since he was a young adult.
Friends told stories about Fisher’s odd behavior — like when he killed an elk and then smeared its blood over his body.
Or the time during a fishing trip when he was seen swimming across a lake holding a Bowie knife in his teeth.
Investigators suspected Fisher had set his house on fire to destroy evidence of the killings and perhaps to fake his own death.
But a house fire wasn’t going to cover up the bullet that was lodged in Mary Fisher’s head. “Fires don’t burn bullets,” said retired Scottsdale police detective TJ Jiran.
A neighbor said they heard the couple arguing the night before the fire. Based on that, police guess the murders took place between 9:30 p.m. and 10:15 p.m.
At 10:43 p.m., Robert Fisher appeared on an ATM camera, along with Mary Fisher’s Toyota 4Runner.
Then 10 days after the house fire, the 4Runner was discovered parked empty in a remote pine forest northeast of Scottsdale. Police suspected Robert Fisher was hiding out in the area’s mountains, canyons and caves.
SWAT teams along with search and rescue units were called in to scour the area. “We did not find any evidence of Robert Fisher there,” Lockerby said. “We believe that he had some sort of alternate means to leave the area.”
Jiran said he spoke to a witness “that possibly saw” Fisher walking north on a road near where the 4Runner was discovered. “Is he living up there in the woods right now? Is he really that survivalist? Who knows what these guys do when they run?” Jiran said.
Fifteen years later, the mystery remains unsolved.
Is Robert Fisher dead?
Or has he been successfully dodging police and the FBI? Fisher was relatively young at the time of the house fire — 39 years old. Now he would be 54 — much older, with more physical limitations.
“I can’t picture Robert being alive and not contacting us for [so many] years,” said Robert Fisher’s sister Jean Rountree.

“So I have to believe there’s another answer out there.”

Fisher has been on the FBI’s Ten Most Wanted List since 2002. “We’ve tracked leads all over the world, but none have panned out,” said Lockerby.
See CNN for full story 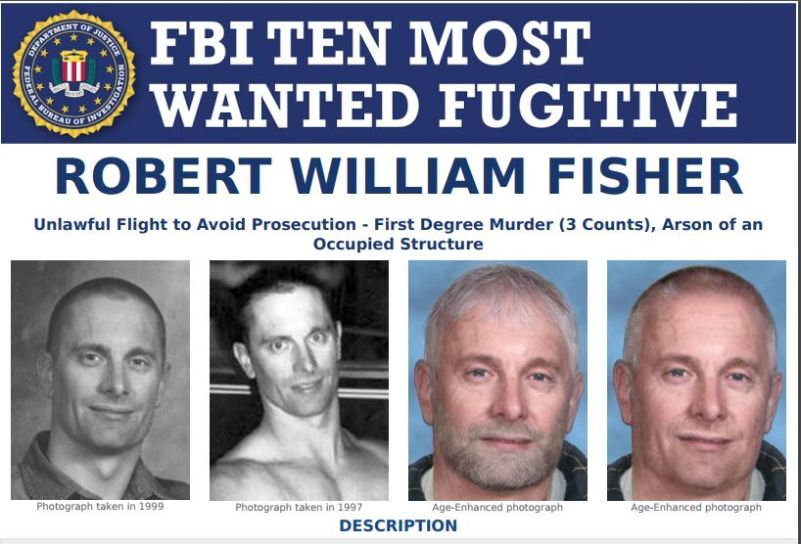 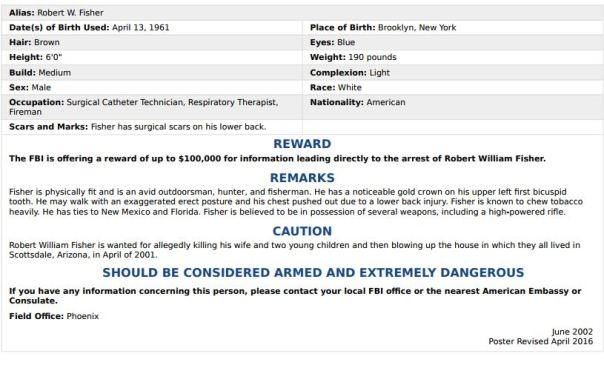