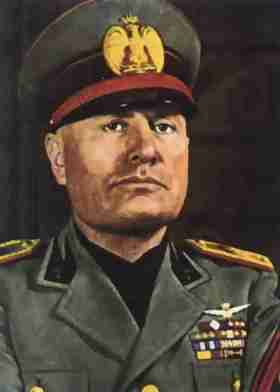 The dictator was killed along his  mistress  , Clara Petacci. Their bodies were taken to Milan from the Lecco district near Lake Como where they were arrested and killed.

According to the Times correspondent in Milan, the corpses of Mussolini, Petacci and 12 Fascists are on display in Piazzale Loreto “with ghastly promiscuity in the open square under the same fence against which one year ago 15 partisans had been shot by their own countrymen”.

One woman fired five shots into Mussolini’s body, according to Milan Radio, and shouted: “Five shots for my five assassinated sons!”

Other passers-by spat on the bodies

The executions are the first conspicuous demonstration of mob violence carried out by the partisans who until now have been kept under control by their leaders.

The partisan commander-in-chief General Raffaele Cadorna said such incidents were regrettable but desirable in this case as a way for the public to vent their anger against the former dictator and his cohorts.

Mussolini was spotted  heading towards Switzerland by an Italian customs guard at Dongo, near Lake Como. He was driving a car in a column of other German cars wearing a German greatcoat over his uniform.

Other members of his party were found in neighbouring villages.

It was in Milan that Mussolini founded Europe’s first fascist movement – Fasci di Combattimento – in 1919.

He came to power in 1922 after the so-called March on Rome.

By 1928 Mussolini was absolute dictator and took the title of Duce, leader, and embarked on an expansionist foreign policy taking Ethiopia in 1935 and annexing Albania in 1939. That same year Mussolini signed a Tripartite Pact with Adolf Hitler’s Germany and Imperial Japan.

After defeats in Greece, the Balkans, North Africa and Russia, Mussolini lost popularity. Then on 9 July 1943 the Allies landed in Sicily and Italy was faced with an invasion of its mainland.

Mussolini failed to secure assurances from Germany of adequate support against such an invasion and the Fascist Grand Council turned against him and had him arrested on 25 July.

Six weeks later the Germans launched a dramatic rescue of Mussolini. He was made head of the puppet republic of Salo – also known as the Italian Social Republic – once the Germans had occupied northern Italy in September 1943.

On 11 October 1943 the Badoglio government declared war on Germany