Gibraltar Brexit row: What is the dispute about?

A row over Gibraltar has broken out after the UK sent a letter formally triggering Brexit talks. But why have tensions risen over the Rock and why is it important?

Why is Gibraltar British?

Gibraltar, located at the bottom of Spain on the southern end of the Iberian Peninsula, was under the rule of the Moors – a group of Muslim inhabitants – from AD711 to 1462, like most of Spain.

Spain (initially Castile) controlled the territory from 1462 to 1704.

In 1704 it was seized by an Anglo-Dutch force from Spain before being ceded to Great Britain in 1713 and has remained a UK territory ever since.

What does Spain say… and Gibraltarians?

Spain believes Gibraltar was taken in the context of a Spanish dispute over who should inherit the crown.

The UK notes Gibraltar was ceded by Spain in the Treaty of Utrecht and points to the fact it has occupied the land for longer.

Both countries cite UN principles as supporting their claims.

Gibraltar – a territory with a population of 32,000 – believes it has the right of self determination – something Spain disputes.

Gibraltarians are British citizens and rejected by 99% to 1% the idea of the UK sharing sovereignty with Spain in a vote in 2002 and in a previous referendum in 1967.

Why is it important?

Although Gibraltar is small, it is strategically important because of its location, standing only 12 miles from the north coast of Africa.

The UK has a military base there, including a port and airstrip. It was an important naval base during World War Two.

Spain has accused Gibraltar of being a corporate tax haven, allowing companies and wealthy individuals to avoid paying millions. 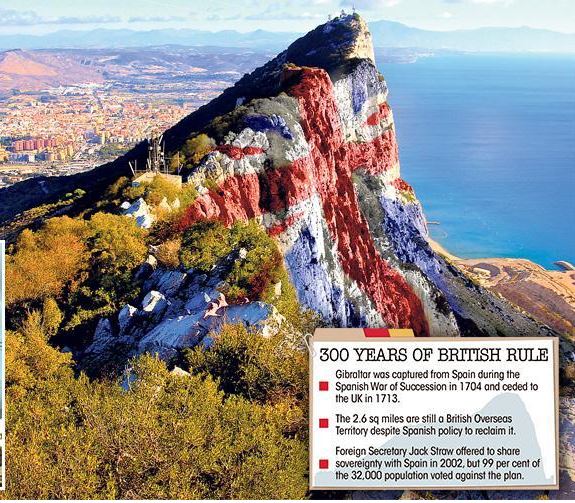 (There are 14 British Overseas Territories in the world including Bermuda and the Falkland Islands.)

2. Britain has 300 years of sovereignty over the Rock and almost all of its inhabitants want to remain with Britain.

3. Gibraltar is also part of the European Union because of its connection to the UK but is outside several of the economic associations (such as the customs union, the VAT area, and the Schengen Area).

5. It has the 5th highest density of any country or territory in the world.

6. English is the official language of Gibraltar but many people also speak Spanish and the local language, which is called Llanito and has a mix of Mediterranean words in it.

7. Gibraltarians consider themselves to be culturally British, rather than culturally Spanish.

8. When asked, at the referendum in 2002, whether Spain and the UK should share sovereignty of Gibraltar, more than 98% of Gibraltarians said it should remain British.

9. Gibraltar may have been the place where the Neanderthals died out. A study published in Nature in 2006 suggested they were living in a cave site on the south-east of Gibraltar up to 24,000 years ago (later than the 30,000 years previously thought). However, new carbon dating may be about to force archaeologists to rethink that.

10. Gibraltar is named in Arabic Jabal Tariq, after the Muslim commander Tariq Ibn-Ziyad. He turned ‘the rock’ into a fortress in 711 A.D, and it has been an important naval base for more than 1,000 years.

11. The straight of Gibraltar may be even more famous than the actual city itself! The body of water carries an immense historical importance in the world, that even holds weight in today’s society. Not only does the straight act as a passageway from the Mediterranean to the Atlantic Ocean, but its close proximity to Africa only magnifies the nine miles of water in between. 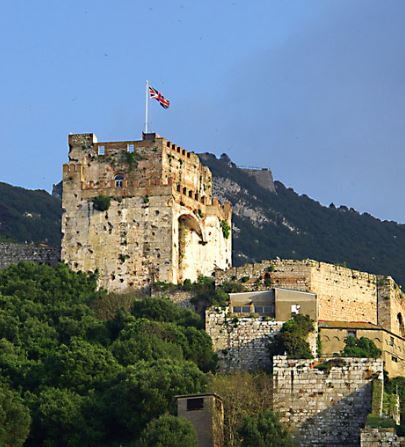 12. The Tower of Homage is all that remains of the Moorish Castle that dates back to the 11th The castle saw a lot of action, especially during the 16th Century (1540) when hundreds of people found safety inside the castle when Turkish pirates attacked Gibraltar.

13. A British flag has flown at The Tower of Homage ever since Admiral Rooke erected the first British flag here when he captured the Rock in 1704

14. The official currency of Gibraltar is the pound and you can spend notes and coins from the UK in the territory – but you can’t use the locally-produced notes or coins back in the UK.

15. Gibraltar has a very religiously diverse population. Spanish and British influence brought Catholicism and Protestantism to Gibraltar respectively. The territory’s proximity to Morocco accounts for the large Muslim population, and Gibraltar is also home to many Jews whose ancestors fled south following the Spanish Inquisition. There is also a small Hindu population and a Hindu temple.

16. Gibraltar has its own political system that makes many decisions within the territory but issues like defence and foreign affairs are determined by the UK Government in London.

17. There are thought to be about 230 Barbary macaques on the rock, the only wild population of the monkeys in Europe. Last year, more than 50 people were treated in hospital following attacks from the monkeys.

18. Brian Jones also had a run-in with the monkeys. In 1967, the Rolling Stones’ guitarist, accompanied by Anita Pallenberg and Marianne Faithfull – all on LSD – visited the colony in Gibraltar en route to meet the rest of the band in Morocco. According to Faithfull’s autobiography, Jones decided he wanted to play a tape of music he had made for a film starring Pallenberg to the monkeys. “We approached the troop of monkeys very ceremoniously,” she writes, “and told them we were going to play them some wonderful sounds. They listened to all this very attentively, but when Brian turned on the tape recorder, they didn’t seem to care for it. They seemed alarmed by it and scampered away shrieking. Brian got very upset. He took it personally. He became hysterical and started sobbing.”

19. Gibraltar uses the same timezone as Spain (not the UK) and the people drive on the right like in continental Europe (but not in the UK).

20. Gibraltar celebrates National Day on September 10th. Each year they release 30,000 red and white balloons – one for every citizen.

Gibraltar (/dʒɪˈbrɔːltər/ ji-BRAWL-tər, /dʒᵻˈbrɒltər/ jə-BROL-tər or other permutations; Spanish pronunciation: [xiβɾalˈtaɾ]) is a British Overseas Territory located on the southern end of the Iberian Peninsula.[7][8] It has an area of 6.7 km2 (2.6 sq mi) and shares its northern border with Spain. The Rock of Gibraltar is the major landmark of the region. At its foot is a densely populated city area, home to over 30,000 Gibraltarians and other nationalities.[9]

An Anglo-Dutch force captured Gibraltar from Spain in 1704 during the War of the Spanish Succession on behalf of the Habsburg claim to the Spanish throne. The territory was subsequently ceded to Great Britain “in perpetuity” under the Treaty of Utrecht in 1713. During World War II it was an important base for the Royal Navy as it controlled the entrance and exit to the Mediterranean Sea, which is only eight miles (13 km) wide at this naval “choke point” and remains strategically important so to this day with half the world’s seaborne trade passing through the strait.[10][11][12] Today Gibraltar’s economy is based largely on tourism, online gambling, financial services, and shipping.[13][14]

The sovereignty of Gibraltar is a major point of contention in Anglo-Spanish relations as Spain asserts a claim to the territory, despite recognising British sovereignty in several previous treaties.[14] Gibraltarians overwhelmingly rejected proposals for Spanish sovereignty in a 1967 referendum and again in 2002. Under the Gibraltar constitution of 2006, Gibraltar governs its own affairs, though some powers, such as defence and foreign relations, remain the responsibility of the British .