Marilyn Monroe (born Norma Jeane Mortenson; June 1, 1926 – August 5, 1962) was an American actress and model. Famous for playing “dumb blonde” characters, she became one of the most popular sex symbols of the 1950s, emblematic of the era’s attitudes towards sexuality. Although she was a top-billed actress for only a decade, her films grossed $200 million by the time of her unexpected death in 1962.

She continues to be considered a major popular culture icon.

Born and raised in Los Angeles, Monroe spent most of her childhood in foster homes and an orphanage and married for the first time at the age of sixteen. While working in a factory as part of the war effort in 1944, she met a photographer and began a successful pin-up modeling career. The work led to short-lived film contracts with Twentieth Century-Fox (1946–47) and Columbia Pictures (1948).

After a series of minor film roles, she signed a new contract with Fox in 1951. Over the next two years, she became a popular actress with roles in several comedies, including As Young as You Feel and Monkey Business, and in the dramas Clash by Night and Don’t Bother to Knock. Monroe faced a scandal when it was revealed that she had posed for nude photos before becoming a star, but rather than damaging her career, the story increased interest in her films.

By 1953, Monroe was one of the most bankable Hollywood stars, with leading roles in three films: the noir Niagara, which focused on her sex appeal, and the comedies Gentlemen Prefer Blondes and How to Marry a Millionaire, which established her star image as a “dumb blonde”. Although she played a significant role in the creation and management of her public image throughout her career, she was disappointed at being typecast and underpaid by the studio. She was briefly suspended in early 1954 for refusing a film project, but returned to star in one of the biggest box office successes of her career, The Seven Year Itch (1955).

When the studio was still reluctant to change her contract, Monroe founded a film production company in late 1954, Marilyn Monroe Productions (MMP). She dedicated 1955 to building her company and began studying method acting at the Actors Studio. In late 1955, Fox awarded her a new contract, which gave her more control and a larger salary. After a critically acclaimed performance in Bus Stop (1956) and acting in the first independent production of MMP, The Prince and the Showgirl (1957), she won a Golden Globe for Best Actress for Some Like It Hot (1959). Her last completed film was the drama The Misfits (1961).

Monroe’s troubled private life received much attention. She struggled with addiction, depression, and anxiety. She had two highly publicized marriages, to baseball player Joe DiMaggio and playwright Arthur Miller, which both ended in divorce. She died at the age of 36 from an overdose of barbiturates at her home in Los Angeles on August 5, 1962. Although the death was ruled a probable suicide, several conspiracy theories have been proposed in the decades following her death. 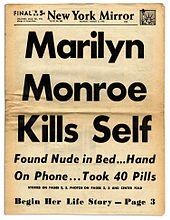 Front page of the New York Daily Mirror on August 6, 1962

Monroe was found dead in the bedroom of her Brentwood home by her psychiatrist, Dr. Ralph Greenson, in the early morning hours of August 5, 1962. Greenson had been called there by her housekeeper Eunice Murray, who was staying overnight and had awoken at 3:00 a.m. “sensing that something was wrong”. Murray had seen light from under Monroe’s bedroom door, but had not been able to get a response and found the door locked.

The death was officially confirmed by Monroe’s physician, Dr. Hyman Engelberg, who arrived at the house at around 3:50 a.m.

At 4:25 a.m., they notified the Los Angeles Police Department.

The Los Angeles County Coroners Office was assisted in their investigation by experts from the Los Angeles Suicide Prevention Team.  It was estimated that Monroe had died between 8:30 and 10:30 p.m., and the toxicological analysis concluded that the cause of death was acute barbiturate poisoning, as she had 8 mg% of chloral hydrate and 4.5 mg% of pentobarbital (Nembutal) in her blood, and a further 13 mg% of pentobarbital in her liver.

Empty bottles containing these medicines were found next to her bed. The possibility of Monroe having accidentally overdosed was ruled out as the dosages found in her body were several times over the lethal limit. Her doctors and psychiatrists stated that she had been prone to “severe fears and frequent depressions” with “abrupt and unpredictable” mood changes, and had overdosed several times in the past, possibly intentionally.

Due to these facts and the lack of any indication of foul play, her death was classified a probable suicide.

Monroe’s unexpected death was front-page news in the United States and Europe. According to Lois Banner, “it’s said that the suicide rate in Los Angeles doubled the month after she died; the circulation rate of most newspapers expanded that month”,  and the Chicago Tribune reported that they had received hundreds of phone calls from members of the public requesting information about her death.

French artist Jean Cocteau commented that her death “should serve as a terrible lesson to all those, whose chief occupation consists of spying on and tormenting film stars”, her former co-star Laurence Olivier deemed her “the complete victim of ballyhoo and sensation”, and Bus Stop director Joshua Logan stated that she was “one of the most unappreciated people in the world”.

Her funeral, held at the Westwood Village Memorial Park Cemetery on August 8, was private and attended by only her closest associates.. It was arranged by Joe DiMaggio and her business manager Inez Melson.  Hundreds of spectators crowded the streets around the cemetery.

Monroe was later interred at crypt No. 24 at the Corridor of Memories.

Several conspiracy theories about Monroe’s death have been proposed in the decades afterwards, including murder and accidental overdose. The murder speculations first gained mainstream attention with the publication of Norman Mailer‘s Marilyn: A Biography in 1973, and in the following years became widespread enough for the Los Angeles County District Attorney John Van de Kamp to conduct a “threshold investigation” in 1982 to see whether a criminal investigation should be opened.

No evidence of foul play was found.