The Claudy bombing occurred on 31 July 1972, when three car bombs exploded mid-morning on the Main Street of Claudy in County Londonderry, Northern Ireland. The attack killed nine civilians, and became known as “Bloody Monday”.[1] Those who planted the bombs had attempted to send a warning before the explosions took place. The warning was delayed, however, because the telephones were out of order due to an earlier bomb attack.[2] The Provisional Irish Republican Army (IRA) issued an immediate denial of responsibility,[2][3] and later claimed that “an internal court of inquiry” had found that its local unit did not carry out the attack.[4]

On 24 August 2010, following an eight-year investigation, the Police Ombudsman for Northern Ireland published a report into the bombing, which stated that the Royal Ulster Constabulary believed in the early 1970s that Father James Chesney, a local Roman Catholic priest, was the IRA’s quartermaster and Director of Operations of the South Derry Brigade.[5] The report found that the possibility of his involvement in activities including the Claudy bombing was covered up by senior police officers, government ministers and the Roman Catholic hierarchy.[6]

On the 40th anniversary of the bombing, former Provisional IRA leader Martin McGuinness described the events of that day as “appalling and indefensible” and “inflicted on totally innocent people”[7]

On 31 July 1972 at about 4:00 am,[8] the British Army had begun Operation Motorman. This was an operation to regain control of the “no-go areas” (areas controlled by Irish republican paramilitaries) that had been established in Belfast[9] and Derry. The bombing of Claudy may have been a response to this operation.[2]

Shortly before 10:00 am, three car bombs were placed in the centre of the village, which was busy with shoppers at the time. Initial police investigations found that a car was seen travelling from Claudy at 10:00. It had stopped at the nearby village of Feeny, where a passenger tried to use the public telephone box, which was out-of-order. The car then travelled to Dungiven where it stopped on the Main Street. Two men got out and went into separate shops to use the telephones, which were also out of order following a bomb attack at the local telephone exchange. The men then asked the shop assistants to tell the police at Dungiven that there were three bombs in Claudy, but by this time the first bomb had already detonated.[10]

The first bomb, hidden inside a stolen Ford Cortina, exploded at 10:15 outside McElhinney’s bar and store on Main Street.[10] Six people were killed by this bomb; among the dead were an eight-year-old girl and a 15-year-old boy.[11] A second bomb, hidden inside a stolen Morris Mini Van parked outside the post office on Main Street,[10] was spotted by a police officer, who then began directing people away from the area towards Church Street. At 10:30, a bomb hidden inside a stolen Mini Van detonated outside the Beaufort Hotel on Church Street.[10] The bomb outside the post office exploded almost simultaneously, killing three people, including a 16-year-old boy injured in the first blast.[11]

Elizabeth was serving petrol at a pump outside McElhinney’s pub on Main Street when the first car bomb exploded nearby.

The 59-year-old nurse was killed instantly.

Joseph, 39, was also killed instantly in the first explosion.

A father of seven, he had taken his four-year-old son into the village to buy a newspaper.

His son survived the explosion

Eight-year-old Kathryn was cleaning the windows of her family’s shop when the first bomb went off. She died instantly.

Her mother, Merle, saw a bomber leave what would be the second bomb beside their shop, not knowing what horror it would bring to her family.

“When he stepped out of that car, he saw Kathryn standing at that window,” she said.

“He should have shouted at her. But he didn’t, he just walked away.”

Rose was injured in the first explosion. The 52-year-old mother of eight died three days later on 3 August.

She owned a shop on Main Street and was hit by shrapnel while talking to a customer.

Fifteen-year-old Patrick, who was in Rose McLaughlin’s shop, was injured by flying metal from the first explosion.

He was flown to Altnagelvin Hospital in Londonderry, but died eight days later on 8 August.

Arthur was the final person to die as a result of the first bomb. The 38-year-old father of two died from his injuries on 13 August.

A keen musician who worked in Londonderry, he had stayed at home that day.

He was hit by shrapnel as he stood in Elizabeth McElhinney’s shop.

David died when the third bomb outside the Beaufort Hotel exploded. He was 60-years-old.

He had helped the injured after the first explosion, but when the second device was discovered by police he, along with many others, was directed into the path of the third explosion.

Sixty-five-year-old James was also instantly killed as the third bomb exploded. He too had been helping the injured aftert he first explosion

William, 16, had travelled to Claudy from Donemana in County Tyrone. He was a milkman’s helper and his round included the village.

He had been injured by the first explosion, but was killed instantly in the third.

The Derry Brigade of the Provisional Irish Republican Army denied involvement at the time of the attack.[2] Derry politician Ivan Cooper (of the Social Democratic and Labour Party), however, claimed in 2002 that the IRA and Father James Chesney (a Catholic priest from the nearby parish of Desertmartin) were involved in the attack. Cooper stated:

Within a couple of days, a man lurked like a scared rabbit outside one of my constituency offices. He told me the IRA was behind the bomb and I had every reason to believe him. He gave no names and I asked no names. That is the way it was then. It was dangerous to know too much. But several months later, I became aware of the identities and I have absolutely no doubt that Father Jim Chesney was involved.[2]

The type and colour of car used by those who gave the bomb warning were rare in Northern Ireland at that time. In the first week of August 1972, the RUC arrested a suspect (called “Man A”) who owned a similar car. He provided an alibi, however, that he had been at Chesney’s home in Bellaghy at the time. Chesney and another person corroborated the man’s alibi and he was released after being questioned. According to the Ombudsman’s report, when Chesney was stopped at a police checkpoint in September 1972, a sniffer dog found traces of explosives in his car. The police officers involved in the original police investigation suspected the following:

In October 1972, police intelligence alleged that Chesney had formed an “independent group of the IRA”.

Some time after the bombing, Chesney was questioned by the then Bishop of Derry Neil Farren, and later again by Farren’s successor Bishop Edward Daly. At both times, Chesney denied any involvement. Chesney served in the parish of Cullion from July 1972 until November 1972. He was then hospitalised and spent a period of recovery in County Donegal. In December 1973, he was transferred to the parish of Convoy in County Donegal. Although he often crossed the border into Northern Ireland, he was never arrested and never faced a police interview.

A 2004 loyalist mural on Lower Newtownards Road in Belfast making reference to the bombing. It shows a priest wearing a balaclava and holding a bomb.

No person was arrested for the bombings at the time, but following calls for a new inquiry, a fresh investigation was started by the Police Service of Northern Ireland (PSNI) in 2002. As part of the investigation, the police uncovered documents showing that the then Secretary of State for Northern Ireland Willie Whitelaw discussed Chesney’s involvement with Cardinal William Conway. The actions of two other Catholic priests, Patrick Fell and John Burns, were also examined.[13]

On 30 November 2005, the PSNI detained four people in connection with the bombing.[14] They were, however, released without charge the next day and denied involvement.[15] Among those arrested was the then Sinn Féin MLA Francie Brolly,[16] who subsequently secured an out-of-court settlement in a legal action against the police.

On 24 August 2010, the Police Ombudsman for Northern Ireland published a report into the bombing which concluded that the British government and the Roman Catholic Church had conspired to cover up Chesney’s alleged involvement.[17] The report stated:

The arrest of a priest in connection with such an emotive atrocity at a time when sectarian killings in Northern Ireland were out of control and the province stood on the brink of civil war was feared, by senior politicians, as likely to destabilise the security situation even further. A deal was therefore arranged behind closed doors to remove Fr Chesney from the province without provoking sectarian fury.[17]

According to the report by Al Hutchinson, the Police Ombudsman,

The RUC’s decision to ask the government to resolve the matter with the Church and then accept the outcome, was wrong. The decision failed those who were murdered, injured and bereaved in the bombing. The police officers who were working on the investigation were also undermined. I accept that 1972 was one of the worst years of the Troubles and that the arrest of a priest might well have aggravated the security situation. Equally, I consider that the police failure to investigate someone they suspected of involvement in acts of terrorism could, in itself, have had serious consequences.[18]

The report found the following: 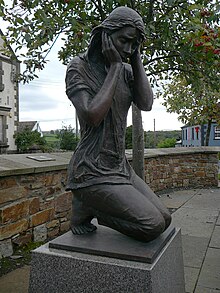 A memorial to those killed and injured by the bombing was erected on Claudy’s Main Street in 2000, consisting of a bronze figure of a kneeling girl, created by sculptor Elizabeth McLaughlin, mounted on a stone plinth. A number of plaques commemorating the victims are affixed to the wall enclosing the statue.[19] The statue was damaged on 20 October 2006 when vandals knocked it from the plinth.[20

Major Events in the Troubles