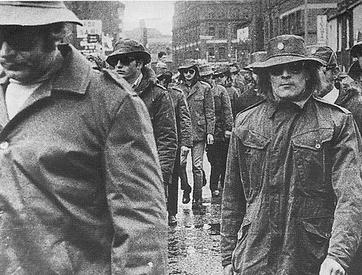 [This is seen as a response to the continuation of Republican ‘no-go’ areas and fears about concessions to the Irish Republican Army (IRA).]

The Grundig company announced that its factory in Belfast would close with the loss of 1,000 jobs.

The British government issued a statement on prison policy in Northern Ireland. The government said that it would not grant special category status and would retain control of the prisons.

John Stalker, then Deputy Chief Constable of the Greater Manchester Police, was suspended from duty while an investigation was conducted into allegations of misconduct.

[Stalker had been removed on 5 June 1986 from the investigation into the allegations of a ‘shoot to kill’ policy by security forces. Stalker was cleared of the allegations of misconduct and reinstated to his post on 22 August 1986.]

Two members of the Royal Ulster Constabulary (RUC) were shot dead in Belfast by the Irish Republican Army (IRA).

Further meetings were held in London as part of the political talks (later known as the Brooke / Mayhew talks).

The British government announced that almost 40 prisoners would be transferred from prisons in England to prisons in Northern Ireland.

The Irish News (a Belfast based newspaper) reported that in 12 of the 26 District Councils the posts of mayor and deputy mayor were being shared between Nationalist and Unionist parties.

The Royal Ulster Constabulary (RUC) rerouted a parade from passing through the lower Ormeau Road.

The British government announced the setting up of a trauma unit in Belfast to help young people and families affected by the conflict in Northern Ireland.

Adam Ingram, then Security Minsiter, who had recently been given the ‘minister for victims’ portfolio made the announcement and said that a package of £700,000 had been allocated to the unit.

The “absolute deadline” set by Tony Blair, then British Prime Minister, passed without the establishment of the Executive.

The Prime Minister agreed to an extension. Sinn Féin published a document entitled ‘Breaking the impasse: A Sinn Féin declaration’.