Remembering all our brave  and women, past and present  who have fought and died for our freedom.

We salute you all!

In Flanders Fields by John McCrae

Plans for a Veterans’ Day were announced in February 2006 by then-Chancellor of the Exchequer, Gordon Brown, who said the aim was to ensure the contribution of veterans was never forgotten. The day is marked across the UK by local ceremonies and the presentation of medals to living ex-servicemen and women. The date of 27 June was chosen as it came the day after the anniversary of the first investiture of the Victoria Cross, in Hyde Park, London in 1857.

Veterans Day was created as a permanent extension of Veterans’ Awareness Week first held in 2005. Armed Forces Day generally focuses on celebrating living current/ex servicemen & women, whereas Remembrance Day focuses on honouring the dead. Although it used to be called Veteran’s Day in the UK, it is not the same as the United States’ Veterans Day which is more similar to Remembrance Day in the Commonwealth.

On 25 June 2007, Jim Devine the Member of Parliament for Livingston, tabled a House of Commons Early Day Motion calling for the day to be a public holiday, stating “that this House recognises the outstanding contribution that veterans have made to the country; and believes that Veterans’ Day should be a national public holiday across the United Kingdom.”

The first Veterans’ Day in 2006 saw a series of events across the UK which included an event at the Imperial War Museum in London, which was attended by Lachhiman Gurung VC, a Nepalese recipient of the Victoria Cross, which was awarded for bravery in 1945 when he was a Rifleman in the 4th Battalion of The 8th Gurkha Rifles, British Indian Army during World War II in Burma (Myanmar), and Corporal Christopher Finney GC of the Blues and Royals who was awarded the George Cross for bravery under friendly fire during the 2003 invasion of Iraq. Parades were held in Dundee and Staffordshire as well as a service at Westminster Abbey. There was also an evening reception at 10 Downing Street for representatives of veterans associations.

The 2007 national event was held in Birmingham as the start of a five-day event from 27 June to 1 July. In the morning there was a “Parade of Standards” which was led by The Central Band of the Royal Air Force, from the International Convention Centre (ICC) to the Hall of Memory in Centenary Square. The day also included celebrations in Victoria Square where a Spitfire aircraft was on display and the Minister for Veterans Derek Twigg presented five Veterans’ Badges and met the families of service personnel who died in the line of duty.

For the 2008 Veterans’ Day, the national event was hosted in Blackpool as part of the resorts annual “National Veterans’ Week” which ran from 21 to 29 June 2008.

Events were held throughout the UK and the day was promoted by a nationwide television advert. The National Veterans’ Day Service was held at Blackpool Cenotaph, a Grade II Listed building which had just been restored, by North Pier on central promenade. The service was led by the Bishop of Blackburn and was attended by Camilla, Duchess of Cornwall, Derek Twigg and General Sir Richard Dannatt, the Chief of the General Staff, as well as Henry Allingham (at the time, he was the oldest surviving veteran of World War I). The service was followed by a “Schools Veterans’ Day Thank You” performed by local school children,

Various other events were held throughout Blackpool during the day including a “Badge Presentation ceremony” in the Tower Ballroom with the Duchess of Cornwall presenting veteran badges to among others, Martin Bell.

There was also a Veterans’ Parade along the promenade  and a Falklands War veteran abseiled down Blackpool Tower.

The weekly BBC Radio 2 programme, Friday Night is Music Night was broadcast live from the Opera House presented by Ken Bruce with the BBC Concert Orchestra, Alfie Boe and Rebecca Thornhill.  The Red Devils parachute display team performed an illuminated “night time parachute drop” outside North Pier[13] and the day ended with a Firework Finale from the pier.

Other events included a commemoration at Trafalgar Square in London.

In 2009 the name of the event was changed to Armed Forces Day, to raise awareness and appreciation for those on active duty. It took place on Saturday 27 June.The host town was Chatham, Kent with events elsewhere, including London.

In 2010, Armed Forces Day was held on Saturday 26 June hosted in the Welsh capital of Cardiff.

The day-long celebrations included a military parade from Cardiff Castle to Cardiff Bay and the city’s waterfront, where a range of events, activities and artistic performances were staged on land, sea and air. The parade was led by HRH the Prince of Wales and the Duchess of Cornwall. Royal Navy frigate HMS Kent was docked in Cardiff to take part in the events. An estimated 50,000 people attended the celebrations in the city.

Armed Forces Day 2011 took place on Saturday 25 June, with the main parade held on the Royal Mile in the Scottish capital of Edinburgh, which was this year’s host city. The personnel of the Royal Navy, British Army and Royal Air Force took the salute from Prince Charles, at the Scottish Parliament, in the presence of dignitaries, including the Prime Minister, the Foreign Secretary, the Defence Secretary, the First Minister of Scotland, and the Chief of the Defence Staff. Over Edinburgh there was a fly-past by the Battle of Britain Memorial Flight and the Red Arrows. HMS Portland, a Royal Navy frigate, was moored at Leith, Edinburgh’s port, for public tours.

In Windsor, Berkshire, at the Victoria Barracks, the Irish Guards were awarded their Afghan operational medals by Prince William – who is their ceremonial Colonel of the Regiment – and Catherine, Duchess of Cambridge.

Further events and parades were held across the United Kingdom.

At the Royal Navy’s base in Portsmouth, a number of public events took place over the weekend, and Royal Navy destroyers HMS Gloucester and HMS Daring were docked and available to the public.

UK Armed Forces Day 2012 was centred on Plymouth and took place on Saturday 30 June. Similar events were held throughout the United Kingdom.

UK Armed Forces Day 2013 was centred on Nottingham and took place on Saturday 29 June. Over 300 similar events were held throughout the United Kingdom.

UK Armed Forces Day 2014 was centred on Stirling and took place on Saturday 28 June. Hundreds of similar events were held throughout the United Kingdom.

UK Armed Forces Day 2015 was centred on Guildford on Saturday 27 June. Hundreds of similar local events were held throughout the United Kingdom. 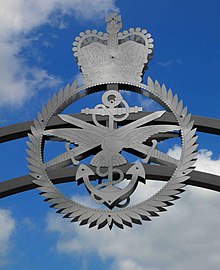 UK Armed Forces Day 2016 will be centred on the Lincolnshire resort of Cleethorpes on Saturday 25 June,  with some activities on 26 June being hosted in Grimsby Docks.