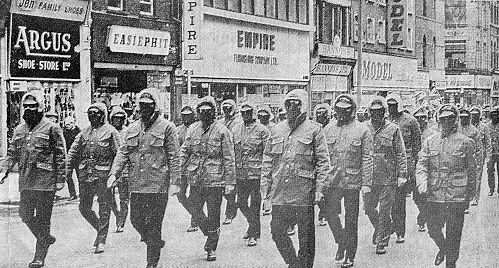 [Many factories managed to stay open although the port at Larne, County Antrim, was closed. Intimidation, or ‘persuasion’ as the Loyalist paramilitaries preferred to call it, was used as in 1974 to try to stop people from going to work.

Despite this the majority of the Harland and Wolff shipyard workers voted against the strike. The strike was also criticised by the Ulster Unionist Party (UUP), Ulster Vanguard, and the Orange Order. During the first three days of the strike the Royal Ulster Constabulary (RUC) reported that it had removed 300 road blocks, arrested 23 people, and received 1,000 complaints of intimidation.

In calling the strike the UUAC were copying the tactics of the Ulster Workers Council strike in May 1974 and were obviously hoping for similar success. However many of the conditions were different from 1974. There was not the same anxiety among the Protest population that Britain was about to withdraw from Northern Ireland and this had the effect of reducing support for the strike. In particular those organising the strike were unable to secure the support of key groups of workers.

Chief amongst these were the workers at Ballylumford power station who, although brought under great pressure, refused on a number of occasions to support the strike. The other major factor was that the British government had learnt some lessons from the 1974 strike and were more prepared for the tactics of the strikers.]

The Conservative Party won the general election and Margaret Thatcher became Prime Minister. Humphrey Atkins was appointed as Secretary of State for Northern Ireland. In Northern Ireland the turnout was 68.4 per cent and the Democratic Unionist Party (DUP) led by Ian Paisley gained two seats from the Ulster Unionist Party (UUP).

Paddy Power, then Irish Defence Minister, criticised Britain over the sinking of the Argentinean ship the Belgrano during the Falklands War.

John Major, then British Prime Minister, paid a visit to Derry. Sinn Féin (SF) supporters held a protest at the visit. There were a number of disturbances as 100 people rioted.

Tony Blair, then British Prime Minister, appointed Marjorie (Mo) Mowlam as the new Secretary of State for Northern Ireland. Mowlam travelled to Belfast and visited shoppers in the centre of the city. Mowlam said that she was keen to implement a number of ‘confidence building measures’ such as employment equality, reform of the Royal Ulster Constabulary (RUC), and the recommendations of the The North Report on parades and marches.

She also said that Sinn Féin (SF) could enter the talks process when there was a renewed Irish Republican Army (IRA) ceasefire. [SF later responded to the comments of Mowlam by saying that they were “ready to do business with the British government”.] [In terms of the peace process the election of a Labour government with a large working majority was to provide new momentum in the search for a political settlement to the conflict.]

A 27 year-old Catholic man was badly beaten in a sectarian attack carried out by a crowd of Loyalists in Lurgan, County Armagh.

A 24 year-old Catholic man was beaten in a separate sectarian attack in Lurgan.

It was reported in the media that David Trimble, then leader of the Ulster Unionist Party (UUP), had been involved with secret talks with senior members of the Orange Order from Portadown about the Drumcree parade dispute.

Martin McGuinness, then Vice-President of Sinn Féin (SF), formally confirmed that he had been the “second-in-command” of the Irish Republican Army (IRA) in Derry when the events of ‘Bloody Sunday’ took place on 30 January 1972. The statement was made in advance of his expected appearance at the Bloody Sunday Inquiry.

Killed by: Irish Republican Army (IRA)
Died one day after being shot by sniper while on British Army (BA) foot patrol, junction of Foyle Road and Bishop Street, Derry.

Killed by: Irish Republican Army (IRA)
Shot at his home, Leitrim, near Castlewellan, County Down.