The 36th (Ulster) Division was a division of Lord Kitchener‘s New Army formed in September 1914. Originally called the Ulster Division, it was made up of members of the Ulster Volunteer Force, who formed thirteen additional battalions for three existing regiments: the Royal Irish Fusiliers, the Royal Irish Rifles and the Royal Inniskilling Fusiliers. The division served on the Western Front as a formation of the British Army during World War I.

The division’s insignia was the Red Hand of Ulster.

The Ulster Volunteers were a unionist militia founded in 1912 to block Home Rule for Ireland. In 1913 they organised themselves into the Ulster Volunteer Force to give armed resistance to the prospective Third Home Rule Act (enacted in 1914). With a rival Irish Volunteers being formed by nationalists in response, outright civil war in Ireland seemed possible. However, the outbreak of World War I intervened: the Act was put in abeyance until after what was expected to be a short war.

The 36th Division was commanded by Major-General Oliver Nugent from 1915 to 1918. The 36th was one of the few divisions to make significant gains on the first day on the Somme. It attacked between the Ancre and Thiepval against a position known as the Schwaben Redoubt. According to military historian Martin Middlebrook:

The leading battalions (of the 36th (Ulster) Division) had been ordered out from the wood just before 7.30am and laid down near the German trenches … At zero hour the British barrage lifted. Bugles blew the “Advance”. Up sprang the Ulstermen and, without forming up in the waves adopted by other divisions, they rushed the German front line ….. By a combination of sensible tactics and Ulster dash, the prize that eluded so many, the capture of a long section of the German front line, had been accomplished.[1]

During the Battle of the Somme the Ulster Division was the only division of X Corps to have achieved its objectives on the opening day of the battle. This came at a heavy price, with the division suffering in two days of fighting 5,500 officers and enlisted men killed, wounded or missing.[2] War correspondent Philip Gibbs said of the Division, “Their attack was one of the finest displays of human courage in the world.[3]

Of nine Victoria Crosses given to British forces in the battle, four were awarded to 36th Division soldiers.[3]

An arch in the Shankill Road area of Belfast commemorating the 36th Ulster Division.

“I am not an Ulsterman but yesterday, the 1st July, as I followed their amazing attack, I felt that I would rather be an Ulsterman than anything else in the world.”

Captain Wilfred Spender after the Battle of the Somme

The Somme From Defeat to Victory

Thiepval, as a battle memorial, commemorates the 1916 Anglo-French offensive on the Somme. It pays tribute and respect for those who died where it stands (90% of commemorations 1 July – 13 November 1916) and is the biggest British war memorial to the missing of The Western Front, both in physical size and the numbers it commemorates (more than 73,000). It was built in the late 1920s to early 1930s.

The 36th Ulster Division’s sector of the Somme lay astride the marshy valley of the river Ancre and the higher ground south of the river. Their task was to cross the ridge and take the German second line near Grandcourt. In their path lay not only the German front line, but just beyond it, the intermediate line within which was the Schwaben Redoubt.

To their left flank was the 29th Division, which included the Newfoundlanders. For them in less than half an hour it was all over; 801 men went into action and on the unwounded name call next day, only 68 answered.

To their right flank was the 32nd Division, including the Grimsby Chums. Prior to the attack at 07:28 a large mine was exploded beneath the German line; the Chums would then attack at 07:30. Unknown to them, the mine was short of the German position. During the 2-minute gap between explosion and whistle, the Germans set up their machine guns, probably in the new bunker which would give them a second defense. The attack did not last long; their task was to take the fortress village of Thiepval.

The First Day of the Somme was the anniversary (Julian Calendar) of the Battle of the Boyne, a fact remarked on by the leaders of the Division. Stories that some men went over the top wearing orange sashes are, however,sometimes thought to be myths.[4]

“There was many who went over the top at the Somme who were Ulstermen, at least one, Sergeant Samuel Kelly of 9th Inniskillings wearing his Ulster Sash, while others wore orange ribbons”[5]

When some of his men wavered, one Company commander from the West Belfasts, Maj. George Gaffikin, took off his Orange Sash, held it high for his men to see and roared the traditional war-cry of the battle of the Boyne; ” Come on, boys! No surrender!” [6]

On 1 July, following the preliminary bombardment, the Ulstermen quickly took the German front line. But intelligence was so poor that, with the rest of the division attacking under creep bombardment (artillery fired in front or over men; they advance as it moves), the Ulstermen would have come under attack from their own bombardment at the German first line.

But they still advanced, moving to the crest so rapidly that the Germans had no time to come up from their dugouts (generally 30–40 feet below ground). In the Schwaben Redoubt, which was also taken, so successful was the advance that by 10:00 some had reached the German second line. But again they came under their own barrage, not due to finish until 10:10. However, this successful penetration had to be given up before nightfall, as it was unmatched by those at its flanks. The Ulstermen were exposed in a narrow salient, open to attack on three sides. They were running out of ammunition and supplies, and a full German counter-attack at 22:00 forced them to withdraw, giving up virtually all they gained.

The Ulstermen had gained an advantage on the day of battle by not sticking to the rigid orders issued. Both the German and British generals considered the men of the New Army/Kitcheners Men as insufficiently trained in the skills of warfare. Consequently, the battle tactics they were ordered to follow by commanders was more strict and regimented than those of regular army. But the Ulstermen advanced during the bombardment by pushing forward small trenches the depth of a man, then cutting the barbed wire which was 30 inches in depth and height in places (before bombardment). So when the bombardment stopped at 07:28/07:30 the Ulstermen attacked quickly. These Ulstermen were also here by choice. Kitchener asked Sir Edward Carson for some of the already armed men of the Ulster Division. He hoped for a Brigade (4x battalions), he got in Volunteers, a Division (3x Brigade).[7] Thiepval was not to fall until late September; the Schwaben Redoubt fell in mid-October. The battle ended in mid-November. The Allies advanced 8 km and the British suffered 420,000 casualties, the French 195,000, and the Germans 650,000. The only success was relieving the French at Verdun. On the first day of battle, the British suffered 57,740 casualties, of which 19,240 were dead (the largest single loss). 60% of the officers involved were killed.

The Ulster Memorial Tower was unveiled by Field-Marshal Sir Henry Wilson in Thiepval, France, on 19 November 1921, in dedication to the contributions of the 36th Ulster Division during World War I.[2] The tower marks the site of the Schwaben redoubt, against which the Ulster Division advanced on the first day of the Battle of the Somme.[2]

Lord Carson had intended to perform the unveiling himself, but due to illness, his place was taken by Field Marshal Sir Henry Wilson. The money was raised by public subscription in Northern Ireland in memory of the officers and men of the 36th (Ulster) Division, and all Ulsterman who died in the great war.[8]

The tower itself is a replica of Helen’s Tower at Clandeboye, County Down. It was at Helen’s Tower that the men of the then newly formed Ulster Division drilled and trained on the outbreak of World War I.[2] For many of the men of the 36th (Ulster) Division, the distinctive sight of Helen’s Tower rising above the surrounding countryside was one of their last abiding memories of home before their departure for England and, subsequently, the Western Front.[2] 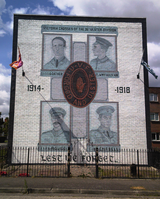 In total, nine members of the 36th Division were awarded the Victoria Cross:[9]

Captain Wilfred Spender of the Ulster Division’s HQ staff after the Battle of the Somme was quoted in the press as saying, “I am not an Ulsterman but yesterday, the 1st. July, as I followed their amazing attack, I felt that I would rather be an Ulsterman than anything else in the world. My pen cannot describe adequately the hundreds of heroic acts that I witnessed… The Ulster Volunteer Force, from which the division was made, has won a name which equals any in history. Their devotion deserves the gratitude of the British Empire.”[10] The final sentences of Captain Wilfred Spender’s account furthered his viewpoint:[11]

After the war had ended, King George V paid tribute to the 36th Division saying, “I recall the deeds of the 36th (Ulster) Division, which have more than fulfilled the high opinion formed by me on inspecting that force on the eve of its departure for the front. Throughout the long years of struggle, which now so gloriously ended, the men of Ulster have proved how nobly they fight and die …”.[2]

“The record of the Thirty-Sixth Division will ever be the pride of Ulster. At Theipval in the battle of the Somme on July 1st 1916; at Wytschaete on June 17th,1917, in the storming of the Messines Ridge; on the Canal du Nord, in the attack on the Hindenburg Line of November 20th same year; on March 21, 1918, near Fontaine-les-Clercs, defending their positions long after they were isolated and surrounded by the enemy; and later in the month at Andechy in the days of ‘backs to the wall’, they acquired a repution for conduct and devotion deathless in military history of the United Kingdom, and repeatedly signalised in the despatches of the Commander-in-Chief.”

North of Theipval the Ulster Division broke through the enemy trenches, passed the crest of the ridge, and reached the point called the Crucifix, in rear of the first German position. For a little while they held the strong Schwaben Rebout (where), enfiled on three sides, they went on through successive German lines, and only a remnant came back to tell the tale. Nothing finer was done in the war. The splendid troops drawn from those Volunteers who had banded themselves together for another cause, now shed their blood like water for the liberty of the world.”

Whether town dweller or country lad, volunteer or regular, officer or other rank, Catholic or Protestant, the Sons of Ulster knew a comradship and a trust in adversity that should be a lesson to us all.

On 29 August 1917, the 8th and 9th battalions of the Royal Irish Rifles amalgamated to form the 8/9th Battalion, which disbanded on 7 February 1918.

Between 6 November 1915 to 7 February 1916 the brigade swapped with the 12th Brigade from the 4th Division.

In August 1917 the 11th and 13th battalions of the Royal Irish Rifles amalgamated to form the 11/13th Battalion, which disbanded in February 1918. 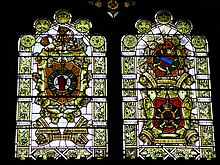