Brian Nelson (30 September 1947 – 11 April 2003) was an Ulster loyalist during The Troubles in Northern Ireland. He was simultaneously an informant for the British Army‘s Intelligence Corps and the intelligence chief of the Ulster Defence Association (UDA), a terrorist organisation.

The views and opinions expressed in this documentary/ies and page are soley intended to educate and provide background information to those interested in the Troubles of Northern Ireland.

Nelson, a Protestant from the Shankill Road, Belfast, served with the Black Watch regiment before joining the Ulster Defence Association in the early 1970s, where he was a low-level informant for the Royal Ulster Constabulary (RUC).

In 1974 he was jailed for seven years for the kidnap and torture of a Catholic man, Gerald Higgins, who died several weeks later from his injuries. Nelson served three years. After his release, Nelson resigned from the UDA and left for a construction job in West Germany. In 1985, however, the Intelligence Corps asked Nelson to rejoin and infiltrate the UDA. He rose to become the UDA’s senior intelligence officer while receiving assistance from his handlers. In one instance, IC operatives allegedly organised, streamlined and returned to Nelson a suitcase full of disorganised UDA intelligence.

In the early 1990s, following the shooting death of Loughlin Maginn, John Stevens was named to investigate allegations of collusion between loyalist paramilitaries and the Royal Ulster Constabulary (RUC). Stevens was able to use advanced fingerprint technology, then unavailable to the RUC. The Inquiry team uncovered Nelson’s fingerprints on some security force documents. The team began an investigation that, despite the obstructions encountered, would lead to Nelson’s arrest.

When the Stevens Inquiry Team arrested and interrogated Nelson, he claimed that he had been acting on behalf on the British government. Stevens spoke to John Deverell, head of MI5 in Belfast, who confirmed that Nelson had worked for Army Intelligence and not the RUC. Sharp disagreements developed between the two security branches as the extent of Nelson’s illegal activities within the Force Research Unit (FRU) was uncovered.

Over a period of two months, Nelson dictated a police statement covering 650 pages. He claimed that he had been tasked by the British Army to make the UDA a more effective killing machine. Using information that should have been confidential to his handlers he produced dossiers or “Intelligence Packages” including backgrounds, addresses, photos and movements on proposed targets, which were passed on to UDA assassins.[6]

Nelson had a blue card index system whereby he would pick out information on individuals from the mass of information reaching him. The selection of names for the index was Nelson’s alone and Stevens concluded that Nelson was actually choosing the people who were going to be shot. Nelson passed on the names of only ten people to his FRU handlers, claiming he could not remember the others.

Those ten were never targeted. Four others, including solicitor Pat Finucane, were all shot dead. In Stevens’ words “the FRU had been inexcusably careless in failing to protect the four who lost their lives”. Nelson handed out his blue cards, between twenty and fifty at a time, to members of the Ulster Volunteer Force. The FRU had no agents within the UVF and these targeted people were consequently unprotected. Many loyalists never bothered to destroy their blue cards, however, and the Stevens team was able to obtain fingerprint evidence. 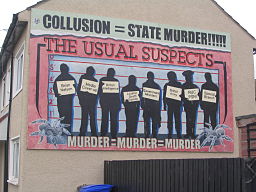 Brian Nelson represented as a silhouette holding a placard in a Belfast mural (February 2006).

At his trial in 1992,  the prosecution alleged that he failed to alert his handlers to all the assassination plans of which he was aware.  Gordon Kerr (“Colonel J”), a senior officer, who was later investigated himself, testified on Nelson’s behalf.

Nelson claimed that, in 1989, he had warned his handlers of UDA plans to murder solicitor Pat Finucane, who had been successfully representing IRA suspects in court. According to Nelson, Finucane was given no warning and was fatally shot in front of his wife and children.

Eventually Nelson pled guilty to 20 charges, including five of conspiracy to murder and was sentenced to 10 years imprisonment. A number of charges, including two counts of first degree murder, were dropped as part of his plea bargain.

Following Nelson’s conviction, the BBC Panorama programme Dirty War, broadcast on 8 June 1992, made new claims about Nelson’s involvement in further murders and conspiracies. One allegation was that, following a tip off from Nelson, the Intelligence Corps kept secret a plot to murder Paddy McGrory, a solicitor representing the families of the Gibraltar Three.

In January 1993, Gerry Adams claimed the British government was fully aware of Nelson’s involvement in Ulster Resistance‘s January 1988 importation of weapons from South Africa including 200 AK47 rifles; 90 Browning pistols; 500 fragmentation grenades and 12 RPG 7 rocket launchers. This, together with the reliance by loyalists on leaked, although often outdated, military and police intelligence files on potential targets, meant that by 1992 loyalists were killing more than the republicans, a situation not seen since 1975.

Sir Patrick Mayhew, Northern Ireland Secretary, declared the Nelson affair was dead and buried. However, in May 1993, a San Francisco, California judge, in the extradition case of a Maze prisoner escapee, James Joseph “Jimmy” Smyth, who had used the alias “Jimmy Lynch”, demanded disclosure in court of suppressed reports, including documents on Nelson, or risk having the case dismissed.

The papers were not produced, but Smyth was eventually extradited back to Northern Ireland and to jail on 17 August 1996.

Nelson was accused of setting up the killing of an Irish republican, Francisco Notarantonio, to divert the UDA from targeting Frederico Scappatici, an alleged IRA informer. Loyalist Sam McCrory shot Notarantonio, aged 66, who had been interned in 1971.  but had not been active for many years, dead at his home in Ballymurphy, West Belfast on 9 October 1987.

Nelson died, reportedly from a brain haemorrhage, on 11 April 2003, aged 55, after suffering a heart attack a fortnight before his death. Although news reports described Nelson as living in a secret location in England, it was not disclosed whether he had been granted witness protection as part of the supergrass policy.