It will hardly come as a surprise to anyone that the leadership of Islamic State top  the list of the most wanted terrorists on  earth and I am in no doubt that eventually justice will catch up with them all  and they will ultimately pay for their heinous crimes against humanity.

If not in this life , then surely Karma will catch up with them in the next and instead of finding countless virgins waiting for them in paradise , these will be thrown into the eternal flames of hell and burn to the end of time.

The state-run SANA news agency said that most of those killed in Saturday’s attacks were elderly people, women and children, while opposition activists said many of the victims were Syrian soldiers and pro-government militiamen and their families.

The killings are some of the worst carried out by the extremist group, which controls large parts of Syria and Iraq and has killed thousands of people in both countries.

Abu Bakr al-Baghdadi (Arabic: أبو بكر البغدادي‎; born 28 July 1971 as Ibrahim Awad Ibrahim al-Badri)[8][9][10] is the leader[11][12][13] of the Islamic State of Iraq and the Levant (ISIL), also known as ISIS or Daesh, an Islamic extremist group in western Iraq, Libya, northeast Nigeria, and Syria. He has been proclaimed by his followers to be a caliph.[14]

On 4 October 2011, the U.S. State Department listed al-Baghdadi as a Specially Designated Global Terrorist and announced a reward of up to US$10 million for information leading to his capture or death.[14][15] Only the leader of al-Qaeda, Ayman al-Zawahiri, has a larger reward offered for his capture or death (US$25 million).[16] The United States has also accused al-Baghdadi of kidnapping, enslaving, and repeatedly raping an American citizen who was later killed.[17]

Over time, there have been a number of reports of Al-Baghdadi’s death or injury; however, none has been verified.

Abd al-Rahman Mustafa al-Qaduli (Arabic: عبد الرحمن مصطفى القادولي‎), alternatively known as Abu Ala al-Afri (أبو علاء العفري), was the Deputy leader of the Islamic State of Iraq and the Levant. It is believed he ascended to this position following unconfirmed reports of current leader Abu Bakr al-Baghdadi being severely injured by an airstrike, leaving him unable to retain direct leadership of the group.[1]

On May 14, 2014, Abu Ala al-Afri was listed as a Specially Designated Global Terrorist by the U.S Treasury Department.[2]

On May 5, 2015, the U.S. State Department announced a reward of up to US$7 million for information leading to al-Afri’s capture or death.[3]

The Iraqi Ministry of Defense reported that Abu Ala al-Afri had been killed in a US-led coalition airstrike in Tel Afar, on May 12, 2015, along with dozens of other ISIL militants that were present.[4] US Spokesmen were unable to corroborate the reports, with some unnamed officials expressing skepticism of the Iraqi claims 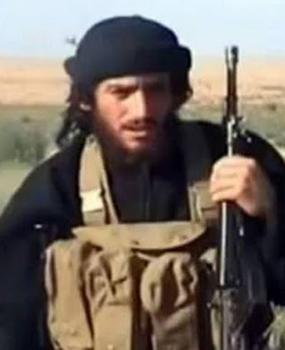 Abu Muhammad al-Adnani al-Shami (Arabic: أبو محمد العدناني‎. born 1977 or 1978), whose original name is Taha Subhi Falaha (طه صبحي فلاحة), is the official spokesperson and a senior leader of the Islamic State of Iraq and the Levant, and its primary conduit for communicating official messages.[5][6] He is also the emir of ISIL in Syria.[3] The U.S. State Department Rewards for Justice Program announced a reward up to US$5 million for information leading to his capture on May 5, 2015.[2][7] On January 4, 2016, Abu Mohammad al-Adani was reportedly severely injured by an Iraqi airstrike on Barwana, near Hit, Iraq. It was reported that he had lost a large amount of blood and had been moved to Mosul for recovery

A veteran of the 2008 Russo-Georgian War, Batirashvili became a jihadist after being discharged from the Georgian military and served in various command positions with Islamist militant groups fighting in the Syrian civil war. Batirashvili was previously the leader of the rebel group Katibat al-Muhajireen (Emigrants Brigade), also known as the Muhajireen Brigade, and its successor, Jaish al-Muhajireen wal-Ansar (Army of Emigrants and Supporters).

In May 2013, Batirashvili was appointed northern commander for ISIL, with authority over ISIL’s military operations and ISIL’s forces in northern Syria, specifically Aleppo, al-Raqqah, Latakia, and northern Idlib Provinces. As of late 2013, he was the ISIL amir (leader) for northern Syria and was located in and around Aleppo Province. He was also in charge of fighters from Chechnya and elsewhere in the Caucasus.[9] Units under his command have participated in major assaults on Syrian military bases in and around Aleppo, including the capture of Menagh Airbase in August 2013.[3] He is considered “one of the most influential military leaders of the Syrian opposition forces”.[2] As of mid-2014, Batirashvili was a senior ISIL commander and Shura Council member based in al-Raqqah, Syria.[9]

The US Treasury Department added Batirashvili to its list of Specially Designated Global Terrorists on 24 September 2014.[10] On 5 May 2015, The U.S. State Department Rewards for Justice Program announced a reward up to US$5 million for information leading to his capture.