Extracts from my Autobiography

Boarding the Virgin train at London Euston I ignored the day trippers and business travellers and took my seat opposite my brother David and we settled in for the three hour journey north to Preston, in Lancashire. I had been to Preston a few times on business trips previously and to be honest it hadn’t really left an impression on me. But the thought of what or who was waiting for me at the other end now filled me with apprehension and overwhelming anxiety.

I was going to confront the ghosts of my past.

It was mid January and the UK was in the grip of the coldest winter in decades and outside a heavy snow was falling and the landscape was covered in a thick blanket of white. Looking out the window I watched silently as the train gathered speed and the country scenery flashed past in a blurry haze. David was snoring quietly and I was glad of the silence, I had to prepare myself for what was to come.

I took the letter out of my pocket and read  the words for the thousandth time. 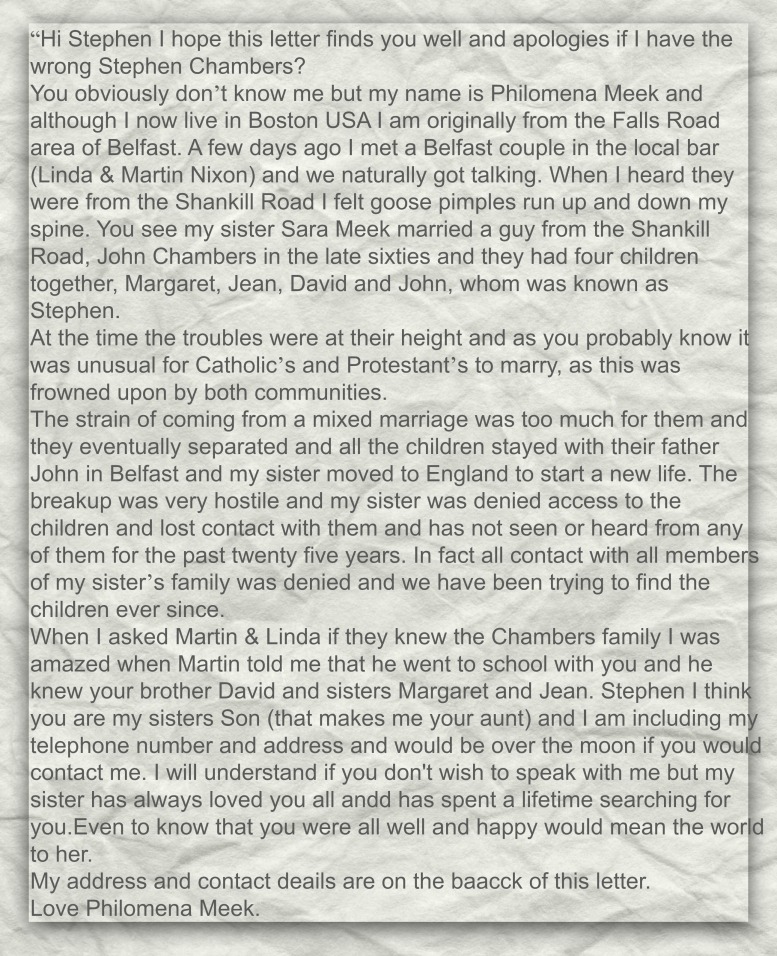 The letter had been given to my sister back in Belfast and had eventually found its way to me in London.

I had spent most of my life believing my mother was dead and knowing next to nothing about her. But to my amazement when I was a teenager I had learnt that she was in fact not dead, but alive and well, but due to the nature of my parents breakup and my father’s family being ultra Loyalist from the Shankill Road in Loyalist West Belfast she had been denied access to us and her memory and all traces of her had been erased from our lives’.

As I grew older I began trying to find out more about my mother , but this was impossible due to that fact my father’s family refused to discuss her and I was told to let sleeping dogs sleep. When I was in my late teens I began a secret search for  mum and I approached the Salvation Army and other agencies who I thought could help me find her, But due to lack of information ( I didn’t even know her maiden name) there was nothing they could do.

When I was sixteen and doing Job experience in The Mater hospital Belfast I met a wonderful lady called Muriel Wilson and after hearing my story she took me under her wing and tried to help me find mum. She was Catholic and up until this stage in my life I had never really spoken to a catholic , as I viewed them all as my enemy. But Muriel taught me that we weren’t so different after all and I started to re-examine my fanatical hatred towards Catholics.

Going against the very fabric of my Loyalist culture Muriel put me in touch with a kind Catholic priest and he also joined the secret hunt for my missing mother. But alas, this , like all other attempts failed as I knew nothing whatsoever about my mother and there was no one I could turn too. I eventually give up the search and had accepted that perhaps I would never find her and as my life moved on my mother’s absence took a back seat to the trivia of day to day living.

Then the letter arrived