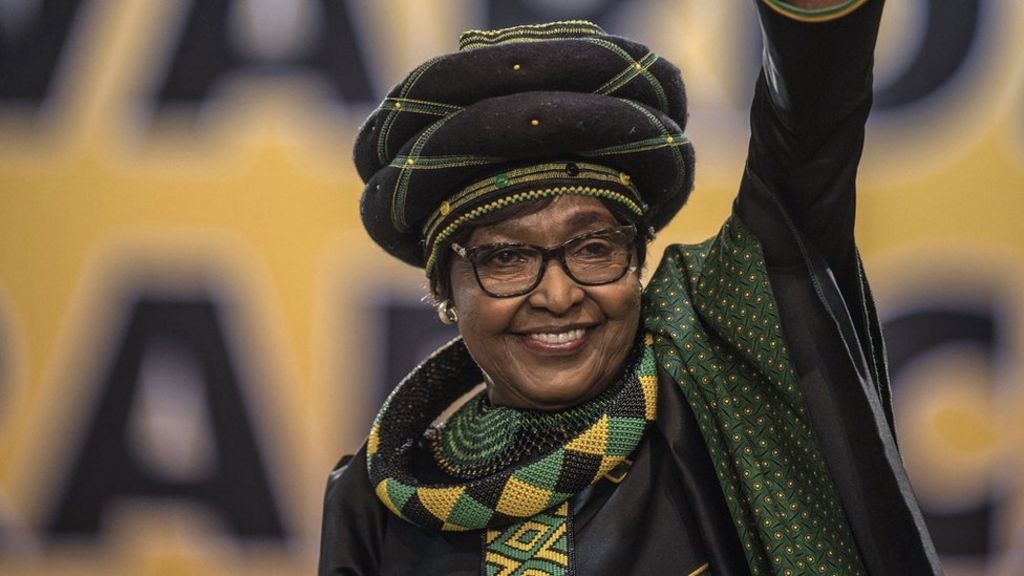 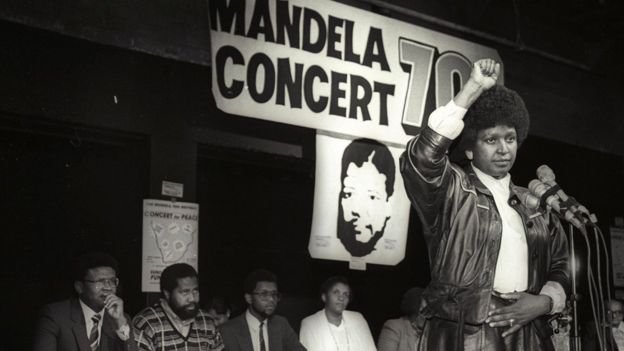 The couple – famously pictured hand-in-hand as Mr Mandela walked free from prison after 27 years – were a symbol of the anti-apartheid struggle for nearly three decades.

However, in later years her reputation became tainted legally and politically.

Family spokesman Victor Dlamini said Mrs Mandela “succumbed peacefully in the early hours of Monday afternoon surrounded by her family and loved ones” following a long illness, which had seen her go in and out of hospital since the start of the year.

Retired archbishop and Nobel laureate Desmond Tutu praised her as a “defining symbol of the struggle against apartheid”.

“Her courageous defiance was deeply inspirational to me, and to generations of activists,” he added.

Necklacing is the practice of summary execution and torture carried out by forcing a rubber tire, filled with petrol, around a victim’s chest and arms, and setting it on fire. The victim may take up to 20 minutes to die, suffering severe burns in the process.

The practice appears to have begun in the Eastern Cape area of South Africa in the mid-1980s. One incident sometimes cited as the first recorded instance of necklacing took place in Uitenhage on 23 March 1985 when a group of people killed Benjamin Kinikini, a local councillor who was accused of having links to a vigilante group.

Kinikini and members of his family were dragged out of their house, stabbed to death, and their bodies set on fire.

Two of those judged to be the perpetrators, Wellington Mielies, 26, and Moses Jantjies, 23, were hanged on 1 September 1987.

But in this case the victims were killed by stabbing, and not by burning tires.

Something similar seems to have happened in the killing of Matthew Goniwe and his fellow anti-apartheid activists by the police in July 1985.

Necklacing was used by the black community to punish its members who were perceived as collaborators with the apartheid government.

These included black policemen, town councilors and others, as well as their relatives and associates. The practice was often carried out in the name of the African National Congress, although the ANC executive body condemned it.

In 1986 Winnie Mandela, then-wife of the imprisoned Nelson Mandela, stated

which was widely seen as an explicit endorsement of necklacing, which at the time caused the ANC to distance itself from her,although she later took on a number of official positions within the party. The number of deaths per month in South Africa related to political unrest as a whole from 1992 through 1995 ranged from 54 to 605 and averaged 244.

These figures are inclusive of massacres as well as deaths not attributed to necklacing.

The first victim of necklacing, according to the South African Truth and Reconciliation Commission, was a young woman, Maki Skosana, on 20 July 1985.

Moloko said her sister was burned to death with a tire around her neck while attending the funeral of one of the youths. Her body had been scorched by fire and some broken pieces of glass had been inserted into her vagina, Moloko told the committee. Moloko added that a big rock had been thrown on her face after she had been killed.

Photojournalist Kevin Carter was the first to photograph a public execution by necklacing in South Africa in the mid-1980s. He later spoke of the images:

He went on to say:

After having seen so many necklacings on the news, it occurs to me that either many others were being performed (off camera as it were) and this was just the tip of the iceberg, or that the presence of the camera completed the last requirement, and acted as a catalyst in this terrible reaction.

The strong message that was being sent, was only meaningful if it were carried by the media. It was not more about the warning (others) than about causing one person pain. The question that haunts me is ‘would those people have been necklaced, if there was no media coverage?’

‘Necklacing’ represented the worst of the excesses committed in the name of the uprising. This was a particularly gruesome form of mob justice, reserved for those thought to be government collaborators, informers and black policemen. The executioners would force a car tire over the head and around the arms of the suspect, drench it in petrol, and set it alight. Immobilized, the victim burned to death.

Archbishop Desmond Tutu once famously saved a near victim of necklacing when he rushed into a large gathered crowd and threw his arms around a man accused of being a police informant, who was about to be killed. Tutu’s actions, which were caught on film, caused the crowd to release the man.

Some commentators have noted that the practice of necklacing served to escalate the levels of violence during the township wars of the 1980s and early 1990s as security force members became brutalized and afraid that they might fall victim to the practice.

This practice of lynching is found in Haiti. It was prominently used against supporters of Jean-Claude Duvalier‘s dictatorship at the beginning of the democratic transition, from 1986 to 1990.

In the early 1990s, university students in Abidjan, Cote d’Ivoire were plagued by burglars stealing from their dormitories. The students took matters into their own hands by capturing the alleged thieves, and then executed them by placing tires around their necks and setting the tires on fire. Ivorian police, powerless to stop these necklacings, could do nothing but stand by and watch

In 2006, at least one person died in Nigeria by necklacing in the deadly Muslim protests over satirical cartoon drawings of Muhammad.

Necklacing was also widely used in the armed insurrection led by the Janatha Vimukthi Peramuna in Sri Lanka. A graphic description of one such necklacing appears in the book The Island of Blood by journalist Anita Pratap.