This young crewman of a US Navy “Dumbo” PBY rescue mission has just jumped into the water of Rabaul Harbor to rescue a badly burned Marine pilot who was shot down while bombing the Japanese-held fortress of Rabaul.

Since Japanese coastal defense guns were firing at the plane while it was in the water during take-off, this brave young man, after rescuing the pilot, manned his position as machine gunner without taking time to put on his clothes.

Photo taken by Horace Bristol (1908-1997). In 1941, Bristol was recruited to the U.S. Naval Aviation Photographic Unit, as one of six photographers under the command of Captain Edward J. Steichen, documenting World War II in places such as South Africa, and Japan. He ended up being on the plane the gunner was serving on, which was used to rescue people from Rabaul Bay (New Britain Island, Papua New Guinea), when this occurred. In an article from a December 2002 issue of B&W magazine he remembers:

“…we got a call to pick up an airman who was down in the Bay. The Japanese were shooting at him from the island, and when they saw us they started shooting at us. The man who was shot down was temporarily blinded, so one of our crew stripped off his clothes and jumped in to bring him aboard. He couldn’t have swum very well wearing his boots and clothes. As soon as we could, we took off. We weren’t waiting around for anybody to put on formal clothes. We were being shot at and wanted to get the hell out of there. The naked man got back into his position at his gun in the blister of the plane.”

The identity of the gunner has never been established . 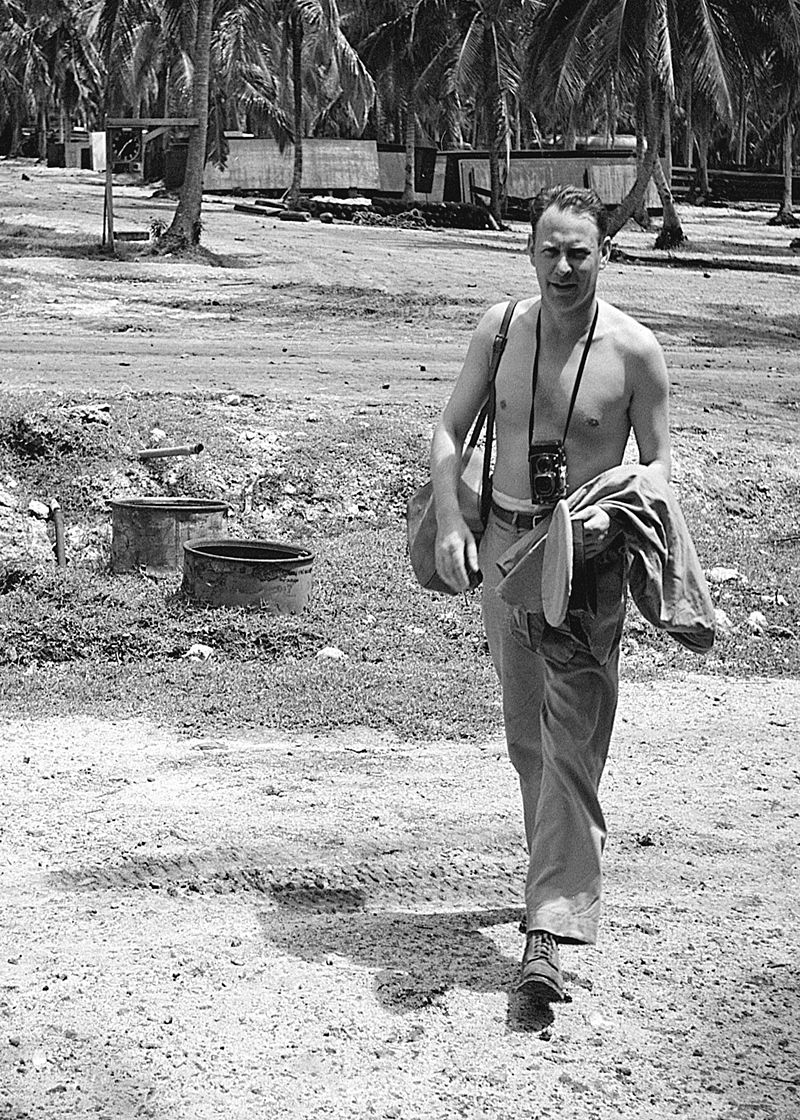 Bristol was born and raised in Whittier, California, and attended the Art Center of Los Angeles, originally majoring in architecture. In 1933, he moved to San Francisco to work in commercial photography, and met Ansel Adams, who lived near his studio. Through his friendship with Adams, he met Edward Weston, Imogen Cunningham, and other artists. He was copy reader at night for the Los Angeles Times after graduating from Belmont High School.

In 1936, Bristol became a part of Life‘s founding photographers, and in 1938, began to document migrant farmers in California’s central valley with John Steinbeck, recording the Great Depression, photographs that would later be called the Grapes of Wrath collection.

In 1941, Bristol was recruited to the U.S. Naval Aviation Photographic Unit, as one of six photographers under the command of Captain Edward J. Steichen,  documenting World War II in places such as South Africa, and Japan.

Bristol helped to document the invasions of North Africa, Iwo Jima, and Okinawa.

Following his documentation of World War II, Bristol settled in Tokyo, Japan, selling his photographs to magazines in Europe and the United States, and becoming the Asian correspondent to Fortune. He published several books, and established the East-West Photo Agency.

Following the death of his wife in 1956, Bristol burned all his negatives, packed his photographs into storage, and retired from photography. He went on to remarry, and have two children. He returned to the United States, and after 30 years, recovered the photographs from storage, to share with his family.

Subsequently he approached his alma mater, Art Center College of Design, where the World War II and migrant worker photographs became the subject of a 1989 solo exhibition. The migrant worker photos would go on to be part of the J. Paul Getty Museum‘s Grapes of Wrath series.

Bristol’s work is displayed around the world, including the Getty Museum and the Los Angeles County Museum of Art. In 2006, a documentary was made, The Compassionate Eye: Horace Bristol, Photojournalist, written and directed by David Rabinovitch.

Go on surprise me !