In the face of the deadly threat posed by the so-called Islamic State, many Kurdish women decide not to leave their survival to fate. Instead, they fight for their lives and their future. Taking up arms, they join the YPG – Kurdish People’s Protection Units that defend their town’s borders from the militants. The enemy fears female warriors. Jihadists believe if they are killed by a woman they will go straight to hell. 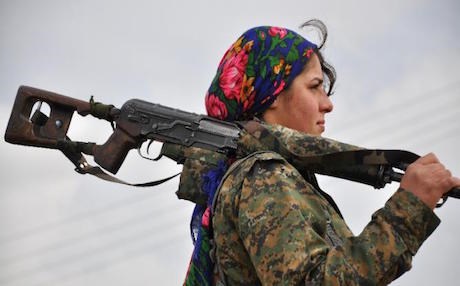 Female fighters from the Kurdish People’s Protection Unit (YPG) take a break on the front line in the northeastern Syrian city of Hasakeh.

The Women’s Protection Units or Women’s Defense Units (Kurdish: Yekîneyên Parastina Jin‎) (YPJ) is a military organization that was set up in 2012 as the female brigade of the leftist